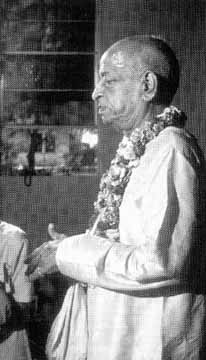 My dear Srila Prabhupada, I was in prison within the prison of Devi-Dhama, yet you effortlessly came in and freed me. Because you saved my life, from that day on my life belongs to you .

As a river flows to the sea, my natural desire to see you overcame all material obstacles and brought me to Vrindavana, to your lotus feet. You welcomed me and encouraged me to stay and “preach to the Indians.”

Owing one’s life to someone is a momentous, overwhelming experience. Each new breath one takes, each new day that dawns simply increases one’s indebtedness to one’s saviour. As one cannot repay God for His gifts, so much more His cherished servant. Indeed, the very notion of repayment is risible. Still, knowing how Krsna’s fame is founded upon transmuting the impossible into the possible, I prayed to Him for guidance and He inspired me to go to Gauda-desa.

Because you appeared there, I conclusively decided that I would love everything about it. And indeed I did. I loved the language, the script and the way all Bengalis had a soft spot for Mahaprabhu. Truly, scratch a Bengali and you find a vaisnava. I loved the vibrant green and gold countryside, the Ganga, the pukurs (ponds). I loved the food: Govinda bhog is the best kept secret in the rice universe! And the fruit! My goodness! Mountains of lychees in the spring, bigger mountains of juicy Fuzly mangoes, big as rugby-balls, in the summer, and pots of heady tal-ras in the winter – drink it before noon or you’ll get intoxicated!

I was fortunate to travel there before TV, satellite communications and rampant materialisitic propaganda. In my time entertainment meant yatras – stage plays based on the Mahabharata and Ramayana and performances of akhanda kirtans.

I simply could not get enough of Bengal; I travelled to every nook and corner, bathed in all the ghats and pukurs, took the dust of every holy place and distributed your Gitar Gan in every town and village. Yet, despite this kaleidoscope of beauty I kept returning to the places directly associated with you, my master.

Baro Bazaar – where you appeared. The Suvarna Vanik community’s Sona Durga temple across the street from your house where, above the main Devi shrine, I discovered a small, intimate temple of Krsna-Balarama. There, the old Oriya pujari would tell me, “Before going to ‘merika your Guru Maharaj would come here daily at noon and play the harmonium and sing for Kisna”.

Ultadanga Road – the tree-shaded roof of the house where you first met your master, Srila Bhaktisiddhanta Sarasvati Thakura. In the corner a tiny, tiny room where this prince of aristocratic devotees performed his bhajan. How can I describe such blissful experiences? Such undeserved nectar? Far from beginning a scheme of repayment, I was sucked deeper and deeper in your debt! And it does not end – to this very day it increases.

Discovering first hand your background as an aristocratic vaisnava gentleman did not answer my inner questions. After all, I knew what it took to save me, and I knew it was beyond the power of a first class Bengali vaisnava gentleman. Way, way beyond.

Then, in the month of Magha 1977 I was told to take a sankirtan party to Adi Saptagram on the western bank of the Ganga, near the birthplace of Raghunatha Das Gosvami. This is the main temple of the Suvarna Vanik community and its presiding deity is Sri Sadbhuja Caitanya with the two hands of Lord Ramacandra holding the bow and arrow, the two hands of Krsna holding the flute and the two hands of Caitanya Mahaprabhu holding the danda and the kamandalu (water pot). This deity had manifested due to the intense bhakti of Uddharana Datta Thakur, one of the twelve gopalas (cowherd boys) who descended from Gokula with Lord Nityananda Prabhu.

The day I came there was the festival of Uddharana Datta Thakur and all the gentlemen and ladies of the Suvarna Vanik community were there. Some years before, on your first return from America, they had honored you at this temple on the same day. At that time you requested your disciples to send a sankirtan party every year.

Talks were given glorifying your achievements, kirtan was held and sumptuous prasadam was honoured. As I looked around at the elegant gentlemen, the Mulliks and the Des’, in their starched dhotis of a hundred fine folds, and at the ladies, cooking puspanna rice and richly decorated with costly jewellery and gold-laced saris, I marvelled at their aristocracy, devotion and consummate class. I remembered your description of them, how they had so much gold, they actually owned Calcutta – sold it to the British in fact – how you described them as fallen demigods. How proud they were of you, how blessed they felt that you had appeared in their community.

Over the years I returned to Saptagram many times with my sankirtan party and the pujaris told me wonderful stories. Uddharana Datta Thakura and Raghunatha Das Gosvami belonged to your community, the Suvarna Vanik Kayasthas, and were immensely rich, influential and aristocratic vaisnavas. Uddharana Datta Thakur was especially dear to Lord Nityananda Prabhu.

One day, Lord Nityananda came there to take prasad. As He sat in the courtyard of the temple, surrounded by His associates, a delegation of local Brahmanas appeared. They asked the Lord, “You belong to a first class Brahmana caste, why are you accepting prasad from a member of the Kayastha (lower) order? You should take prasadam with us brahmanas.”

As this conversation was going on, Uddharana Datta Thakur came out of the kitchen where he was personally cooking for the Lord. He held a swizzle stick (used to churn dahl) in his hand. Without saying a word, Lord Nityananda took the stick from His devotee’s hand and pushed into the ground in front of the brahmana delegation. Before their astonished eyes the stick began to sprout twigs and buds and immediately grew into a large Madhavi-lata tree, its blooming and fragrant white flowers cascading on all sides. The brahmanas were dumbfounded and in complete silence got up and left. That Madhavi tree is still there, giving its shade and in the evenings the sweetest flowers I have ever experienced.

Behind the temple is a very large pukur and one day, as I came out of the water after bathing, the pujari said, “Now you have achieved the lotus feet of Lord Nityananda.” I replied, “What do you mean?” He then related the story how once, when Lord Nityananda bathed there, He lost one of His silver ankle bracelets. Uddharana Datta Thakur engaged hundreds of his servants and had the huge pukur dredged – totally emptied of water – but the ankle bracelet was never found. Thus, anyone who bathes there is at once directly purified by Lord Nityananda Prabhu, on the principle of His paraphernalia being non-different from Himself.