Harinama Sankirtana and Food for Life in Mayapur Villages 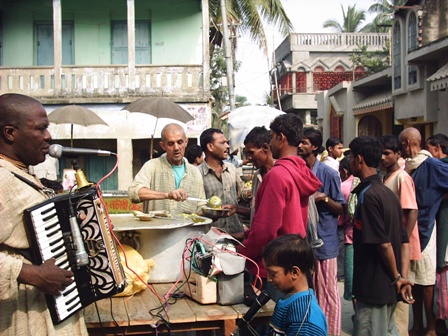 That Lord Caitanya came to inaugurate congregational chanting in Kali Yuga, and that he himself set the example by chanting all over the streets of Nadia, has set the tone for the newly formed “Village to Village Harinam Party.” Shastra dasa, formerly the Director of Lord Krishna’s Academy in Africa, is now residing in Mayapur and is using his 25 years of experience in Harinama and Food For Life Distribution in African Villages to expand this important preaching program all over the nine islands of Navadvipa and beyond.

“I just feel that Harinama should always continue here in all the villages, as it did in Lord Caitanya’s time, and not only once a year during Gaura Purnima parikrama….we also add Food For Life, which is very welcome in the villages as they are very poor around here. Presently the Temple management has a daily feeding program on its own campus, which is keeping the FFL Department very busy, but there is no regular program of devotees going out into the villages…thus the Temple Management is encouraging our program, which has also unofficially been named the “Grhastha Harinam Party,” as it is run by Grhasthas residing in Mayapur.” – Shastra dasa, Organiser

He also has quotes from scripture and Srila Prabhupada on hand to show the importance of this program pasted around the ISKCON campus:

“When the tumultuous vibration of sankirtana resounded, all good fortune immediately awakened, and the sound penetrated the whole universe through the fourteen planetary systems.”
(Madhya Lila 11.216 and 217)
“The Lord ordered all the citizens of Mayapur-Navadvipa to chant the Hare Krishna mantra, and in each and every home they began performing harinama-sankirtana regularly.
(Caitanya Caritamrita, Adi-Lila 17.122)
When the sankirtana movement thus started, no one in Navadvipa could hear any sound other than the words “Hari! Hari!” and the beating of the mrdanga and clashing of hand bells.”
(Caitanya Caritamrita, Adi-Lila 17. 123) 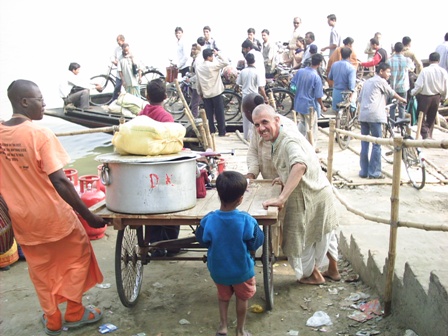 “Now in Mayapur there are two much important programs, namely, first of all, a school must be started in English medium….The second important program is this distribution of prasadam, without any discrimination, so that everyone will get equal portion, no matter how little or how much is there.”
Letter to Bhavananda, Auckland, 14 March 1972
“The news that you are able to keep up the prasadam program which is now up to 1500 persons on Sunday is very welcome and I hope you can continue this without stoppage.”
Letter to Jayapataka Maharaja and Bhavananda, 9 May 1974
“Regarding food distribution, they may come to take at our Temple. With travelling sankirtana we can distribute wherever we go…”
Letter to Jayapataka Maharaja, Vrndavana, 28 September 1976

Shastra dasa started performing the Harinama alone riding on bicycle rikshaw and later Madana Mohana Prabhu from Canada joined him. They purchased their own flat rikshaw and sound equipment and going round Navadvipa, Svarup Ganj, Mahesh Ganj and other areas. Then they started adding small packets of dried Prasadam, then expanded into adding the traditional kichari FFL Prasadam as manpower increased. Many visiting devotees accompany the party and all agree that this is a wonderful program that should be expanded here in Mayapur. It also creates good relations among the temple and villagers.

Shastra dasa said he is inspired by his spiritual master HH Bhakti-Tirtha Swami and is collecting and distributing the prasadam on his behalf.

Shastra dasa can be contacted at Shastra.BTS@pamho.net for more exciting FFL and Harinam pictures in the Holy Dhama..

Attached are pictures of the latest Harinama/Food For Life program held in Navadvipa Town, near the boat ghat underneath the newly-erected Dioramas of Lord Caitanya and Nityananda. 800 people were fed that day.

Coming from the U.S, during my last visit to Sri Dhama Mayapur, I found this to be the most attractive, practical and great preaching programme. May Srila Prabhupada and Lord Caitanya bless these devotees to continue this programme and expand. 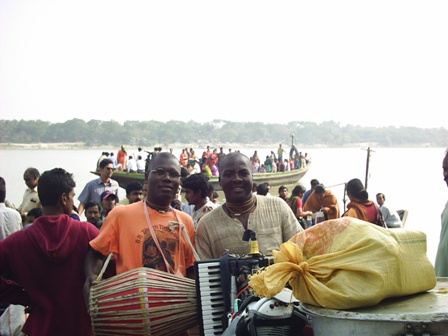 Food For All
The Simple Temple - Chowpatty online