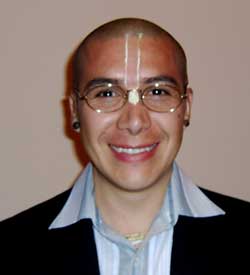 Srila Krishnadas Kaviraja Goswami in his Caitanya Caritamrita mentions that Sri Caitanya Mahaprabhu has taught us not to accept anything without first questioning it. Don’t accept anything blindly. In western philosophy this instruction of Mahaprabhu is very similar to the concept of Critical thinking, which consists of a mental process of analyzing or evaluating information, particularly statements or propositions that people have offered as true. However, one must come to the point of realizing that there are things which are situated beyond space and time and beyond the reach of our poor capacity of reasoning and thinking. Truths which can be realized only throughout devotion and service. Nevertheless, devotion shouldn’t be an excuse to blindly follow. This is a very important point of our Vaisnava philosophy and only by following this instruction we will avoid sentimentalism and blind followers.

An Example of Critical Thinking

Vedic statements were taken as axiomatic truths and people in general accepted those truths without questioning. In modern times, the advancement of sciences offers us the opportunity to prove some of the Vedic statements. Let’s take the famous example of the antiseptic properties of cow dung. The Vedas say that after touching stool one should take a bath because he/she gets contaminated. On the other hand, the Vedas say that cow dung, which is the stool of an animal, is pure and can even be used for religious ceremonies. A thoughtful person could question this apparent contradiction, and as a matter of fact, some scientists have taken cow dung for laboratory analysis and have found out that actually cow dung is pure and contains antiseptic properties. Another example; the Vedas also say that the waters of the Ganga river remain always pure. However, an evaluation, undertaken by Metro Economica, U.K. the Institute for Environment Studies, the Netherlands, and the Administrative Staff College of India (ASCI), found in 2003 that Coliform bacteria levels are above two lakh MPN (Most Probable Number) as against 5,000, the national water quality standard fixed by Central Pollution Control Board (CPCB). My critical thinking mentality is questioning: Is the Ganga river actually pure?

Notwithstanding, it has been discovered that Ganga waters are antimicrobial waters due to the existence of millions of bacteriophage “eater of bacteria,” viruses which grow on bacterial hosts and eat them up. This explains why in Mayapur we used to only filtrate the Ganga water using an ordinary water filter and drink it safely for years. So critical thinking can invigorate our faith after coming to know that some statements of the Vedas have being empirically tested.

The Limits of Critical Thinking

Nevertheless, there are certain Vedic statements which cannot undergo empirical test due to the limitations of the scientific method. Still, this axiomatic truths have to be realized from within and not just blindly believed. There is no scope for blindly believing in the Vaisnava philosophy.

There should be a criterion based on which one may exercise his/her right to critical thinking,. Otherwise, one may end on the other side of the road, one may become a fault finder. The immediate question is, what is that criterion? In ancient Vedic times the Vedic statements were the ideal in terms on which something was judged. For instance, if I were to criticize a person?€?s behavior, I had to make reference to the Vedas. What does the Vedas say about proper behavior and on that base determine if the person is actually misbehaving or not. If the person behaves according to the Vedic policies, then I am just finding faults.

Critical thinking can be easily confused with fault finding. Fault finding may be influenced by envy and other anarthas. Like the crows, fault finders enjoy finding mistakes in others. Therefore, as mentioned before, a criterion must be settle in order to properly exercise our right to critical thinking. Here we have the same question again; what is the right criterion in ISKCON? The answer is actually very simple, this criterion are the instructions of the Founder Acarya, Srila Prabhupada. So the difference between Critical Thinking and fault finding is that, the former has a criterion, or an ideal in terms on which something can be judge and that ideal on terms is Srila Prabhupada’s instructions. If someone is acting in a way Srila Prabhupada has taught us is wrong, then by properly following the Vaisnava etiquette one should address the issue and not remain silent. The later is just an act of fault finding or blaming and is condemned by our previous Acharyas. The example here is Srila Prabhupada Himself. One may say that Srila Prabhupada was a fault finder, because He criticized heavily the corrupt leaders of the world. However, His Divine Grace used as His criterion the teachings of His spiritual master.

By the way, those who are pure have nothing to fear, because purity is the strength and shines by herself, like pure gold.

Challenges to the Astronomical Paradigm