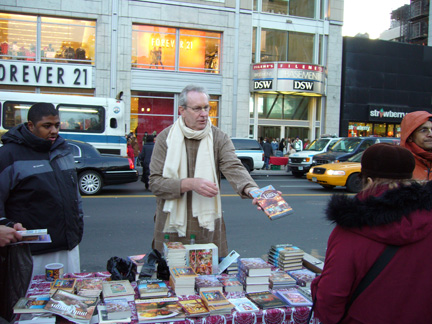 “Material prescribed duties” are simply honest, responsible work.(1) Regarding sva-dharma (prescribed duties), the Gita, Bhagavatam, and Cc all explain dharma and sva-dharma, and their teachings should be coordinated for a good understanding. Krishna and Prabhupada teach that karma-yoga is the preliminary stage of bhakti.(2) For ISKCON followers, karma-yoga means that devotees offer the results of their work, from one to one-hundred percent, to the sankirtana movement. To the extent that they offer their wealth and lives, they are advanced.(3) The Bhagavatam reinforces this point by teaching that whether one’s sva-dharma is material or spiritual it should provoke the glorification of the Supreme.(4) Although temple maintenance and deity worship are all important adjuncts to sankirtana, the essential ISKCON dharma or sva-dharma is sankirtana-yajna,(5) and Mahaprabhu asks us to offer our words, wealth, life and intelligence to sankirtana.(6) He teaches that dharma is established by the mahajanas,(7) and thus our ISKCON dharma is established by Mahaprabhu and Prabhupada.

In Ekendra’s article (http://www.dandavats.com/?p=2584#), his understanding of the tension between one’s material and spiritual sva-dharmas is not adequately developed.(8) The ISKCON process of transcending material sva-dharmas is done by following Mahaprabhu’s and Prabhupada’s instructions to engage in sankirtana-yajna as much as possible. In the Gita, chapter three verses nine to fifteen, Krishna establishes the importance of yajna, and its intimate connection with karma-yoga. Then in chapter four verse thirteen, He states that He has established the four varnas to cooperate for yajna.(9) In verse twenty, He explains that work (for yajna) should be done without attachment to the results, and from twenty-three to thirty-three He launches into a technical discussion of yajnas. Finally, in verse thirty-four, He tells us to accept a guru to learn about yajna.

In conclusion, since Prabhupada quantifies a person’s karma-yoga as one to one-hundred percent, it could be argued that ISKCON’s collective remittance to the BBT is an indicator of ISKCON’s karma-yoga–a quantification of the society’s advancement. If so, let’s all work together to increase annual remittances from a paltry $5 million worldwide to the hundreds of millions that they should be. Particularly, those of us who are leaders, brahmanas, and even initiated devotees are responsible (sva-dharma) to work for such results.

(1) ACBS conversation in N.V. 6/26/76, ‘The householders should earn a livelihood by honorable means” Letter to Pusta Krishna 10/29/77, ‘If you feel Maya attracting, then live an honest life as a householder and contribute to our movement.’ ACBS letter to Harikesa 2/1/77 ‘The tendency you report of the householders living at the expense of others in our Society, is not good. One way to earn money is by selling books, they can be given a salary or commission. But if you say that they do not want to do that, yes, they should do some honest work.’ SB
7.14.7 purport, ‘The householders are specifically responsible for seeing that the laws of the Supreme Personality of Godhead are maintained. [‘] As stated in Bhagavad-gita, yajnad bhavati parjanyah [Bg. 3.14]. So that rainfall will be regulated, humanity should perform yajnas, sacrifices.’ SB 2.1.3 lecture Paris
6/12/74, ‘Even formerly, although they were engaged in eating, sleeping, mating, still, they had some responsibility to maintain family. Family means to get one’s self married and take charge of the wife and children and… That is grihastha life.’

(2) BTG, 5/20/56 ‘Yajna’ ‘In the Bhagwad-gita, Krishna recommends that everyone should be engaged in work for the satisfaction of Vishnu. That is the right type of karma or work which leads gradually to the stage of karma-yoga, or the preliminary stage of devotional activities.’

(3) Bg 3.1-5 lecture–L.A. 12/20/68 ‘We should remain in the congested city and preach this Krishna consciousness movement without being affected by this contamination of city life.’ [‘] ‘Link up the results of your work with Krishna. That is called karma-yoga.’ [‘] ‘The more you spend, and the more you become balanceless for spending Krishna, then the more you are benefited. And how one can, unless one is spiritually advanced how he can sacrifice his hard-earned money for Krishna?’ Bg 3.6-10 lecture–L.A. 12/23/68 ‘Devotee means one who has engaged his senses cent percent for the service of the Lord’he is pure devotee.’ [‘] ‘[Rupa Gosvami] showed us the example of how a grihastha should live. Not that out of hundred dollars, ninety-nine percent for my wife, and one percent for Krishna.’ [‘] ‘Anyway, if one cannot sacrifice cent percent, let him sacrifice at least one percent, two percent. The more he does, the more he becomes free from bondage, and the more he uses his earnings for sense gratification, the more he becomes bound by the laws of material nature.’

(4) SB 1.2.3 Man’s sva-dharmas are ‘useless labor if they do not provoke attraction for the message of the Personality of Godhead.’

(5) Cc Adi 3.19 ‘I shall personally inaugurate the religion of the age’nama-sankirtana, the congregational chanting of the holy name.’

(6) Cc Adi 9.39, 42 ‘Distribute this Krishna consciousness movement all over the world. Let people eat these fruits and ultimately become free from old age and death.’ [‘] ‘It is the duty of every living being to perform welfare activities for the benefit of others with his life, wealth, intelligence and words.’ Also, Cc Adi 3.78 purport, ‘Lord Sri Caitanya Mahaprabhu is the father and inaugurator of the sankirtana movement. One who worships Him by sacrificing his life, money, intelligence and words for the sankirtana movement is recognized by the Lord and endowed with His blessings. All others may be said to be foolish, for of all sacrifices in which a man may apply his energy, a sacrifice made for the sankirtana movement is the most glorious.’

(7) Cc Madhya 17.185, ‘A devotee’s behavior establishes the true purpose of religious principles [dharma-stapana-hetu].’ See the purport for the full flavor of this verse.

(8) Ekendra quotes Bg 2.31 purport, but he misses Bg 3.35 purport, ‘Materially, prescribed duties are duties enjoined according to one’s psychophysical condition, under the spell of the modes of material nature. Spiritual duties are as ordered by the spiritual master for the transcendental service of Krishna.’ [‘] ‘..when one transcends the modes of material nature and is fully situated in Krishna consciousness, he can perform anything and everything under the direction of a bona fide spiritual master.’

(9) Light of Bhagavat, verse 21 purport, ‘The intelligent class of men, the brahmanas, are to inspire the kshatriyas and vaisyas in performing sacrifices for spiritual cultivation.’

(10) SB 10.7 purport, ‘The only yajna recommended in this age is sankirtana-yajna. Yajnaih sankirtana-prayair yajanti hi sumedhasah (SB 11.5.32). Yajna is meant to satisfy Vishnu (yajnarthat karmano ‘nyatra loko ‘yam karma-bandhanah [Bg. 3.9]). Because in this age there are no qualified brahmanas, people should perform yajna by chanting the Hare Krishna mantra (yajnaih sankirtana-prayair yajanti hi sumedhasah). Life is meant for yajna, and yajna is performed by the chanting of Hare Krishna, Hare Krishna, Krishna Krishna, Hare Hare/ Hare Rama, Hare Rama, Rama Rama, Hare Hare.’ Note that these are some of Prabhupada’s final words to us.

First time ever for Vrindavan: In October they were the No. 1 temple in the world!

“Get the 20%” for Bhaktivinoda Thakur

28 Comments to “ Prescribed Duties and Sankirtana-yajna”