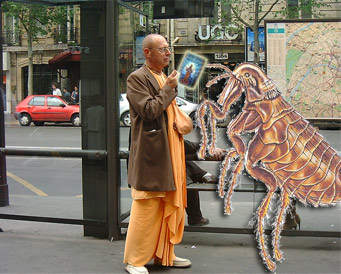 His Holiness Sivarama Swami is the ISKCON GBC Representative for Hungary and is an initiating ISKCON Spiritual Master.

Sivarama Swami was born in Budapest, Hungary in 1949. His family emigrated to Canada during the failed 1956 Hungarian revolution when he was eight years old.

In 1970 he first came in contact with Srila Prabhupada’s teachings, via Prabhupada’s transcendental books. He became an initiated disciple of Srila Prabhupada in 1973 and accepted the renounced order of life in 1979. After serving ISKCON in both Canada and the USA – where he opened and managed temples – HH Sivarama Swami moved to the UK and became temple president at Caitanya College, and the UK national sankirtana leader.

He was requested to accept the responsibility of GBC member in 1986 while serving in the UK. He later became GBC for Hungary having spent time preaching there since 1987.

If you have any question you would like to ask Sivarama Maharaja, then please write to asksrs@gmail.com – Maharaja will try to answer as many questions as possible via his podcasts.