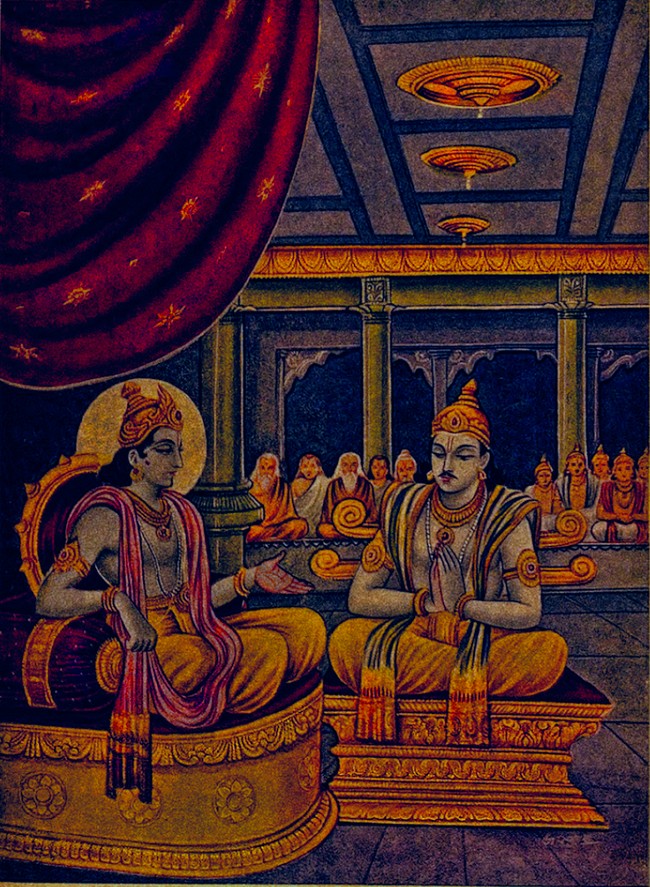 In the interactions between the Lord and His
devotees, both relish the highest happiness.

Bhagavad-gita and other scriptures praise Arjuna for his close relationship with Krishna. Arjuna is known for his mood of friendship (sakha-bhava). Since relationships are by definition reciprocal, not only is Arjuna known as Krishna’s friend, but Krishna is known as Arjuna’s friend. Krishna drove Arjuna’s chariot and is therefore called Partha-sarathi, the “charioteer of Partha (Arjuna).” This name shows Krishna’s special relationship with His devotee Arjuna.

Discussions of devotional service often emphasize the activities devotees perform to please Krishna, but the transcendental relationship between the Lord and His devotees is dynamic, with the loving exchanges originating from both sides. Although Krishna is sympathetic to everyone, He is especially favorable toward His devotees. This is called bhakta-vatsala, the Lord’s affection for His devotees. In Bhagavad-gita (9.29) Krishna tells Arjuna, “I envy no one, nor am I partial to anyone. I am equal to all. But whoever renders service unto Me in devotion is a friend, is in Me, and I am also a friend to him.” It seems contradictory to say that the Lord can be “equal to all” and, at the same time, pays special attention to His devotees. In his purport to this verse, Srila Prabhupada explains that the Lord takes care of all living entities, or jivas, who are all part of Him. He provides all resources necessary to sustain life; indeed, not a blade of grass moves without His sanction. As the Supreme controller who maintains all jivas, Krishna is equal to all.

On the other hand, Krishna distinguishes among His parts according to how they relate to Him. He rewards degree of surrender: “All of them as they surrender unto Me I reward accordingly.” (Bg. 4.11) It is natural, therefore, that Krishna takes special interest in His devotees, who are completely surrendered to Him and are constantly serving Him with love and devotion.

The Lord is a person, and the living entities are also individual persons, although they are minute and the Supreme Lord is unlimited. The analogy of a fire surrounded by many tiny sparks illustrates this concept: The sparks are tiny compared to the original fire, but the composition is the same. Like the relationship between the individual sparks and the fire, an eternal reciprocal relationship exists between the living entities and the Lord.

For the devotee, who is favorably disposed toward the Lord in a relationship of loving service, this relationship is very special and the essence of his or her life. Krishna consciousness means that Krishna is the single focus for the devotee’s actions, words, and desires. When this perfection is achieved, true reciprocity between Krishna and the devotees takes place. Krishna is dear to His devotees, and the devotees are dear to Him. Although He is completely independent and self-satisfied, He accepts service from His devotees, and thus remains at the center of their lives. The reciprocation between Krishna and His devotees, enjoyable for both, is unique. Elsewhere in the Gita(6.30), Krishna confirms this reciprocity: “For one who sees Me everywhere and sees everything in Me, I am never lost, nor is he ever lost to Me.”

In his explanation of the transcendental reciprocation between the Lord and His devotees, Srila Prabhupada gives the example of a diamond ring: the diamond looks more beautiful next to the gold, and the gold looks more beautiful next to the diamond. (Bg. 9.29, purport) In this way, the devotees glorify the Lord, and the Lord does not hesitate to glorify His devotees. He appears in this world just to please His devotees and punish demons who challenge His authority and trouble the devotees. (Bg. 4.8)

When the pure devotee renders service without asking anything in return, Krishna is obliged and “becomes a kind of debtor to the devotees.” (Srimad-Bhagavatam 3.8.27, purport) This fact is often explained in connection with Radharani and the gopis, who are glorified by Caitanya Mahaprabhu as the topmost devotees. No one can control Krishna, the Supreme Personality of Godhead, but Radharani controls Him with her devotion. Likewise, He willingly allowed His mother, Yasoda, to bind and scold Him. He showed His universal form to Arjuna and His four-armed form to Bhismadeva upon hearing their prayers. Krishna is the source of pleasure for His devotees, and He enjoys fulfilling their desires because their desires are purely Krishna conscious.

Krishna’s desire to serve His devotees is prominent in His form as Lord Jagannatha, who presides at the great temple in Puri, Orissa, with His brother Baladeva and sister Subhadra. Histories of the temple have recorded Lord Jagannatha’s pastimes over hundreds of years. Once, Jagannatha and Baladeva disguised Themselves as soldiers and fought alongside Purusottama Maharaja, the king of Puri, in a battle against the king of Kanci. The king of Kanci had insulted Purusottama Maharaja for being a street-sweeper. (The king of Puri traditionally sweeps in front of Jagannatha’s chariot at the annual Ratha-yatra festival.) The humble king did not take the insult personally but as an offense against his beloved Jagannatha, and therefore he went into battle, emerging victorious under the command of the two Lords.

Jagannatha is Krishna, and His transcendental pastimes are unlimited and beyond comprehension. He showed special mercy to His poet-devotee Salabega, whose example illustrates the Lord’s eagerness to reciprocate with His devotees. Born in the beginning of the seventeenth century, Salabega was the son of the widow of a Hindu brahmanaand Lalbeg, a merciless commander of the Moghul Empire. Although his ruthless father intensely hated the Hindus, Salabega’s mother was a fervent devotee of Lord Jagannatha, and she taught her son about the Lord.

Once, as a child or young man, Salabega became very ill, and the attending physicians thought he would die. Salabega miraculously recovered when he heard some devotees singing bhajanas (devotional songs) about Krishna and Jagannatha and he began chanting Jagannatha’s names. This was a pivotal moment in his devotional life. He remembered his mother’s description of Vishnu’s rescue of Gajendra, the king of the elephants, when chased by a crocodile. Like Dhruva Maharaja and Sri Prahlada, Salabega had intense childlike faith in the mercy of the Lord.

As he grew older, Salabega learned to sing and compose devotional songs for the pleasure of Jagannatha, whom he sometimes called Kalia, “the dark darling.” He eventually lived in Vrindavana, but he became anxious to see Lord Jagannatha in Puri. Because of his Muslim birth, Salabega was denied entrance to the Puri temple, and he returned to Vrindavana in disappointment. Lord Jagannatha is known as Patita Pavana, “the savior of the fallen,” and so He comes out from the temple every year during the Ratha-yatra festival to bestow his merciful glance upon all creatures. Salabega planned to visit Puri during the Ratha-yatra festival.

On the way to Puri, however, he fell ill. Lamenting at the thought that he would miss the opportunity to see Jagannatha, he prayed that Jagannatha would wait for him, a sentiment prevalent in one of his songs: satasa pacasha kosha cali na parai/ moha jivajaen nandighose thiva rahi. “It is very difficult to walk the 750 kosas [the distance between Vrindavana and Jagannatha Puri] to see You. Please remain on Nandighosha until then.”

Just then, a miracle occurred. Lord Jagannatha’s cart, called Nandighosha, stopped, and no one could budge it. Jagannatha waited for the arrival of His dear devotee Salabega, who had the opportunity to sing directly to his dark darling and look at Him to his heart’s content. Those who had criticized Salabega for his low birth were humbled as they saw the greatness of Salabega’s devotion.

Salabega often returned to compose songs for Jagannatha at the spot where the Lord had stopped. Today, his samadhi (tomb) stands nearby on Grand Road.

Salabega’s devotion apparently brought the Lord of the universe under his control. In tribute to this pastime, even to this day Lord Jagannatha’s cart stops at Salabega’s samadhi on Grand Road during the Ratha-yatra procession.

Salabega’s example teaches us that birth does not matter, that pure devotion transcends social status, such as being a brahmana. After all, we are not these bodies but spirit souls. To show the world that anyone can become Krishna’s pure devotee, Prabhupada wanted his followers, most of whom were not brahmana as by birth, to be brahminical in devotion and behavior.

Even the most neophyte devotees of the Lord can taste the sweetness of the Lord’s reciprocity. It is said that when we take one step toward Krishna, He takes a hundred steps toward us. When we remember that Vamanadeva, Krishna’s incarnation as a dwarf brahmana, crossed the entire universe with two steps, Krishna’s hundred steps toward us are particularly significant. Even though no one is truly eligible to serve the Supreme Lord, He is so merciful that He accepts the devotee’s humble attempts. (SeeSrimad-Bhagavatam 6.16.25, purport.) The Lord is more eager to reclaim His conditioned parts than they are to return to Him, and He helps His devotees return home, back to Godhead: “Those who worship Me with devotion, meditating on My transcendental form to them I carry what they lack and preserve what they have.” (Bg. 9.22) Even if a devotee does not become completely purified in this lifetime, he or she will be able to continue on the path of devotional service in the next life. Spiritual gains, unlike material gains, are never lost.

The easiest way for us to feel Krishna’s reciprocation is through hearing and chanting His names: Shravanam kirtanam. When Krishna descended as Sri Caitanya Mahaprabhu, He made pure love of God, prema, available to everyone through the chanting of the holy names. In degraded Kali-yuga, the current age of quarrel and hypocrisy, this is the best method to achieve perfect Krishna consciousness. It is the yuga-dharma, the prescribed activity for the age. Krishna’s names are endowed with all His potency, which means He is present in His names. When we chant attentively, He will come to dance on our tongues. What greater reciprocation do we need than this?

Celebration in Mayapur for the appearance of Srila Prabhupada...
Some nice words from Bhaktivedanta Manor volunteer Shaun Bailey (2 min. video)