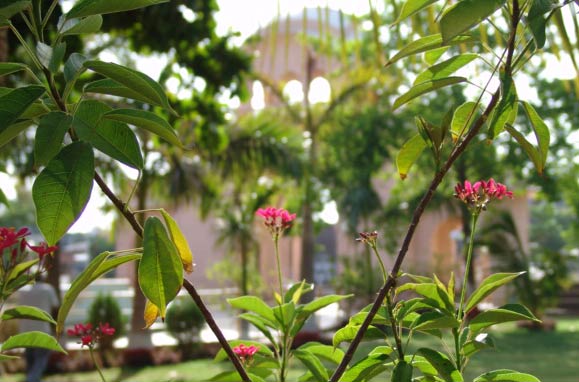 We have the tendency to take Krishna’s creation for granted. For example, when we’re hungry we might pick a fruit from a tree and just eat it without a second thought. I got to thinking about how many factories it takes to make one of man’s greatest inventions: the computer sitting on my desk. To put it into perspective, let’s say I had to build a computer from scratch. At first I thought I’d need perhaps five or ten factories, but in the end I discovered that it would take thousands of them. The little components are made in many countries—inks, glass, buttons, switches, speakers, keyboards, wiring, microchips, circuit boards, plastic and metal casings, and so on. We need machinery and equipment to build all those things. Then there are factories that process the raw materials and chemicals used in manufacturing. And we need more factories to build mining equipment, bulldozers, and so on, to get the raw materials. We need to sink oil wells for the plastic and chemicals and the fuel to transport every little piece of equipment tens of thousands of kilometers. We need to build ships, trains, cars, trucks, and airplanes to deliver all the components around the world. We need more factories to build these. We need massive coal, gas, nuclear, or hydroelectric power stations throughout the manufacturing process, and we need them in the end to power the computer. What about the disks, the software, other media and hardware devices? I could go on and on, but I think you get the picture. This may seem a little exaggerated, but it’s true. To get this computer working on my desk, it really took all that effort.

Krishna’s Factory What about Krishna’s creation? We take a lemon seed and plant it in the soil, and from that seed come hundreds of lemons and thousands of lemon seeds, each seed capable of producing another lemon tree. Krishna’s factory. In one area in the same soil I may plant seeds for lemons, apples, pears, oranges, or peaches, and each seed will produce a different fruit. Furthermore, these plants and trees purify the air we breathe; they take in carbon dioxide and produce oxygen—as opposed to man’s computer, which produces tons of pollution. Somehow, mystically, with very little effort, fruit factories take shape from seeds. I say “mystically” because it is impossible for scientists to explain how the seed becomes the tree. If they knew, they would be able to manufacture such seeds. But scientists at the greatest universities or biotech institutes cannot make even a single seed or blade of grass. Lord Krishna creates, and man simply amalgamates the things already created—and not very well, I might add. Because in the end, when you’re hungry you prefer an apple, not a computer. Your survival depends on it. We will still use Krishna’s inconceivably intelligent creations—the air, water, plants, fruits, sunlight—which scientists can never imitate fractionally, what to speak of manufacture. Only a fool will say that the biosphere in all its intelligently organized complexity has come about by accident. It takes much time and effort for us to amalgamate and manipulate creation just to get non-essential things. How then can we continue to take for granted Krishna’s superior intelligence behind the creation?

In regards with the preaching efforts in Iraq

Mahaprabhu’s Victory – Over the Mayavadis at Benares

Food for Life: in Theory and Practice