How The Deity Reciprocates With His Devotee 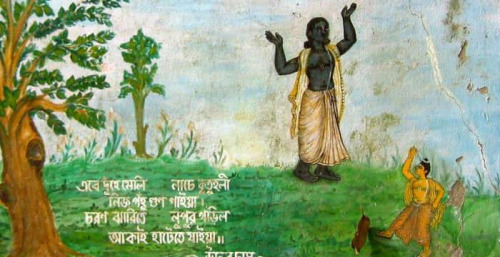 How The Deity Reciprocates With His Devotee.
Raghunandan’s work is to serve Krishna. He has no interest in anything other than serving Krishna. (Chaitanya Charitamrita 2.15.131)
From his early childhood, Raghunandan Thakur would feed the family’s Gopinath Deity laddus.
Uddhava Das has written a song in which this lila is described: Mukunda Das lived in the village of Shrikhanda, where his household Deity was named Gopinath. One day he had to go somewhere for work and he called Raghunandan to do the service. He said, “In this house we worship Krishna, so I want you to be sure to give Him something to eat.” and then he left.
Raghunandan did as his father had ordered and made the offering to the Deity. Raghunandan was just a child and in his simplicity, he said to Gopinath, “Eat! Eat!” Krishna is controlled by love, and so He did as the child told Him and ate everything on the plate without leaving a grain of rice.
When Mukunda Das returned, he asked the boy to bring him the Prasad from the offering he had made. The child answered, “Father, He ate everything and left no remnants.” Mukunda was astonished at his child’s wonderful words that he asked him again on another occasion to make an offering.
This time after he left the house, he returned and hid to watch what his son would do.
Raghunandan joyfully placed a laddu in Krishna’s hand and said in a commanding voice, “Eat! Eat!”. When Krishna had eaten half of the laddu, Raghunandan saw Mukunda Das in the doorway. Mukunda saw that Krishna did not take another bite and that the half-eaten laddu remained in His hand.
This caused him to be filled with love. He embraced his child and, as tears of joy rained from his eyes, spoke to him in a broken voice.
To this day, fortunate people come to Shrikhanda to see the half-eaten laddu in Gopinath’s hand. Raghunandan is not different from Cupid himself, says Uddhava Das with great feeling.
[All the mahantas] felt fascinated to see the Gopinath Deity whom Raghunandan had fed laddus. (Bhakti-ratnakara 9.525)