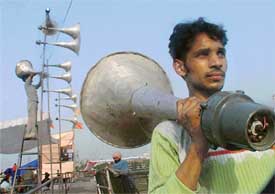 Nothing has changed since 2000 when I was initiated by Dhanurdhara Swami under GBC approval. I have read the case file and was asked to sign a paper saying so, as an ISKCON member in good standing and in faith. This was bona fide contract then. I’ve been in ISKCON since 1993, when the investigations into gurukula abuse began to gain serious momentum.

There has been no new case, no new findings and no formal accusation since. Neither appeal to the final decision or sentence, nor amendment to the existing case has been made. No formal committees have been formed to revisit Maharaja’s case and no further investigations have gone on. Rather, the only thing that has happened since then is that certain people who are clearly unfamiliar with the actual case file have begun to post on message boards, demanding Dhanurdhara Swami leave ISKCON.

This is especially surprising and painful to me because I thought we went through this already in the 1990’s. The arguments are the same, the recommendations are the same, and the charged emotion of the issue has not abated one bit. The only difference is that it’s not the 1990’s; it’s 2006 and instead of closed conference discussions, the debate has moved to the open internet. How could message boards change my life so drastically? Is this mob-justice, so openly in ISKCON?

To those who have posted their opinions, my question to you is this: Have you ever read the case file? I have. This issue has already had extensive judicial treatment. Investigations have been made, findings documented, and verdicts handed down. Each instance was carefully researched and addressed. Sentence has been served…all spanning over a decade! Officially, it’s case closed; at least as far as Maharaja’s involvement is concerned. Now, barely 10 months into his reinstatement, Dhanurdhara Swami has found himself facing a flood of Internet postings prompted by the unfortunate death of Ananda prabhu.

While I can’t begin to comprehend the enormous loss we as a society of devotees feel in this tragedy, I do see the rage it has incited. Can uninformed rage be used in Krsna’s service? While intense emotions are a natural result of grieving, we have let our guard down and allowed them to pervert our sanity. These postings conveniently ignore any of the past history of this case and offer no reference to Maharaja’s efforts toward rectification and healing at all. Instead of inviting us to examine the gains we have made in the fields of child protection and internal justice, the blame has again been laid on Dhanurdhara Swami for the abhorrent conditions of our educational system movement-wide at that time. Again, not much has changed. And just like in the 1990’s, these postings have caused the North American GBC to quietly push him out like an expendable liability. Their silence on this matter is troubling, as I do not believe for one second that any devotee should be left to the tearing hands of mob justice. If sanity does not prevail, then at least let there be civility. That is why we have rules and government in human society, isn’t it? May we please have it in our devotee society?

So now that Maharaja has been forced from behind closed doors to step out, let me pose this question to you all: What are the disciples supposed to do? Give up their guru although nothing has changed and despite a decade of investigations, findings, reports, decisions, court cases, bannings, verdicts, sentences and re-admittances? I did not then, and will not now. Are we supposed to lay down our beads, vows, names and faith? What has changed? Can Maharaja still chant Hare Krsna with the mercy of Lord Caitanya? Can he still impart the gayatri mantra? Are we as disciples no longer considered good followers of the Hare Krsna movement as well? We were authorized by ISKCON when we took initiation, are we still authorized now? Or would you ask us to be summarily kicked out of ISKCON?

I would like to hear the answers to these questions from those who authorized my initiation in the first place. Why do I have to hear it from some faceless poster on a message board? Even in secular society, such claims made by questionable and anonymous individuals over the internet carry little weight.

No, if my godbrothers, godsisters or I were to be asked to leave, I would first like to hear it from someone actually authorized to make that decision, not by someone with an axe to grind. Secondly I would ask those devotees who authorized my initiation to please stand up and defend your decisions, or at least explain your actions if you feel you were in error. Were you acting to protect us in our seva? Were you acting outside your authority in making such concessions or were you given the green light to do so? If not, then what were the repercussions for you from managerial superiors? And finally, if asked to leave, I would simply tell you “No.” Your rubber-stamping of my faith means nothing to me. My guru has not ordered me to leave, so therefore I am staying.

Do we have enough faith in our Hand-of-God legislation that we can offenselessly extend it to our devotee relationships by legislating diksa, forgiveness and healing? If you had that much faith in our judgment, then wouldn’t you honor the decision to allow Maharaja’s return to active preaching in ISKCON?

You didn’t attack him when he was invited back after what the chosen judges considered repentance. Was that court legitimate or was it a sham? If you have a grievance, bring it to that court. That is where the onus lies, not with Maharaja who has paid for his mistakes. Mistakes you never attempt to clarify or define for the uninformed public.

If you believed in the power of legislation, you would not irresponsibly push your own agendas, for fear of inciting a mob riot. Rather, you would acknowledge the fact that we have civilized committees whose duty it is to discern fact from fiction and hand down a verdict, as they have done so in this case nearly 10 years ago!

If you had faith that bhakti translated neatly into legislation, then see how Dhanurdhara Maharaja served his sentence and still remained faithful, humble and repentant. You would see his continued attempts to rectify himself in the society of devotees and bring healing to the issue under the guidance of advanced Vaishnavas.

If you had faith in legislation, then you would turn your frustrations and anger upon those who make it and ask them why they were “lenient” and gave Dhanurdhara Swami “preferential treatment,” if that’s what you choose to believe.

So for all the steps taken already to rectify this horrible situation all around, what has your idea of justice produced? A good and dedicated follower of Srila Prabhupada has been pushed out of the movement, again. If that is indeed justice, then what part of the problem has been solved?

In India, the rule of propaganda is a simple one: Whoever has the loudest speaker gets heard. Volume equals truth. “The truth,” therefore, is whatever information you repeatedly hear the loudest. However, the danger of speaking loudly is that you might not be speaking rightly. But that’s an easy problem to solve: Just check your facts before you speak. Read the case file and see Maharaja’s record for yourself, then decide what you believe based on knowledge, not propaganda from those who seek to discredit the current ISKCON guru structure, or the silence of those who seem unable to explain their actions and decisions.