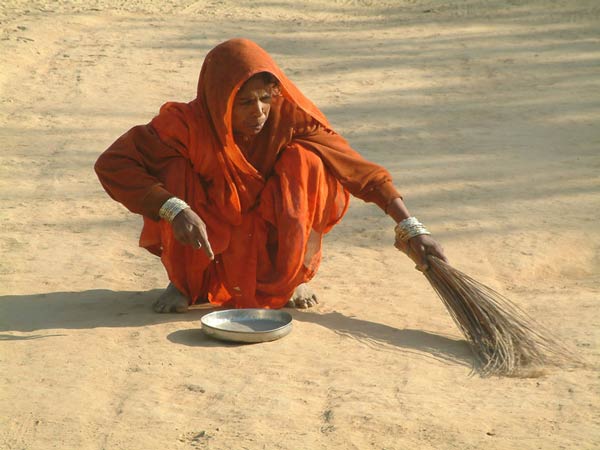 By Karuna Purna dasi
Dear Urmila, Thanks for your article on Vrindavan.

My first shock arriving in Vrindavan after nineteen years of absence was seeing the amount of rubbish, plastic bags and inedible food in the streets that not only pollute Vrindavan, but also constitute a hazard, particularly for cows’ health and ultimately their life, as you very rightly pointed out.

I was also shocked at the physical abuse that one of my riksha driver suffered by a police man at the end of the Parikrama path. I was sitting in the riksha and nothing stopped this so called traffic warden from slapping ruthlessly and for no reason the unfortunate driver. Although we understand that physical abuse may be part of Indian idiosyncrasies, physical violence is nevertheless unacceptable.

I would like to see police including in their duties the night vigilance to prevent butchers from abducting cows and sending them for slaughter. This is happening daily in Vrindavan. It happened just a couple of weeks ago right outside Srila Prabhupada’s Samadhi at Brahma Muhurta time when we, ISKCON devotees, were chanting Hare Krsna, being happy and praying to Srimati Radharani to engage us in Her service. It is my humble opinion, that the service is right there at our doorstep. We just have to accept to do the dirty job of cleaning Vrindavan of rubbish, of cow killers and of materialism. This should be most pleasing to Srila Prabhupada.

Another incident in the New Year was a cow brought to Kurma Rupa das at Care for Cows. That cow was severely injured by a police car just outside the MVT. This happened whilst devotees were peacefully strolling, chanting japa and chatting in the manicured MVT gardens. The ill-fated cow passed away within a couple of hours of her arrival at Care for Cows. Beautiful calves are mercilessly run into by careless drivers and left lying in the streets for weeks. At Care for Cows there are so many examples of these rescued calves, cows and bulls. I would like to see wardens regulating the traffic in a way that pilgrims and cows are able to walk safely in the streets of Vrindavan.

The site of the outside of Krsna Balaram Mandir was worse than anything with traffic and shops. The atmosphere has lost the pious and focused attitude that should prevail in the surrounding of the Lord’s temple. In this year’s Vyasa Puja offering, I wrote to Srila Prabhupada my rememberance of Vrindavan when I joined ISKCON. ‘. . . I still have those snapshots in my mind. Now I was seeing dozens of parakeets in blue and yellow illuminating the skies of Vrndavan.’. This time I saw none. They have all flown away probably due to the pollution. ‘. . .I saw the Yamuna river which was so beautiful and calm’. This time the Yamuna was so far away and terribly polluted. ‘ . . . and the Krsna and Balaram tree was so mystical. When I first saw the Krsna and Balaram tree there were two distinct white and brown beautiful branches. This time round The Krsna and Balaram tree lost one of the branches and looked dry and affected by fumes. ‘. . .The Brijabasis’ eyes were full of a special light. Despite the white clothes they wore, which had turned grey with age, and despite their old physical appearance, still their eyes appeared timeless. It was as though the Brijabasis were from another world, completely unaware and unaffected by my Western concerns’. This time I saw people in the streets from the Vrindavan area and from other parts of India dressed like westerners and with the same concerns that one could have in any western country, rushing in the streets, fighting for a parking space and coming out of their cars complaining and yelling about the traffic that they are participating to create. ‘. . . and I loved drinking glasses of sugar cane juice and dabs outside the temple’. There were those two shops opposite the temple and one nimbu pani shop to the right of the temple. Now it is absolute chaos.

One friend said to me, whilst we were in Parikrama, that Krsna keeps Vrindavan in that ‘messy’ state to drive away materialists. On the contrary, it seems to me that materialists are thriving in Vrindavan as they see it as the suburban area of Delhi where they can buy land still cheaper than in other places.

I must also add that whilst I saw all this material decadence, I also had a great time being in Vrindavan and enjoyed every minute of my stay in the Holy Dhama. I pray to Srimati Radharani that She will allow me entrance again. I would like, however, to see material things improving for the benefit of pilgrims and cows. Urmila, I totally agree with you where you say that despite the legal and political action needed, we could start taking steps to improve dramatically the situation. Rupa Raghunatha das and the team at Food For Life in Vrindavan are trying to address the social problems mainly with regards to inequality in the treatment of female family members, schooling and some environmental issues. Unfortunately the results of his efforts are not very much seen. This is because it is difficult for a handful of devotees to take on such an important task. Teachers could engage in working together with schools to raise awareness and educate children as part of their curricular or extra-curricular activities. Devotees involved in the media world could involve themselves in local, regional and national papers and TV to explain the positive work done in India. Engineers’ help would be priceless to create an environmentally friendly infrastructure, housing and electricity. Just like other religions are proud of commercialising Kosher or Hallal products, we should create and range of milk products declared from cows treated fairly.

Some places in the Western world allowed some of their coast to grow badly but now it is too late and they are sorry whilst other areas were developed strategically. As I am a woman of action, I would like to take this opportunity to appeal for help not just in financial terms but with regards to creating and working practically and effectively in projects on site so that Vrindavan can grow in a more clean, environmentally friendly, and respectful way towards residents and visitors, either cows of pilgrims. Like Srila Prabhupada said, that we should use our Western expertise to help with the situation in India. I think that we should take this as a personal instruction at least in the Holy Dhamas, where our spiritual master’s Samadhis are.

We must not think that the task is too great to be undertaken. I personally grew up in a big city where the culture was throwing rubbish on the floor. One of my close family members launched and advertised bins. In a matter of a few months, the city was transformed and now is one of the cleanest cities in Europe. I had a similar experience in the town of Radlett where I currently live.

I would be very happy to participate in any project helping to improve the Vrindavan area. My particular ‘soft spot’ is cow welfare, so I would welcome any initiative that could improve cows’ life-style, ranging from cleaning Vrindavan of rubbish to cleaning the natural resources where cows and humans can drink safely. However, I would be agreeable to contribute in organising and working in any other project for the welfare of the Holy Dhama. Please address your ideas or contacts through Dandavats.com

Yours in Srila Prabhupada’s service,

Hm. So how you are spending that money?
Get Paid to Promote Solar Power

Salvation from the Material World

Walking on the Moon..?

2 Comments to “ Response to Urmila Devi Dasi on Vrindavana”