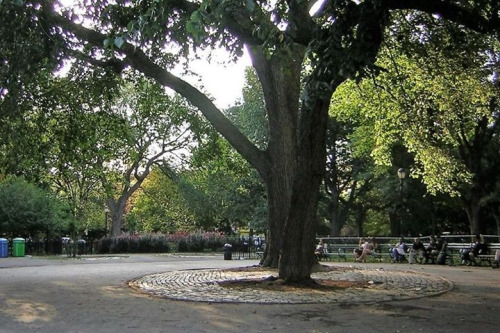 Atlas Obscura: New York, Hare Krishna Tree.
One of the few remaining American elm trees in New York’s Tompkins Square Park was the birthplace of a new religion.
For a hundred years this elegant American elm at the center of Tompkins Square Park was just a tree. Then, in 1966, the Hare Krishna mantra was chanted under its sprawling canopy for the first time, and it became the birthplace of a religion.
To Hare Krishnas this tree is a sacred site. For everyone else it would be easy to stroll by the old elm in Manhattan’s East Village and have no idea it’s a religious landmark. It’s a handsome tree — American elms are quite rare now, known for their wide-stretching canopies — but otherwise inconspicuous. But if you happened to wander by on October 9, 1966, you would have heard the “Hare Krishna" mantra chanted publicly for the first time outside of India, marking the birth of the spiritual movement in the West.
To read the entire article click here: http://goo.gl/XHDefw

No mercy, austerity and cleanliness in this age (video)