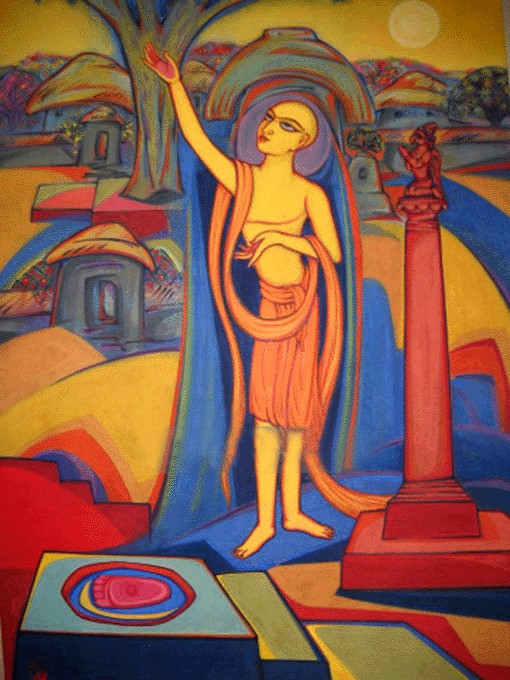 My life took an apical turn when I stumbled across the Hare Krishnas. Being born in India I had some knowledge of “Krishna” but I was like most Indians are – conscious of Krishna but not Krishna Conscious. Being just “conscious of Krishna” didn’t mollify my thirst for happiness. When I was introduced to the programs conducted by the Hare Krishnas near our college campus new hope dawned upon me. What mesmerized me the most in these programs was the chanting of the mystical mantra….

Just by chanting these Names for few times I felt so euphoric, still I can remember vividly the experience. I felt as if albatross of eons was alighted from my back. Initially I was quiet skeptic about the activities of the Hare Krishnas due to my rearing and education. I used to be suspicious why these people are distributing such tasty food for free. I would mull there must be some intoxicant in it to hypnotize me imperceptibly. As I was an engineering student I was trained to see everything with mechanistic vision. Our group of friends who were attending the programs all had same outlook. So we were not ready to accept any kinds of conjury. But the chanting of Hare Krishna mantra indeed put my skeptical mind on a trial. I had some acquisitiveness about mind control, hypnotism, psychology, etc hence I persisted while my other friends dropped out. Due to this chanting some unusual transformation started happening within me. I could tangibly observe that by chanting I could control my senses more easily than before. I could resist undesirable blandishments which seemed invincible before. The taste that hit me while chanting was unearthly experience and thus kept me going on. I was stupefied that how some mantra made up of some simple syllables could produce such abstruse effect. I was chanting continually without getting fatigued! I cogitated there has to be something mystical to the chanting.

I remember in my college days if any film song I loved I would purchase the cassette and hear it continuously with verve. But no song could sustain the flavor for more than a month. It would get clichéd. Then another song would hit the list and I would swear this is it! It will never lose its taste it is simply prodigious! But after a month at the most, the same result. I never could discover a song which could pass the test of taste. Amazingly the simple sounding Holy name devoid of any music passed the test. It could sustaining the effect for more than a month! Till date I am chanting 16 rounds daily for many years but the taste is only increasing ceaselessly. How can the chanting be quotidian? Sometimes people indict that chanting as verbal intoxication. If that is true then why there is no intoxication with chanting “coca cola” or any other sound? Why while chanting “Hare Krishna” only people feel absorption and great joy?

Later I learnt the chanting of Hare Krishna is call for God. God has invested all His potencies in chanting. Just imagine all the potencies of God at one place! We simply cannot envisage. Just like if an ant crawls over a valuable 24 carat diamond it can only think the diamond as simple sugar crystal. Hardly can it discern the complete value of diamond as an expert lapidarian would. Similarly people really don’t understand the value of chanting. They think it as ordinary name just like any other names in use. The Holy sound is completely apart from the prosaic sounds of this world. It is transcendental sound full with God’s energy.

THE MECHANISM OF CHANTING

Lord Kelvin, great scientist says, “If you think strongly enough you will be forced by science to believe in God (supreme consciousness).” The whole approach of science is mechanistic with little scope for consciousness. The only branch of science which believes in consciousness is the Quantum mechanics where the result of an experiment depends on the conscious observer. So first we need to have faith that we are conscious beings and not dead matter. Then we need to understand that only something conscious can give real contentment to conscious beings. In this phenomenal world there are only two conscious objects – the living entity and the Holy Name of God. Hence only chanting can give real satisfaction to the soul. Matter is dead and cannot give real satisfaction. Contact with matter can give us material pleasure which has 3 characteristics F,I,T. which stands for Futile, Insubstantial & Temporary.

For example a boy in the college likes an angelic girl in the same college. If he has to have her he has to venture a lot and mostly he may not get her because he has many competent competitors. So most of the time the pleasure is Futile to achieve. Suppose after sufficient skirmish the boy gets his dream girl and revel with her. He soon realizes the pleasure doesn’t really conciliate him completely. It is not up to his expectations hence it is Insubstantial. Even if we assume that she completely gratifies him according to his expectations, still how long? For some time not for long. The pleasure is Temporary. This applies for every kind of material pleasures. So the pleasures of this world are not really FIT for us. What soul really longs for is easily available, satisfying and eternal pleasure. And that pleasure is available only in chanting the holy Names of God.

The subconscious mind of a human being is much scopious and profound than the conscious mind. There are many deep rooted impressions both positive and negative stored in the subconscious mind. To change these rooted impressions is very challenging nay almost impossible because they are very subtle. Negative impressions like anger, lust, pride, envy, greed, illusion causes lot of anguish to the living entity. Today there is no method to measure them what to speak of evicting them. There are techniques like hypnotism which claim to expel these vices from the mind but it is just like trimming the grass in the lawn. It grows back again after some time. Chanting has the power to purge these negative impressions from the subconscious mind completely because the chanting is subtler than these impurities of the mind!

1) Purification:- Just like a powerful detergent cleanses from roots the very stringent dirt in the clothes chanting eliminates the vices from the consciousness and purifies it. Chanting is not only antiseptic but also prophylactic in nature.

2) Satisfaction:- Chanting helps one to easily rise above the lower modes of passion and ignorance. One becomes situated in mode of goodness where one doesn’t hanker or lament for worldly things, one becomes completely satisfied. Just like a hungry person who has fully relished delicious food becomes satisfied and doesn’t hanker for anything.

3) Liberation:- Manas trayate iti Mantra. Mantra means sound which can free the mind from material bondage. When a rocket is launched at escape velocity of 11.2 KM/sec from earth the rocket can escape the gravitational pull of earth and float in space. Similarly chanting helps us from escaping the pull of material entanglements of this world and progress towards spiritual world.

4) Absorption:- When a jaundice patient is afflicted the sugar cane juice appears bitter but the same juice is medicine for the patient. Gradually as he is tasting the juice he gets cured and starts tasting its sweetness. Similarly now we may not be able to taste the sweetness of chanting but as we go on chanting it tastes the sweetest of all sweets. At advanced stage one gets fully absorbed in chanting the Holy names of God with deep feelings and thus one is assuaged from absorption in matter.

5) Devotion:- This is the main product of chanting – love for God or devotion for God. Other products mentioned above are sheer by-products. Soul has a nature to love and be loved. Love for any person in this world is frustrating but love for God is very endearing. Just like a child when tickled will surely laugh but may not be happy. But when he is in lap of mother he may not laugh but is very happy and satisfied because he is experiencing the deep love of mother. Love of this world tantalizes the senses but love of God satisfies to the soul.

1. In vedic text there is example of Mrigari, the hunter who was a very pernicious as he used to take pleasure in half killing the animals. When the great sage Narada saw this he advised the hunter to stop the violence otherwise the result would be very horrid as every action has equal and opposite reaction. When Mrigari heard about his future he came to his senses and broke the bow. Narada told him to chant Holy Names of God continually. When with great faith the hunter did so he found amazing result! The people around gave sufficient charity enough for him and the family to feed on. After a year when Narada came to visit Mrigari, Mrigari was very much excited to meet his spiritual guide. He went running to meet Narada but on the way when he would see some ants crawling he would stop for them to pass and then run again. This happened several times. He couldn’t imagine hurting the tiny creatures. Previously he would exult killing animals half but now he couldn’t think of harming even the ants.

2. A famous tennis player in USA came in touch with the Hare Krishnas and it brought complete transformation in his life but not in his life style. He remained as a tennis player but with change of consciousness. He started chanting Hare Krishna regularly. The paradigm shift in his life is indicated by his equally famous statement below when in a match he stood at a less strategic position just to save little ants getting crushed under his feet and finally lost the match. “A column of ants began to follow me onto the tennis court. Because I would not step on them, I lost the match. But I won with God.” – Peter Burwash

3. The hippies in USA in 1960s were clamant in search for some pleasure which would satisfy them completely. They were jaded with the normal American way of life. They were searching for something different which will give them mystical experience. Unfortunately they were searching it in LSD, sex, alcohol, etc. Their search ended when they came across the chanting of Hare Krishna. They could easily give up all their bad habits and dedicate their lives for God. They found the real happiness in chanting the Holy Names of Lord.

“Hare Kåñëa, Hare Kåñëa, Kåñëa Kåñëa, Hare Hare/ Hare Räma, Hare Räma, Räma Räma, Hare Hare—these sixteen names composed of thirty-two syllables are the only means to counteract the evil effects of Kali-yuga. In all the Vedas it is seen that to cross the ocean of nescience there is no alternative to the chanting of the holy name.”

By chanting people are becoming perfect gentlemen/ gentlewomen. This is what today’s world perilously needs. This is process of real alchemy turning everyone into gentlemen and women. When every one of us takes to this remarkable process the whole world will be a spiritual world, happy place to live. The chanting is sweeter than the elixir of life. Try and experience it. The taste of pudding lies in tasting. One cannot taste the honey from outside the bottle. One has to open the lid, taste and relish it!!!