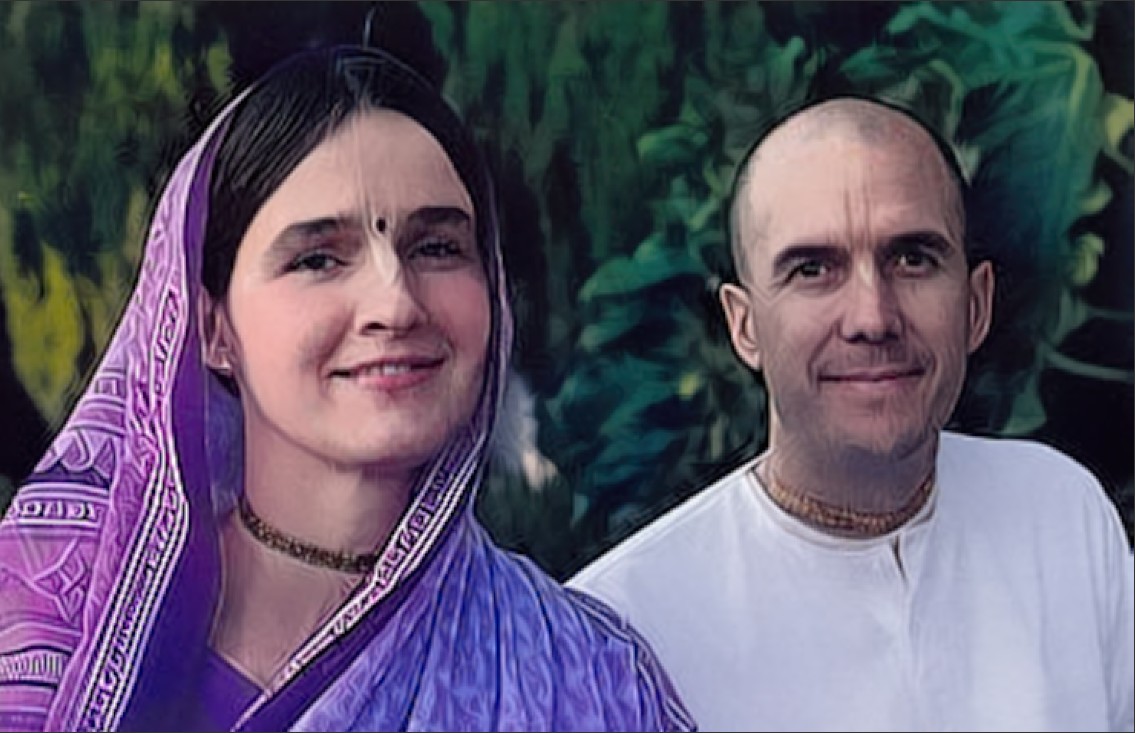 A mother’s extraordinary love for her premature son draws those around her closer to transcendental knowledge of the soul.

In college Carol studied psychology and sociology, preparing for social work. Living in a Catholic convent during her first two years of college, she had hoped her aspiration to serve God and humanity would find its fulfillment there. But feeling that there must be a universal platform on which all people can relate, she felt compelled to search beyond the confines of sectarian religion. In hopes of having exposure to a variety of alternatives, Carol moved to New York City. Though she worked for some time for the United Nations and the Peace Corps, she still felt lacking. She frequented libraries and bookstores, poring over book after book of theology and philosophy. She also dabbled in kriya-yoga and Zen Buddhism and became a vegetarian. Occasionally Carol would see the Hare Krishna devotees in Central Park. She was intrigued by them. And although at first she spoke with the devotees in a challenging spirit, upon reading a Back to Godhead magazine, she felt that here might well be the life she was looking for.

She went to a Sunday feast, spent the night, and never left. In 1972 she was initiated by His Divine Grace A. C. Bhaktivedanta Swami Prabhupada and received the spiritual name Ragatmika-devi dasi. For many years, Ragatmika dedicated herself to distributing her spiritual master’s books. Daily she experienced the satisfaction of offering to countless people a practical solution to all of their problems: knowledge of the soul and service to God. Yet Ragatmika was not merely giving out books of philosophy; she was also imbibing the same philosophy in a very deep and personal way. This became evident as her life unfolded and Lord Krishna used her to preach the beauty of spiritual life in a unique and poignant way. In 1982 Ragatmika married a devotee named Karnapura dasa, and the two of them moved to the ISKCON community in Los Angeles. They planned to conceive a child, and in the spring of 1985, Ragatmika learned that she was pregnant. Ragatmika had the firm conviction that within her womb was a spirit soul entrusted to her by Krishna. Because she knew from the Vedic literature that transcendental sounds could benefit even an unborn child, she would place a speaker against her abdomen and play tapes of Srila Prabhupada chanting.

The pregnancy had been difficult for Ragatmika from the start, and she was only in her fifth month when she was rushed to the hospital. She was in labor. The doctors were able to stop the contractions for some time, but they began again. At 4:40 a.m. on October 25, Ragatmika gave birth to a tiny boy. The infant weighed just one pound and was immediately transported to the neonatal intensive care unit. Karnapura brought an auto-reverse tape recorder and placed two small speakers within his son’s incubator so that the child could always hear Srila Prabhupada chanting. Dr. Dan Polk, in charge at the time, assured the parents that he had instructed the staff that the tape should be considered as much a life-saving instrument as any other device the baby required. Making the incubator into a little temple, Ragatmika decorated it with flower garlands, pictures of Krishna, and—in bold letters—the baby’s name: “Nitai-prana,” a name of Lord Chaitanya meaning “the life air of Lord Nityananda.” Tiny Nitai-prana was smaller than an adult human hand, yet he was a perfectly formed person.

Laksmi-priya, a Godsister and friend of Ragatmika’s, was fascinated to note how even at such a young age the child had the same features and mannerisms as his father. When Laksmi-priya told Nitai-prana what his name was, he began waving his arms and moving his mouth. She told his parents of this, and there was much relief and laughing. Ragatmika began regularly going to the hospital in the morning, staying until 4:00 P.M. She would sit and read to Nitai-prana, even though the doors to his incubator weren’t open. She felt responsible for serving and assisting this spirit soul in his sojourn for as long as Krishna desired that he stay with them. The staff at the hospital marveled at Ragatmika’s concern for her child. Generally the parents of children so premature don’t give the child so much attention. There’s such a little chance of survival. Yet Ragatmika came daily, exhibiting a kind of parental love the hospital staff had never seen before. Ragatmika was always reading or playing tapes, considering the spiritual needs of the child. She also distributed prasadam (food offered to Krishna), books, and garlands to the nurses and doctors. The staff was touched, not only by Ragatmika’s preaching, but by her saintly character.

The head nurse, Sue, was so curious that she arranged to become Nitai-prana’s personal nurse. She was a Chinese-American, and she gave Ragatmika a pendant cut from jade that hung on a red string. In China parents traditionally put this around the neck of their child, so that he might “grow healthy and strong and keep safe and free from fear, wherever life’s travels take him.” Sue had been saving the pendant for her own child, but she had come to feel that it was meant for Nitai-prana. Sue became grateful for her contact with Krishna consciousness, feeling that it was what she had been seeking for years. She took pride and relish in serving Nitai-prana and made sure his tape player constantly played transcendental chants. Ragatmika cut out a special picture of Lord Krishna for Nitai-prana’s incubator. She told the nurses that it should be in Nitai-prana’s view at all times. The nurses, who regularly turned the infant’s little head at different times so that he wouldn’t get bed sores, would also move the picture into his range of vision. On each shift, day and night, there were about twelve nurses and three doctors. They sympathized with Ragatmika and were inspired by her.

In January Nitai-prana developed a lung disease, and the doctors predicted that he wouldn’t make it out of the hospital. Upon first hearing this, Ragatmika could not refrain from crying, thinking that she would never hold her child. But then she soberly considered that if Krishna chose to put Nitai-prana into His own arms rather than hers, what was the loss? Isn’t this what all devotee parents hope for-that their child makes significant progress in his journey toward God? As February passed, Nitai-prana’s lungs began to show improvement. The situation looked hopeful. Then he developed an infection in the upper chamber of his heart. Ragatmika watched as the doctors juggled the alternative treatments for this tiny infant, and she realized that there is no greater pain for a mother than to helplessly witness her child’s suffering. Then she considered how easily and naturally she felt compassion for this infant because he was her child. Yet so many people were suffering all over the world—without the purification of hearing Krishna’s holy name. “Where is my compassion for them?” she thought. Then she remembered Shrila Prabhupada, who exhibited inconceivable compassion, far more intense and spontaneous than what any mother has for her suffering child. As Ragatmika looked upon her child, she prayed for a drop of such compassion.

The doctors decided to perform open heart surgery to remove the blood clot in Nitai-prana’s heart. They had never performed heart surgery on such a tiny heart, and the chances for survival were quite slim. Ragatmika and Karnapura came to the hospital that morning with all the paraphernalia ready for cremation. Karnapura requested that the tape be played during the surgery, so that if the baby passed on, he would hear the chanting of the holy name. As Lord Krishna says in the Bhagavad-gita, “And whoever, at the end of his life, quits his body remembering Me alone at once attains My nature” (Bg. 8.5). One of the nurses got a tiny earphone for the tape recorder and taped the earphone to Nitai-prana’s ear. The operation was a remarkable success. When Ragatmika came to the hospital the next day, she overheard two of the doctors joking, “Gee, maybe we should use the Hare Krishna tape for this one too. Maybe it will make it a success.” When Nitai-prana was four months old, Ragatmika was able to hold him as she sat in a rocking chair. As she held him, she reflected on how the knowledge Srila Prabhupada had given her was relieving what would have been a depressing situation. Usually when we meet with reverses we blame the creator. But knowledge of the law of karma, the eternal soul, and devotional service had liberated Ragatmika from such a blunder.

Early on the morning of April 9, Ragatmika called the hospital to hear how Nitai-prana was doing, and she heard that he’d had a bad night. She had been planning to go to the hospital at 9:00 A.M., but she decided to go immediately. Ragatmika had never seen Nitai-prana in such a bad condition. His abdomen was so distended that he looked as if he were about to burst. But his face was very peaceful. His eyes were open wide, and he was looking at his mother very deliberately. The doctors were discussing performing another operation on him, while Ragatmika stood a couple of feet behind them quietly chanting. Suddenly the heart monitor dropped dramatically. One of the doctors turned to Sue, the head nurse, and said, “I think you’d better take the mother out and tell her—he won’t live much longer.” But Sue disregarded the doctor’s direction and motioned for- Ragatmika to come over to the bed. “Nitai-prana is leaving his body now,” Sue said. Realizing the urgency, Ragatmika immediately went to Nitai-prana’s side. Her voice was so choked that she became afraid that her chanting would not be clear enough for Nitai-prana to hear.

As she looked intently at Nitai-prana, she pleaded with the doctors and nurses around her, “Please help me chant ‘Hare Krishna’ for him. Please help me chant ‘Hare Krishna’ for him.” Sue and another nurse immediately began to chant. As soon as Ragatmika heard the chanting, she was filled with relief. She could understand that the soul’s departure would be a success. Within five minutes the monitor showed no heartbeat. Sue picked up the body of the infant and placed it in Ragatmika’s arms. Ragatmika didn’t know the formal prayers for a soul departing the body, but she began to speak to her departed child very clearly: “Don’t be diverted by this mother-and-son relationship. Take shelter of Krishna’s lotus feet, which are our only real shelter. Go to Krishna now.”

The doctors and nurses were stunned. Never had they witnessed a baby dying in the presence of its parents without the parents sobbing. Ragatmika’s obvious deep love and concern and her serenity impressed everyone present. Three days after Nitai-prana left his body there was a feast at the temple in his honor. Immediately after the feast Ragatmika took some of the various dishes to her friends at the hospital, who enjoyed the sumptuous feast. She thanked the hospital staff for their endeavors and service. Many of them shed tears. A devotee lives to relieve the suffering of others by enlightening them about the eternal nature of the soul. This enlightenment brings more than philosophical satisfaction; it relieves the bewildered soul of the agony of material existence. As Ragatmika passed through a difficult test in an exemplary, Krishna conscious way, she brought everyone in contact with her closer to Krishna. This is the glory of the Lord’s devotee.

One Response to “Go to Krishna Now”