Day Three and Four of the G.B.C. Meetings 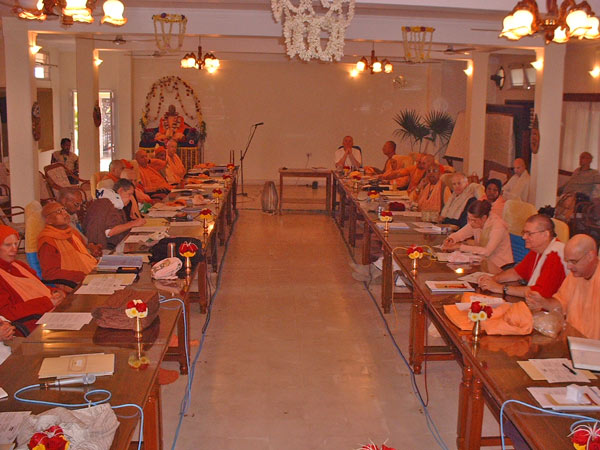 The main agenda item for the next three days is planning ISKCON’s future. If you have a vague idea of what strategic planning is, you will better understand it after reading this report. At the morning session today, the GBC discussed strategic planning for two and a half hours. Gopala Bhatta Prabhu enthusiastically facilitated the discussion and helped the GBC members open their hearts and focus on the issues.

For more details, you can read the following summary, distilled from my notes on the GBC discussion. (Laxmimoni Prabhu and Acintya Rupa Prabhu helped prepare this summary.)

Summary of the GBC Discussion on Strategic Planning

While tactics achieve immediate goals on a small scale, strategies achieve long- range plans on a large scale. Strategic planning means defining initiatives, exercising the future part of the mind, and clarifying concepts of the future. Nations, corporations and most successful organizations have a stated plan. We do not, and that puts us in the minority.

Srila Prabhupada planned strategically by advocating the systematic propagation of spiritual knowledge. His strategy included books, devotees, temples, and establishing ISKCON’s reputation. He wanted us to be accepted as brahmanas and take leadership in offering spiritual guidance to the world.

While planning for the 1996 Centennial, one goal was to make the ISKCON “body” healthy. We scanned the institution and identified many levels to work on and developed action points. The Centennial was a great success, but most of the long-range plans did not hold (one exception was the Congregational Development Ministry, which is still going strong). Why not? Why did we run out of steam? We need to revive the long-range strategies.

Some reasons: Key players got sidetracked. And when gurus did not maintain their spiritual standing, faith in the leadership and its ability to sustain a worldwide movement declined. Energy was dissipated by this crisis and other major crises later.

Another reason: The regular changing of the GBC Executive Committee members has hampered carrying initiatives forward. During the constant changes of the GBC chairman, the Centennial’s long-term plans and, later, the GBC “ksetra” committees were overlooked or ignored. We need continuity. We need an Executive Committee that has a mandate, a memory, and keeps the vision. To this end, GBC members now serve on the Executive Committee for three years.

A significant duty of the GBC is intangible: creating and enlarging the faith of the members in the movement. Traveling and preaching is a significant aspect of keeping ISKCON strong. Some GBCs may serve best by focusing on local projects; others may be more inclined to act as world-visionaries.

Having a GBC with a global vision is a good idea, but can we do it? The GBCs are often immersed in local or regional situations. Do the members have the capacity to do both? Some GBCs are more brahminically minded, others have health problems, and still others have significant responsibility for taking care of devotees. So, driving the “I” (the “international”) in ISKCON, is a problem for them. We might need a tier of “international-only” managers. Or can the Executive Committee sufficiently fulfill this role if it is provided an effective staff and the necessary resources?

The GBC needs an expanded, permanent staff and offices. There is much duplication of effort because of a lack of communication between our worldwide units. Many companies have a department looking for, importing and communicating the “best practices” of its organization. As examples of this, we have sent devotees to study what the Chowpatty temple does, and the Dandavats Web site highlights some best practices in ISKCON.

Gopala Bhatta Prabhu concluded the discussion by saying that in Italy the GBC outlined six core initiatives, or strategic plans, to work on, and representatives of three committees will offer reports of the progress to date during the afternoon sessions today. More detailed work in GBC subcommittees on all six of these initiatives is scheduled for tomorrow and the next day.

At noon the GBC members had a one-hour recess and took part in an inspiring vyasa-puja celebration for Srila Bhaktisiddhanta Sarasvati Thakura in the Panca-tattva temple room.

The GBC members reconvened at one p.m., and Sesa Prabhu gave a report on writing a constitution. This was one of six areas identified in Italy as important to the future of the GBC and ISKCON. So far, it has taken us many years to draft a constitution, he said; previous efforts were made the early nineties and again in 2003 and 2004.

Sesa Prabhu described the current research and the plans to move forward. He will distribute a document outlining the work in progress, which the GBC members can read before they give their consent to the direction he is proposing.

The questions and answers had to do with making the constitution both acceptable and relevant to ISKCON devotees. Everything ISKCON does should be traceable to the constitution, he said. One member said that job descriptions must be included. Sesa Prabhu replied that a second document, to accompany the constitution, will describe ISKCON’s structural authority yet also reflect the changeable nature of an organization and how operations are flexible. A comprehensive working draft of both documents could be presented no sooner than a year from now, he said.

Further questions were raised about the document’s length and content and whether to call it a constitution (which sounds secular) or “canon laws” (the name of the Catholic Church’s constitution). Ravindra Swarupa Prabhu asked whether it will use the modern industrial language of “rights” or the more traditional language of “duties and responsibilities.”

When the meeting ended, the GBC members took lunch. I saw a small group of ladies rolling capatis on the roof of Sri Sri Radha-Madhava’s temple room, next to the Lotus building. Another lady stands in front of a griddle and cooks them and then puts them on a bed of hot gray charcoals, where they puff up. When the prasadam servers need more capatis, they lower a bucket on a rope from the second-floor veranda of the Lotus building, where everyone is eating, and a lady puts the hot capatis into it.

Ravindra Svarupa dasa Prabhu read a paper on Srila Prabhupada’s unique position. This was the fruit of a subcommittee’s discussions in Italy. Hridayananda das Goswami and others commented and asked questions.

Ravindra Svarupa dasa Prabhu said during the discussion that as ISKCON’s founder-acarya, Srila Prabhupada is unique among his predecessors for us. He defended a phrase describing Srila Prabhupada as “the soul of ISKCON” because it says something that is hard to say in other language. It does not go off into heresy, he said. Prabhupada should be all-pervading within ISKCON like the indwelling Supersoul. The Franciscans embody St. Francis’s spirit; the Jesuits have the unique flavor of their founder, Ignatius of Loyola. So we have that with Srila Prabhupada and have to preserve it.

Madhu Sevita Prabhu said that some people say the GBC as unnecessary and that ISKCON will expand without it. Hridayananda das Goswami said that the council of sages at Naimasaranya also had a plan to save the world, and in that sense the GBC and ISKCON are not unique in our tradition. Ravindra Swarupa Prabhu mentioned that Srila Prabhupada claimed to be unique among his godbrothers in understanding the need for a GBC.

Sivarama Swami presented an overview: Parallel to the original authority structure that Srila Prabhupada set up, others arose that detracted from the original. The biggest parallel structure is that of the gurus. Their authority has eroded ISKCON’s authority structure, from the temple president on down. The gurus can work in harmony with the society, but even in this cooperative position, without ill motivation, they affect the authority structure. How? By giving instruction or by working out of harmony with local managers; independent financial bases are another major issue. This has caused tension, but some devotees have become apathetic about it and accepted the situation.

Sivarama Swami discussed how to proceed. He already has obtained feedback from many GBCs. A third of those responding were in support of his committee’s ideas for dealing with the issue, and another third were somewhat sympathetic, while one third disagreed with his perspective. He could put this feedback together, with the committee’s own ideas, with the intention of receiving more feedback and discussing it again at the next meeting in June.

Hridayananda das Goswami suggested surveying gurus who are not managers. Prabhavisnu Swami suggested that deputies and the sastric advisory committee also give feedback. Badrinarayana Prabhu said that many administrators want to get this sorted out. Madhu Sevita said that finding a synergy among ISKCON’s components is the aim. Sivarama Swami said that there are a variety of options in terms of legislation. It has to be resolved before a constitution can be written, Sesa Prabhu said. Anuttama dasa Prabhu said that the current set-up could lead to fragmentation of Srila Prabhupada’s society within a generation or two. There was a strong consensus that everyone needs to cooperate on a spiritual level and focus on the pleasure of Srila Prabhuapada.
.

The meeting ended with an announcement that this was the anniversary of the disappearance of Sripada Gaura Govinda Maharaja. The GBC members were invited to attend and speak at an evening function in his honor.

Day Four of the G.B.C. Meetings

The GBC members and some deputies spent the day planning ISKCON’s future.

Divided into six groups, they continued to work on six core initiatives, or strategic plans, originated at the GBC meetings in Italy last autumn:

The subcommittees will report on their progress tomorrow. 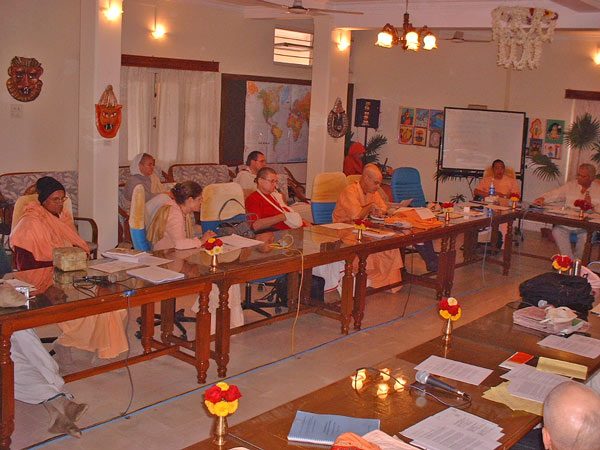 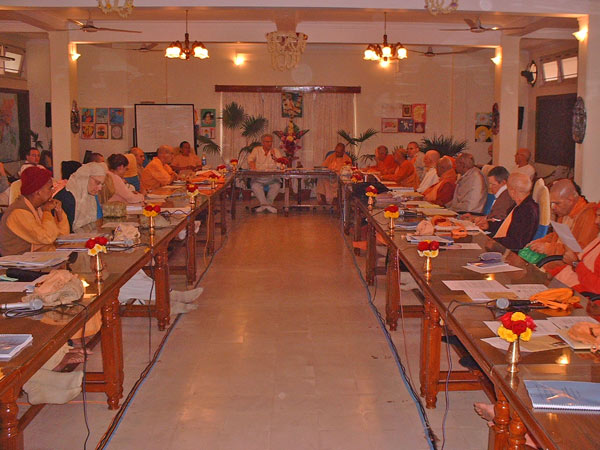 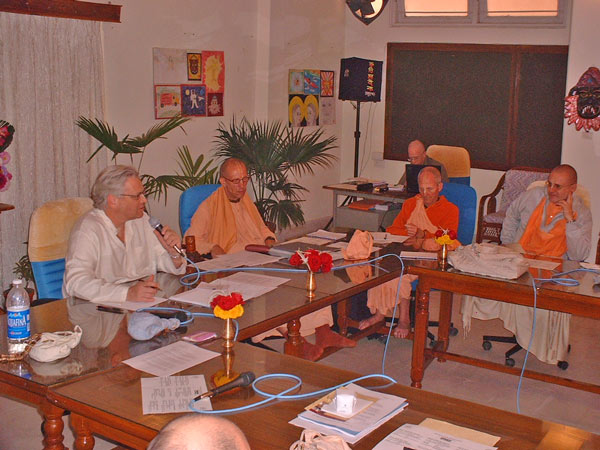 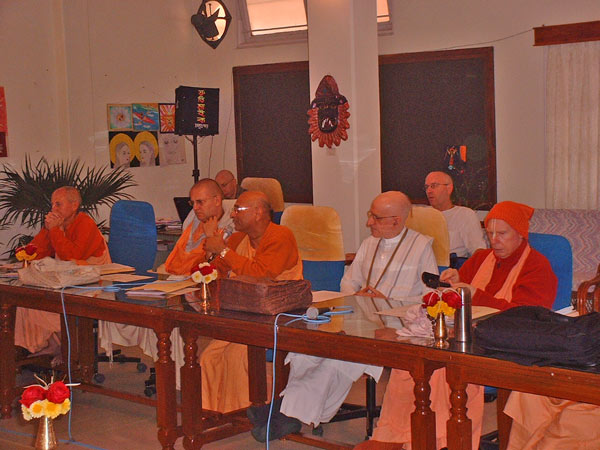 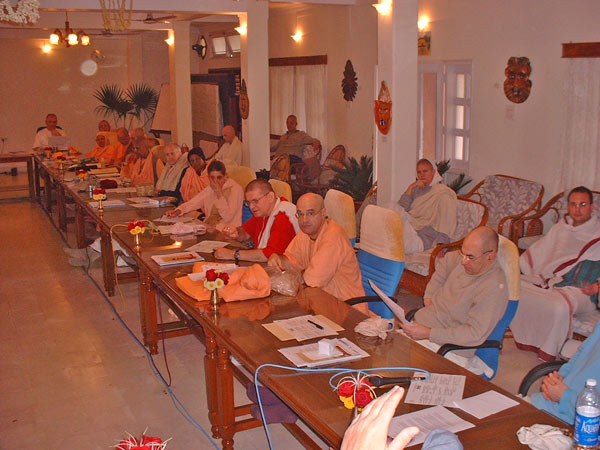 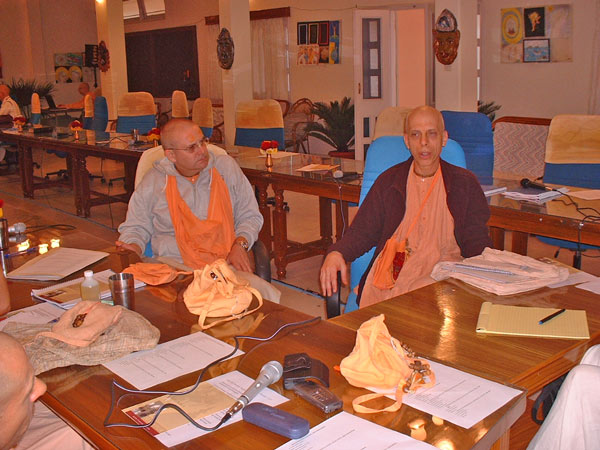 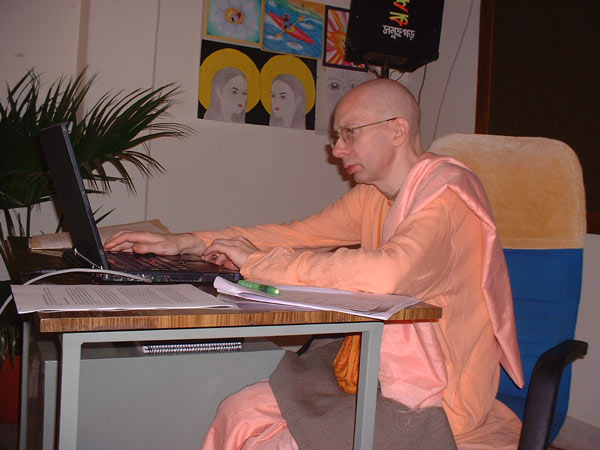 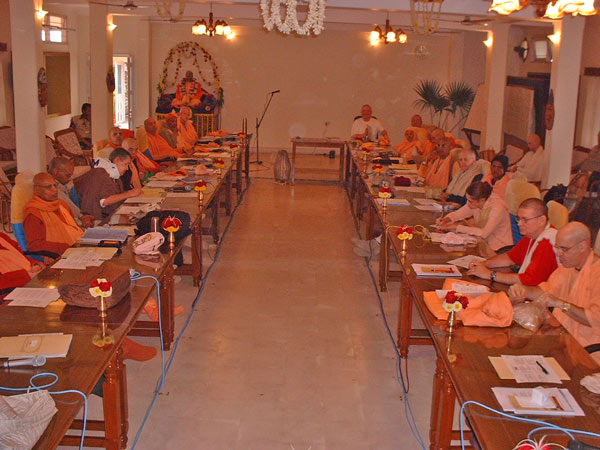 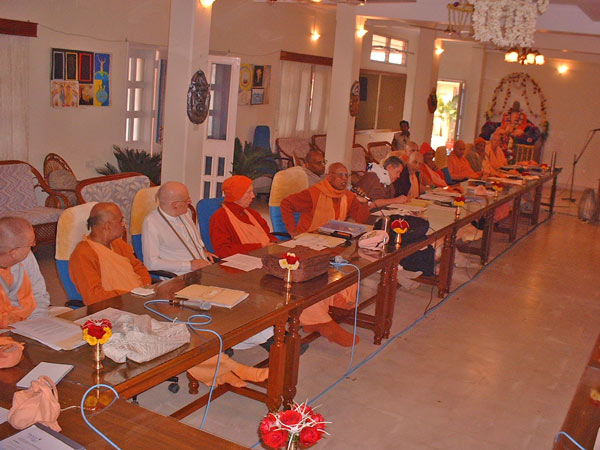 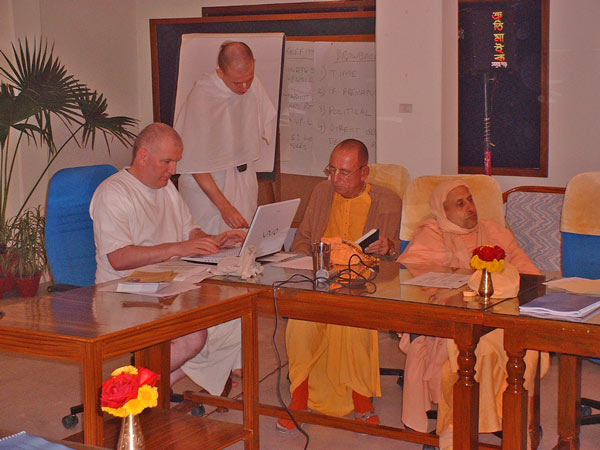 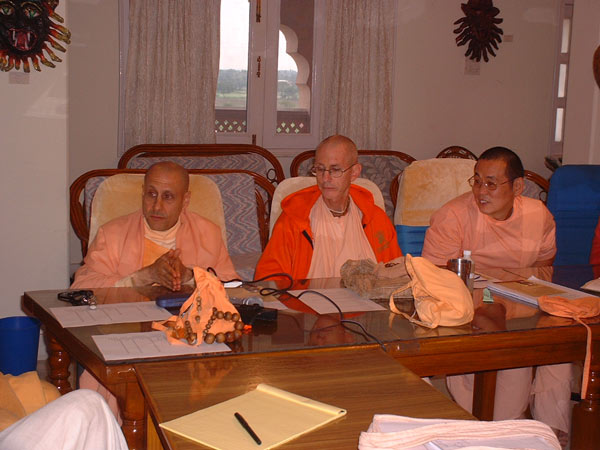 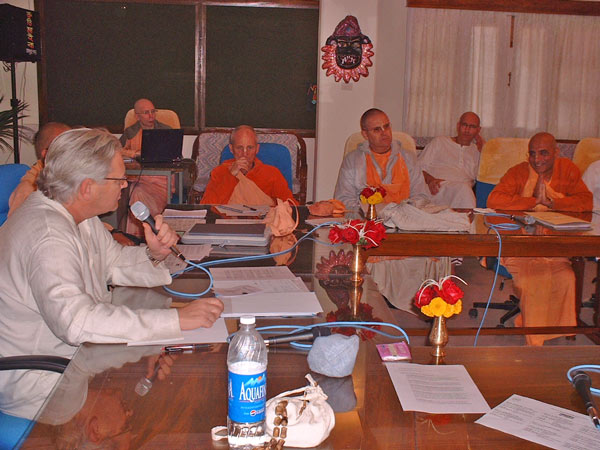 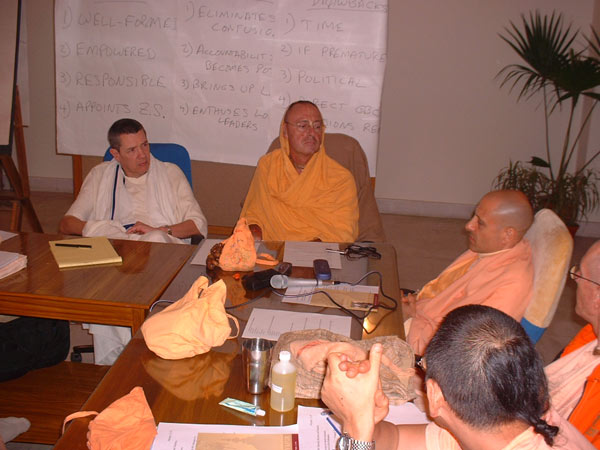 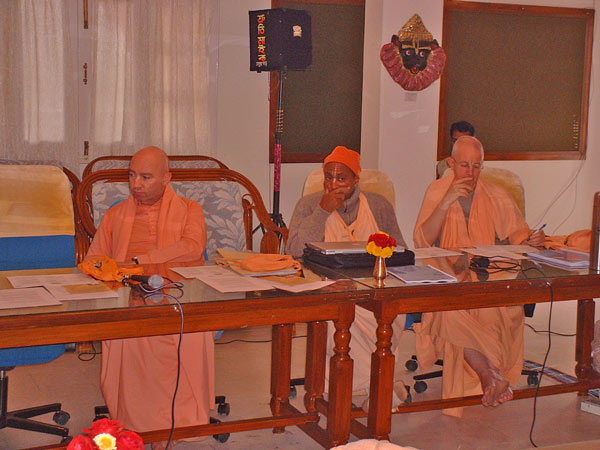 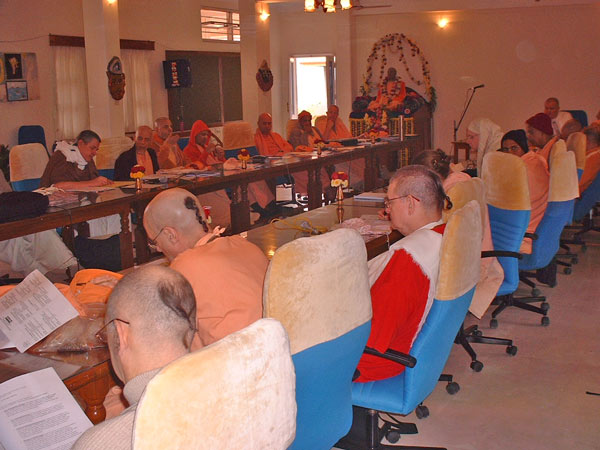 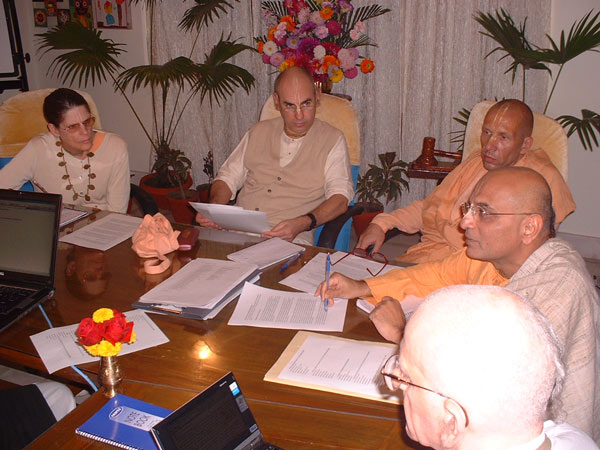 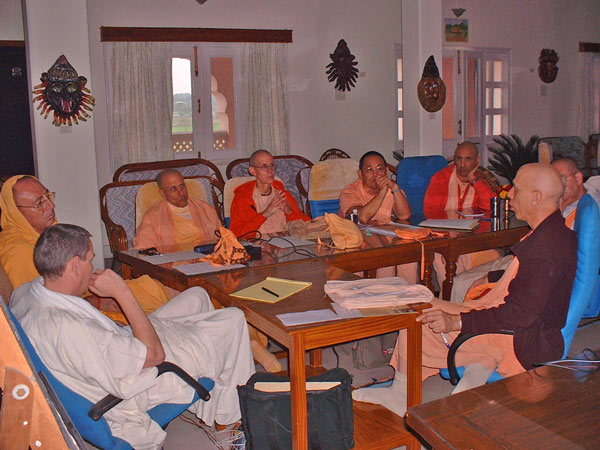 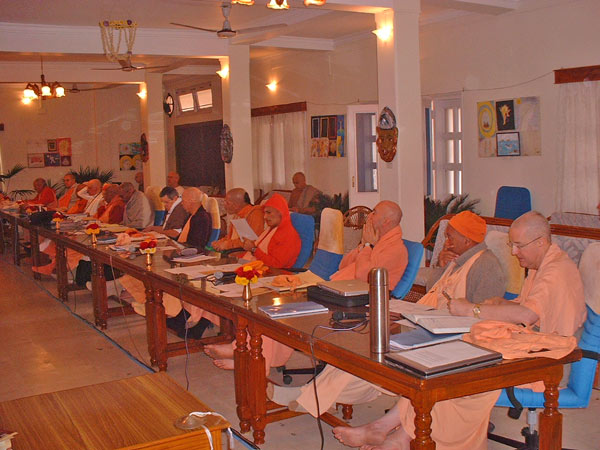 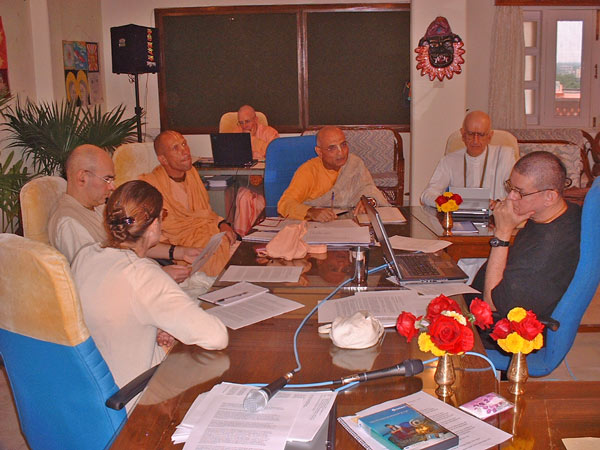 2 Comments to “ Day Three and Four of the G.B.C. Meetings”