Monk Walks To Promote A Simpler Way Of Life. By DEBRA… 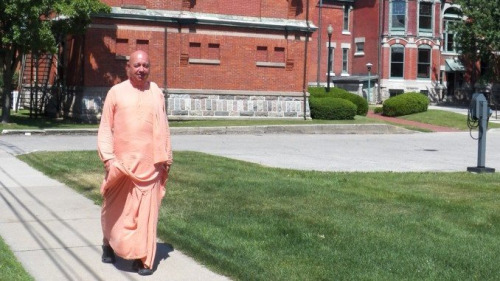 Monk Walks To Promote A Simpler Way Of Life.
By DEBRA HAIGHT
BCR Correspondent
BUCHANAN – He’s on a walk across America, and last Friday Bhaktimarga Swami was in downtown Buchanan on his way west toward Lake Michigan. Clothed in his orange robes, Swami made his way through town as well as west along Elm Valley Rd.
Swami is in the middle of a three-year trek across the country. He began his walk last spring and walked through the fall.
Swami has been walking for nearly a month this year, starting out from Pennsylvania in mid-May, and he’s hoping to link up with the historic Lincoln Road so he can end this year’s walk in Nebraska in August. He plans to resume his walk next spring in hopes of reaching San Francisco next summer or fall.
He was in Southwest Michigan last weekend almost by chance as he searched for quieter roads after spending a week or so in northern Indiana with stops in Bristol and South Bend, including travels through Amish country and a stop at the University of Notre Dame.
While he has many reasons for walking, he said his main message is to urge people to get back to the basics.
“I’m walking for America,” he said Saturday. “Let’s get back to basics and more simple ways. People need to slow down and return to the good old values of morality, family and community. We’ve gone off track.”
He sees walking as a good way to reconnect with what’s most important, whether that is one’s inner faith, physical body, other people or the world around us.
“When you’re walking, you can’t help but go back in time,” he said. “The simple act of walking helps people have time to be meditative and take a little downtime for themselves.”
Swami said it’s often the simple things that are most memorable to him from his months and years of walking, things like berries and other wild fruit and seeing farmland like where he grew up in southern Ontario.
There are also other things that he sees along the highways and byways that most people don’t see as they drive by.
“The road kill I see is astronomical,” he said. “When you’re in a car, you can’t help but be insensitive. I’m not a great supporter of automobiles. I love horses and buggies.”
His schedule has him walking around 20 miles every day, starting at around 4:30 a.m. and ending around noon.
“God made our bodies to walk,” he said.
He and his two companions do take time to visit sites of interest along the way, stopping, for example, last week to visit the basilica at the University of Notre Dame.
He’s not one to turn entirely away from all technology. While the purpose of this trek is to walk across America, he and his two companions also drive as they did on Friday evening to Toledo where he had a speaking engagement. They also had plans to go into Chicago for another speech over the weekend.
“We do make use of modern technology. We use it with purpose to promote a simpler lifestyle,” he said. “I tell people to use it but not let it consume their lives … Gandhi spoke of the value of simple living and high thinking.”
When he’s not walking, he’s pursuing his other passion which is writing and producing morality theater plays that retell traditional Indian epic stories to audiences across the globe.
Swami is no stranger to long distance walks. He has completed four cross-country treks across his native Canada since 1996 and has also walked across the countries of Ireland, Israel, Fiji Islands, Trinidad and Guyana.
Born John Peter Vis, he converted to Hinduism and became a Hare Krishna disciple in the early 1970s when he was in college. He is a disciple of Swami Prabhupada, a teacher who brought Hindu teachings to the west including to George Harrison and other members of the Beatles.
His current trek is in honor of the 50th anniversary of Prabhupada’s arrival in the United States in 1965, and he hopes to be in San Francisco next year for the 50th anniversary of the Summer of Love.
To follow his travels on his blog and postings, go to his website at www.thewalkingmonk.net.