Day Ten of the G.B.C. Meetings 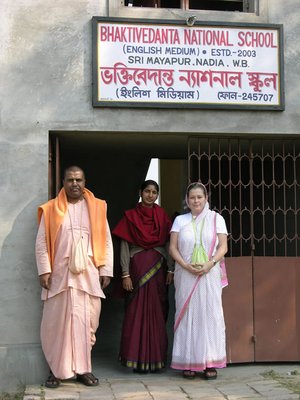 Thirty-five well-behaved, uniformed students (aged 5 to 10) from the student body of 250 students at Bhaktivedanta National School on Bhaktisiddhanta Road came to the GBC Conference Room.

As they entered, these little visitors were immediately invited by the GBC members to sit on their own chairs around the meeting table. Sita got the chairman’s seat and was declared the new chairperson. Praghosa Prabhu proposed that all GBCs retire after the age of eighteen and that kids become the new GBCs. The children passed this resolution unanimously.

The students had made cards for each GBC member, and they each received an Ekadasi cookie and a box of colored pencils from the GBC. One boy recited slokas for everyone’s pleasure at the end. Then the children congregated around the juice bar outside the conference room and enjoyed refreshing drinks before returning to school.

Choosing next year’s Executive Committee will take place tomorrow, but it was discussed today. It is expected that new officers will be chosen who can push forward the GBC’s strategic planning initiatives.

Additional ideas are to put deputies and temple presidents on the EC, and for the senior EC officers to oversee them. This important idea will begin to solidify at the June GBC meeting.

The GBC voted that a World Holy Name Day be annually celebrated at temples worldwide, to coincide with and commemorate Srila Prabhupada’s arrival in the USA. Lokanath Swami, Janananda Prabhu, and Ekalavya Prabhu will be the coordinators.

The GBC discussed (and took a straw vote on) a proposal to lower the percentage of votes by an area council needed to endorse a guru candidate from three-fourths to two-thirds.

The GBC voted to reaffirm the devotees in charge of the ISKCON Ministries.

The GBC body spent the rest of the morning discussing and voting on a resolution concerning the situation of Dhanudhara Swami. This discussion began yesterday in a closed plenary session, but today the GBC deputies were invited to take part. Ravindra Svarupa dasa Prabhu chaired this session, because he was on the subcommittee working on this resolution, as were Hridayananda Das Goswami, Sivarama Swami, Radhanath Swami, Badrinarayan dasa Prabhu, Anuttama dasa Prabhu, and Tamohara Prabhu. The discussion continued a long time, and the GBC dealt decisively with this issue.

The GBC endeavored to balance the aspects of the case and took into account the concerns of all involved parties. The GBC wants to build a consensus. The GBC exercised restraint by not taking sides and by stressing the essential principles to uphold. The resolution clarified ISKCON’s standards of leadership as they affect both society and individuals, took some additional initiative to promote reconciliation, and apologized for its shortcomings. The resolution will be published in due course.

Editorial Comment about the GBC paper titled “The Last Conversation”

A B Cs , X Y Zs and everything in between