Kirtan in America: An American Perspective

We are told in ancient scriptures about a time of reason when the science of reconnecting with God was understood by most people. This was way back before the religious age of blind faith or the present secular age of blind doubt. The ancient culture of that time approached the whole of life and all aspects of existence with the prime objective of achieving pure love of God (bhakti). This non-sectarian science of self-realization was called yoga. The Bhagavad-gita was one of the most famous explanations of this science at that time, and it still is today. The instructions spoken by Krishna to His warrior friend Arjuna were never meant as a philosophy for only monks and renunciates. The teachings offered a variety of paths, and the essence of all these paths, bhakti, could be achieved by everyone.

Here in the West, kirtan was brought to the public’s attention in the mid-sixties—first in New York City’s Thompson Square Park by A.C. Bhaktivedanta Swami and some of his students and soon after by way of pop culture in the Broadway hit, Hair. It was common to hear Hare Krishna Kirtan on the streets of the city back then, a natural fit for the counterculture movement of the time. Unfortunately, the appearance of kirtan in that place and at that time did not help its credibility with mainstream America. Of course this was also a time when mainstream America didn’t give credibility to cigarettes causing cancer, pollution creating global warming, or health food being healthy.

A lot has changed since then. I can go just about anywhere without gagging on second-hand smoke, then on my way home drive to a Safeway in my hybrid and pick up a some organic produce. The attitudes about chanting have also changed. The new American Kirtan movement is alive and growing. If you don’t believe me, just google “kirtan.” I did and got 598,000 hits in .07 seconds. For me this is exciting. It would be even more exciting if the chanters were Personalists.

I started participating in the Hare Krishna Kirtan movement in the early 1970s. The chanting profoundly changed my life and I’ve been an advocate of the benefits of kirtan ever since. As a songwriter born in the U.S. I naturally write about my unique American experience which includes kirtan. For the last three years, my wife, Joie, and I toured all over the U.S. as the musical duo AverageSoul. We took the opportunity to drop in on many of the Hare Krishna Temples along the way. I was sad to find that despite America’s growing interest in kirtan, I saw no wave of new faces coming to chant. The Temple programs were failing to inspire more locals to join in the kirtans. In fact, compared to the 70s and early 80s, attendance was down and the majority of full-time residents were foreigners.

Kirtan gets a very small part of the overall energy and finances given to running a Krishna Temple. Most of the manpower and money goes to orthodox Deity worship. Large temples were purchased or built back in the 70s and 80s with money from armies of street-solicitors. The strategy was “Build it and America will come.” But this idea failed. The problem has been compounded by the fact that these huge properties which house the Deities can’t be maintained without a tithing congregation. Worship of Deities is a very foreign concept for Americans, and except for Indian-born believers, it still has not attracted committed congregations.

Great saints in the devotional tradition have said that Deity worship is a valuable tool for personal spiritual growth. This is an accepted fact. We have seen many a heart won over by beautiful Deities. However, it’s apparent that over the past thirty years in America, Deity worship hasn’t attracted many new American followers.

The following is a list of my personal observations and comments. Of course there are exceptions to these examples on both sides. In looking for answers, I try to remember the words of Srila Bhaktivinode: “A truth-seeker should have a comprehensive, good, generous, candid, impartial, and sympathetic soul; Party spirit is the great enemy of truth.”

These are some definitions I read to keep myself on track:
Bigotry = obstinate devotion to one’s own opinion
Obstinate = adhering to an opinion or course of action despite logical arguments or reasoning
Fanatic = intense blind devotion

I’ve written this to try to make sense of it all for myself or spark an idea in someone else who’s trying to understand it. 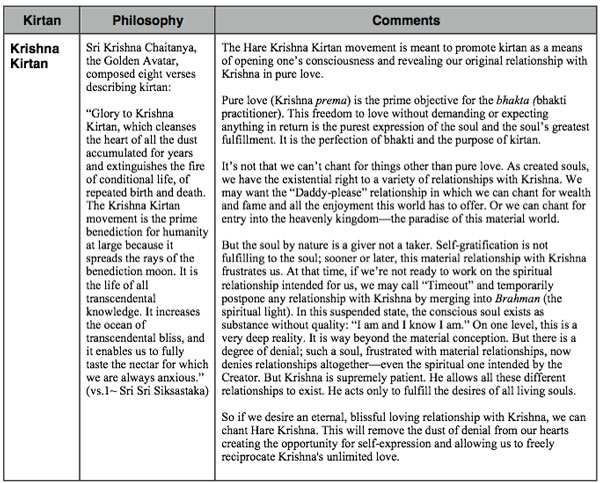 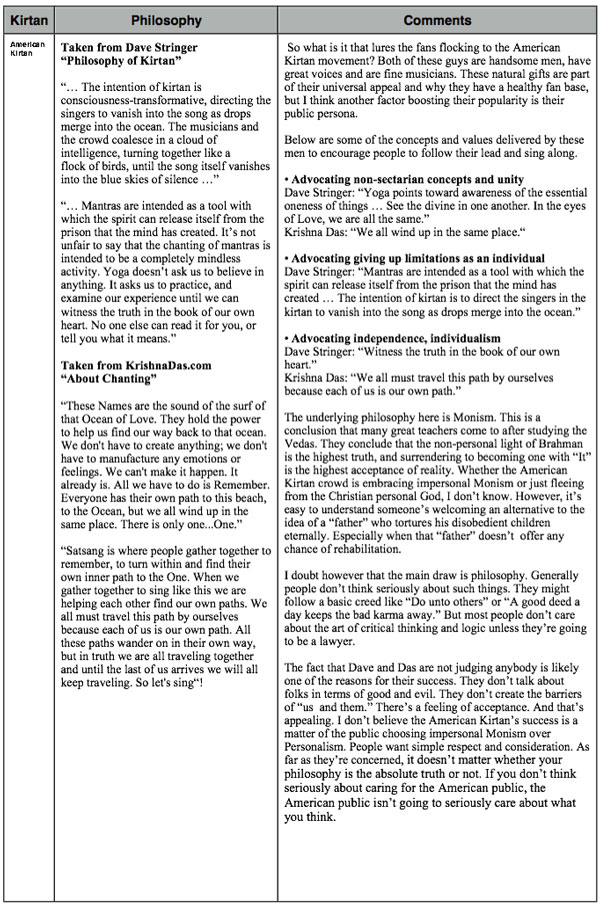 When I step back and look at the Hare Krishna Kirtan movement here in America I see that the heart is missing and the missionary spirit is lost. Sharing the joy of kirtan with Americans involves making a real connection with the public. That connection is made first through recognition of common moral and ethical values and cultural norms. With that foundation in place, building a relationship of mutual respect and trust is possible.

The Kirtan movement in America started off with a handful of young people chanting with A. C. Bhaktivedanta Swami. Although a strict monk, he accepted both men and women as students. Both genders studied with him and lead kirtans. The movement promoted love for God—the kind that included all of God’s children, all creatures, and mother Earth. It had everything that was good about the counterculture movement of the 60s without the drugs, booze, and irresponsible sex. It was nonviolent and nonsectarian. And the teachings presented for westerners a revolutionary concept of Mr. and Mrs. God.

The simplicity of the Hare Krishna Kirtan process, the solid philosophy, the living example of the teacher, and the acceptance one felt by the group created a sense of well-being and hope for the future. All this, along with the ultimate goal of pure love created an optimism that inspired people to drop everything and volunteer heart and soul to create a change for the better in themselves and in the world. That was the spirit of the early Hare Krishna Kirtan movement in America, and whatever it takes to get it back is worth doing.

Hare Krishna Kirtan is a musical journey to self-discovery. It is the life of all transcendental knowledge and a joy that should be experienced by all the folks in town—not just a few.

Thanks for listening
Michael Cassidy

11 Responses to “Kirtan in America: An American Perspective”