The Sense of Kindness 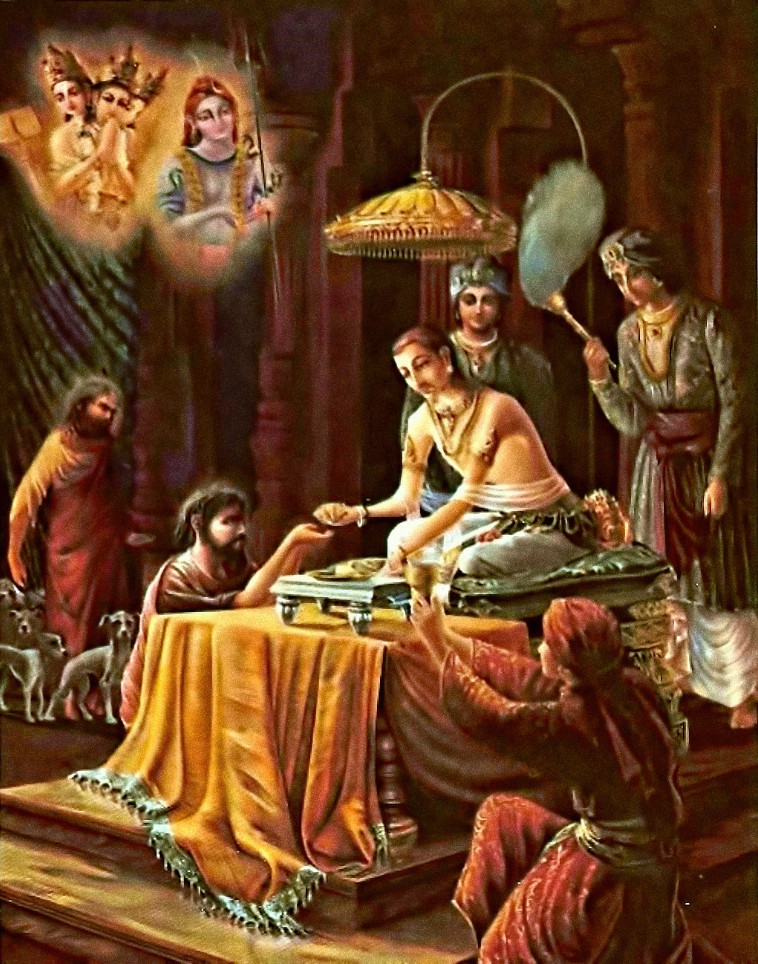 The Vedic king Rantideva showed what
realization is required for true compassion.

WHAT WOULD modern-day social services make of a man who gives away the food meant for his own children to satisfy the hunger of strangers? How would they judge this man, whose family “shivered for want of food,” while he persisted in his unusual dedication to charitable impulses?

The story of this man, King Rantideva, who lived thousands of years ago, is told in the Ninth Canto of the Srimad-Bhagavatam.

King Rantideva would not endeavor for anything. He simply took whatever came to him through the guiding hand of providence. Sound like a handy excuse to avoid gainful employment?

In fact, Rantideva’s apparent irresponsibility did not stem from a lack of concern for his family’s welfare. He himself had no material needs, owing to a firm understanding that all things come by the inscrutable mercy of the Lord. If the Lord wanted to maintain him, then so be it. If not, then the king would accept whatever fate might come.

King Rantideva also understood that because the Supreme Lord is present in the heart of every living entity, all beings deserved the king’s respect and compassion. So when he saw someone in need, he felt no regrets about giving away the food from his own family’s table.

One time, Rantideva was ready to eat after having fasted for forty-eight days. Just as he and his family sat down for an opulent meal, a brahmana arrived. Rantideva was honored to receive the exalted guest and gave the brahmana some of his meal. The brahmana ate the food and left.

Rantideva divided among his family what was left and again prepared to eat. But just as he was to begin, a sudra (laborer) visitor arrived. Now, one might expect that in Vedic society a brahmana would be honored with a meal but a sudra would receive little prestige. But Rantideva did not see the sudra as lesser simply because of the sudra’s social position. Rantideva gave the visitor a share of his food.

After the sudra had left, yet another guest arrived a man surrounded by dogs.

The man called out, “O king, I and my company of dogs are very hungry. Please give us something to eat.”

King Rantideva did indeed give them something to eat all that was left of his meal. He then offered his obeisances to the man and his animals.

By now, all that was left for Rantideva was the drinking water. Just as he moved to drink, a candala (outcaste) appeared, tired and thirsty, and begged the king for some water.

The king did not hesitate. He not only gave the water but said, “I do not pray to the Supreme Personality of Godhead for the eight perfections of mystic yoga, nor for salvation from repeated birth and death. I want only to stay among all the living entities and suffer all distresses on their behalf, so that they may be free from suffering.”

Picturing King Rantideva transplanted in modern society, we can imagine that his family would surely be labeled “dysfunctional,” and that the king himself would be seen as seriously co-dependent. What sort of pleasure can one derive from suffering on behalf of others? After all, Rantideva didn’t create the suffering in their lives. And he was a king why not enjoy the opulence of that position? Obviously, the man lacked a sense of personal boundaries.

The activities of King Rantideva are especially perplexing because in this age to hear such genuine declarations of compassion is rare. We are accustomed to politicians who wrap themselves in compassionate statements until re-elected. We are suspicious of charitable organizations, since so many have been found corrupt. To be as selfless as King Rantideva means to set yourself up as bait for conartists and thieves. Charity is one thing, but if you don’t look out for number one, who’s going to do it for you?

Rantideva knew, however, that the Supreme Lord would look after him. “By offering my water to maintain the life of this poor candala, who is struggling to live, I have been freed from all hunger, thirst, fatigue, trembling of the body, moroseness, distress, lamentation, and illusion.”

King Rantideva, as it turns out, was being tested by demigods like Lord Brahma and Lord Siva, who had come disguised as guests to interrupt the king’s meal. But even when this was revealed to Rantideva, he did not take advantage of the situation by requesting boons from these exalted demigods. He didn’t really care for anything they could offer. Srimad-Bhagavatam goes on to explain that everyone who followed the principles of King Rantideva became a pure devotee of the Lord, equally freed from the effects of material suffering.

Just as a runner trains for a marathon, we can train ourselves toward this enormous generosity of spirit by practicing compassion in our daily lives. True compassion comes by understanding the intimate spiritual connection all living beings share with the Supreme Lord. No one, no matter how fallen he or she might appear externally, is without such a relationship. When one performs kindness with this understanding, the act becomes more than pious duty it becomes a source of the deepest pleasure.

Brief History of the Relation between the Vedic and Western World Views
Where there is a will, there is a way! (Album of photos)