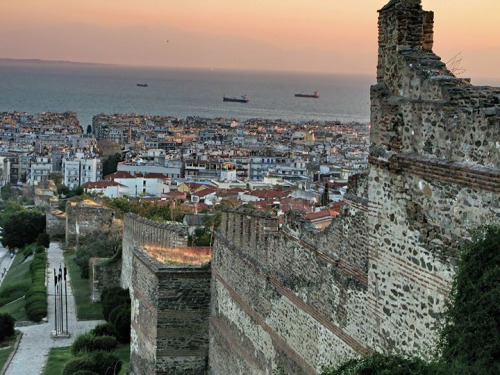 My Greek “odyssey”
An introduction: “Because the Mayavadis are great offenders and atheistic philosophers, the holy name of Krsna does not come from their mouths. I have come here to sell My emotional ecstatic sentiments in this city of Kasi, but I cannot find any customers. If they are not sold, I must take them back home. I have brought a heavy load to sell in this city. To take it back again is a very difficult job; therefore if I get but a fraction of the price, I shall sell it here in this city of Kasi.”
CC Madhya Lila Chapter 17 Texts 143-145
This is what Caitanya Mahaprabhu said to the Maharastran Brahmana after He was told of the inimical attitude of the mayavadi sannyasis towards Him in Vanerasi (Kasi).
I was wondering whether Sriman Mahaprabhu was having the same feeling about the northern Greek city of Thessaloniki, while at the airport the local equivalent of the DEA were checking to see if the holy Salagram silas were containers of narcotics.
My life airs were in a shambles as one salagrama was being flicked and another was in the process of being broken in half. Arguing with Greek officials generally makes things worse, especially considering we were at their mercy and could very easily find ourselves on a flight back to Poland without the Salagrams. So I chose to speak some Greek to them.
There’s only one thing that a Greek loves more than a good Greek salad with local olives, bread, coffee and some baklava in a Café at 2 O’Clock in the morning, and that is finding another Greek where he didn’t expect to find one. We cracked some jokes and without checking our BBT box, our now jovial drug enforcement officials told us to go take a bath in the sea.
After properly worshipping Giriraja and the abused Salagrams in a park by a beach I was ready for the next chapter in Lord Caitanya’s sankirtan adventure. The atheistic philosophers that Mahaprabhu condemned in Kasi were also in Thessaloniki. Due to the “saintly encouragement” of an overbearing Greek Orthodox Church, the youth of Thessaloniki have predominantly become atheistic. So in one sense they are innocent due to a normal youthful reactionary or rebellious spirit. Therefore even though the price of surrender had to be slashed to simple curiosity, it would be far better than just going back home and forgetting them.
“The hour of departure has arrived, and we go our ways—I to die and you to live. Which is the better, only God knows.” [Socrates]
There is a deep love of theistic philosophy in Greece. But it is simply jnana – there is little vijnana. Like everywhere else in Kali Yuga, sublime practice and realization is buried under the lust for base “enjoyments.” Sometimes you just have to leave it up to Srila Prabhupada to do something mystical through his words.
How many times have I knowingly gotten myself into a dead end discussion? It’s a mixture of curiosity, creativity and downright stubbornness on my part. But I keep telling myself that it can bring about fresh insights if undertaken with an experimental attitude.
George in Thessaloniki actually bought a Bhagavad Gita that he was not in the least interested in. Such is the mystic power of the Supreme Lord! Our brief exchange would have ended there and then had not his friend, Stavros, suddenly out of the blue asked me about how to control the senses? An interesting question if you know Greeks.
How do you explain this simple but elusive principle in such a way that someone who is not practicing self-control can understand it. Srila Prabhupada’s books are not on the mundane level of sense gratification and therefore require a special type of patience to comprehend.
So I thought I’d explain that for one to control the senses requires that one has a higher taste. We’re not impersonalists, we can’t give up everything for nothing. We have to shift our senses to something that will elevate and purify us.
In order to avoid the word “God” I tried to use an example of a person addicted to alcohol. “When he ends up in the gutter is he happy? But tomorrow will he give it up just like that? In order to stop being an alcoholic he will have to find something else to engage his senses in, something that will not degrade him. So he has to find a higher taste, right?”
George countered that when you drink alcohol it can help you to think more clearly. At this point I decided to wish him and Stavros a great day and enjoy the book.
Aisvarya das :-)