Srila Prabhupada: “Write a letter to the Coca-Cola company and propose that they change the name of their drink to ‘Enjoy Hare Krishna’ 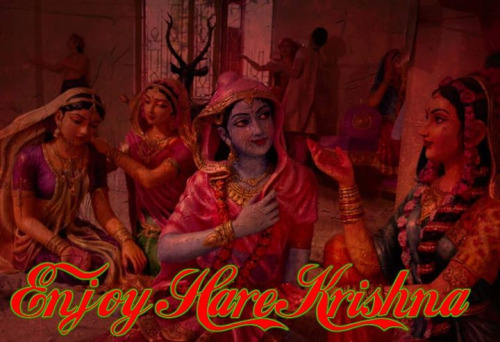 Srila Prabhupada: “Write a letter to the Coca-Cola company and propose that they change the name of their drink to ‘Enjoy Hare Krishna’
Danavir Goswami: Prabhupada spoke to guests at the Sunday night programs. At the end of his lecture he asked if there were any questions, and one old lady cried out, “Why have you come so late?”
She was practically in tears that she had missed the opportunity to take to Krishna consciousness when she was younger. Prabhupada said, “Because you are so late.”
On another occasion, another old person asked the same question, and Prabhupada answered in a different way; He said, “Better late than never.”
Krishna sends the pure devotee when someone’s ready. If you’re not ready then Krishna won’t send.
Two ladies in their fifties asked if they could see Srila Prabhupada. I was the temple president, so I brought them to see him.
They were very respectful but didn’t know what to say. There was silence. Finally one of them said, “Swamiji, we have been meditating for the last twenty years.”
They thought that Prabhupada would be impressed, but he said, “What have you achieved by your meditation?”
The lady thought for a moment and said, “We have learned to become silent.” Prabhupada said, “Stones are silent for millions of years. To become silent is not a very great accomplishment.” That set the mood for that discussion.
There was a young Indian gentleman who had been staying in one of the temples and who said to Srila Prabhupada, “I’ve noticed that some of your disciples nod out in the morning when they are chanting japa. I would like to teach them yoga exercises so they won’t fall asleep.”
Prabhupada politely said, “Yes, yes. Sometimes they fall asleep, but they will learn and improve.”
He sidestepped the question, but the man insisted, “If you just give me your permission, I will teach them yoga.”
Prabhupada said, “No, it’s not required. Bhakti-yoga is—” The man became adamant. He said, “They are deficient. I must teach them.”
Prabhupada became a little upset and said, “They may have some deficiencies, but they are still better than anyone else.”
Prabhupada would not agree to have this man teach yoga in the temple. The man began to argue more, and we asked him to leave.
Pusta Krishna, Nanda Kumar, and I were sitting in the back seat of the car. I was in the middle. Shyamasundar was driving, and Prabhupada was sitting in the right front seat.
There was no talking, and it seemed that Prabhupada was nodding off a little. I thought I would ask a very intelligent question.
I said, “Srila Prabhupada?” He said, “Hmmm.” I said, “How much association did your Guru Maharaj have with Srila Gaurakishor das Babaji?”
There was silence. It became a long silence. The other devotees in the back seat began to silently chastise me for asking a foolish, inappropriate question. They said, “Oh, no! Why have you …?”
Even Shyamasundar turned around to give me a dirty look, although I didn’t think there was anything wrong with the question.
After a silence that appeared to be practically forever, Prabhupada said, “Why do you ask?” Then I realized that it wasn’t an appropriate question.
I said, “I’m sorry, Srila Prabhupada. It was just a question out of curiosity, and it wasn’t important,” and Prabhupada didn’t say anything more.
I learned that, “Don’t try to make small talk. Don’t ask questions that are not appropriate to your level of understanding or that are not important. And don’t ask questions out of curiosity.”
I told Srila Prabhupada that some people claim there is nothing wrong with eating eggs because the eggs aren’t fertilized.
Srila Prabhupada answered that if they allowed the male and female to mix, then there would be fertilization, and the eggs would become chickens. That was the main reason he gave.
We were driving to an engagement in Portland, when we stopped at an intersection. Prabhupada looked around and saw signs that said,“Enjoy Coca-Cola,” “Things Go Better With Coke,” and “Drink Coca-Cola.”
It was a coincidence that there were all these different Coca-Cola signs at this particular intersection.
Prabhupada light-heartedly said, “Write a letter to the Coca-Cola company and propose that they change the name of their drink to ‘Hare Krishna.’
They can keep the same drink, but the signs will say, ‘Enjoy Hare Krishna,’ ‘Things Go Better With Hare Krishna.’”
From that we learned that we should try to promote Krishna consciousness on a broad scale.
Somehow or other we should get the Holy Name to the public, even by using the media. We can use all kinds of methods, whatever we have to use.
—Danavir Goswami
Excerpt from “Memories-Anecdotes of a Modern-Day Saint”
by Siddhanta das
www.prabhupadamemories.com

What If Consciousness Comes First?
Krishna is not an optional source of entertainment - He is the indispensable source of shelter

A visit to Bhaktivedanta Research Center in Kolkata (Album of…