Celebrating 50 years of ISKCON with Historical Ratha Yatra in Vrindavan 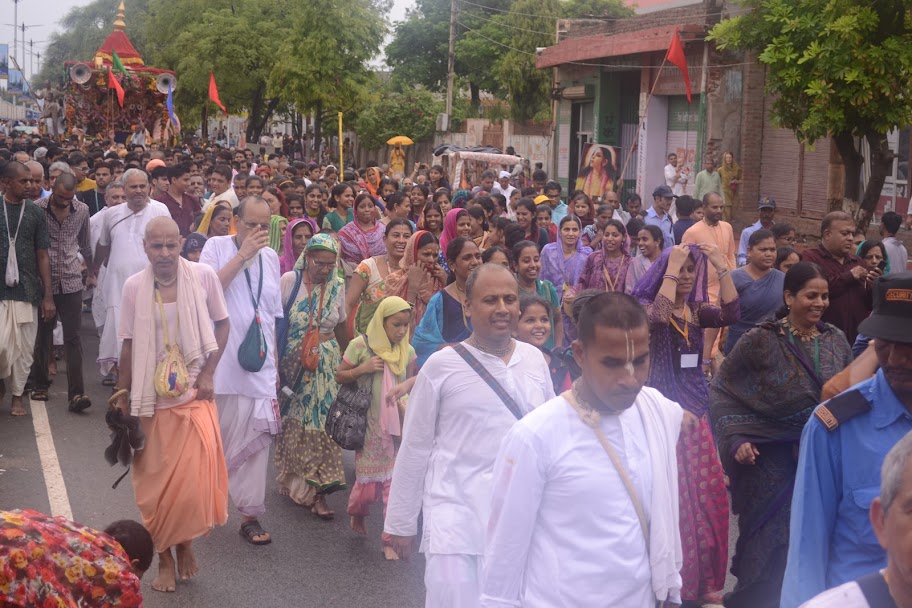 It was torrents of rain continuously from last few day in Vrindavana which became very heavy on the day of the Ratha Yatra.

Lord Jagannatha tested our devotion and determination till the last minute. First a pandal, to be erected in the complex of Ashram Vihar, had to be cancelled due to objection by residents. Then another big party hall, which was booked for the inauguration programme, was cancelled by the owner on the evening of 16th July. Most of the devotees were thinking to cancel the event, but they went ahead and were compelled to arrange the programme in a medium size hall.

And also Sriman Narayan Seth Agrawal owner of G. L. A university of Vrindavan who sponsored morning Prasadam, all hoardings, Banners, and cards for Ratha Yatra

Prominent Sadhus of Vrindavana and donors were accorded warm welcome and were offered pattas (traditional cloth which is a symbol of respect).They were also invited to address the gathering. Many of them delivered short speeches on Lord Jagannatha Ratha and they all glorified ISKCON for the wonderful work they are doing to educate people in devotional life. And they also criticized Sankaracarya who spoke against ISKCON in Ujjain Kumbhamela. All mahantas of four Sampradaya gave stern warning to Sankaracarya to take his words, against ISKCON, back otherwise action will be initiated against him.

Finally all of them performed combined Maha Aarti to Sri Sri Jagannatha , Subhdra and Baladeva.

At 13.30 hours, Sri Sri Jagannatha , Subhdra and Baladeva were seated on the Ratha and Yatra started at 14.30 hours. Lord Jagannatha, being merciful stopped the rains right at that time and thousands and thousands of devotees attended the Ratha Yatra procession and pulled the Ratha. It was looking like a sea of humanity.

On the way of Ratha Yatra, Lord Jagannatha was warmly welcomed in twenty one places by many societies, hotel owners, ashrams etc by offering Aratik and distributing different kinds of drinks and Prasadam

The yatra was being led by devotees holding a big banner and following that was eight feet high Srila Prabhupada’s picture on the four wheeler car followed by team of Shahnai players. It appeared as if Srila Prabhupada is the leader of the whole world and our Ratha procession is following him.

After that were Jhakis followed by four different Kirtan parties. They were performing Big Harinam Kirtan on the Vrindavan Street. Most of the devotees were dancing on the tune of Hare Krishna Mahamantra. Three vehicles distributed Prasadam and all the visitors were honoring and feeling very satisfied and glorifying ISKCON and Srila Prabhupada.

Around 7:30 Pm we started Pandal Pragaram @ Krishna Hall on the big stage. There were cultural programmes like classical dance, and stage play on Lord Jagannatha followed by performances by Namhatta Youth boys and Girls and congregation children and one Brajavasi team. It was very wonderful programs, every one became very very happy. The programme culminated at around 22.00 hrs.

We would like to thanks all the donors, devotees, VIPS, Congregational members, Visitors who helped making ISKCON’s 50th anniversary Ratha Yatra of Vrindavan Dham successful.

And our very special thanks goes to HG Balabhadra Prabhu of ISKCON Delhi who sponsored and prepared Prasadam by his team of devotees the big Bhandara Prasadam @ Krishna Hall. More than 2500 devotees took prasadam.

We are inviting all of you in advance for our upcoming Ratha Yatra festivals in Palwal, Hodel, Hatras and many more places. Our Ratha Yatra organizing team from ISKCON Vrindavan Namhatta, who pioneered this festival in Vrindavana, is very encouraged to organize festival in other places also. We need the blessings of all the Vaishnavas.

We will announce the date of upcoming Ratha Yatra in time.

Yours in the service of the Lord Krishna Balaram!

Russian’s new law could lead to religious crackdown! “The...
A visit to Srila Prabhupada’s apartment on Frederick...

The Contagious Effect of Krsna Consciousness Spreads in Jails Across the US!