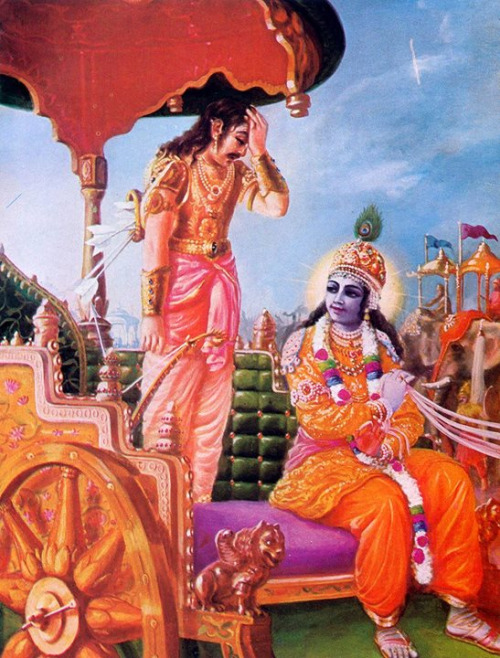 Final call for boarding – My recent sankirtan experience.
I had to travel to Coimbatore India from Secunderabad to meet my parents over the weekend. I had to travel by plane due to last minute decision, but still I packed a hand baggage with my cloths and another carry-on with books.
After finishing the formalities at the airport counter, I was left with about 40 minutes for Hari Nama Sankirtan. I approached a lady explained Bagavad Gita but she was not interested. I moved away looking for other travelers but was headed in the direction wherein the waiting areas were empty. When I traced back the way the same lady helped me by pointing in the direction where more people were waiting. I showed her the Ramayana one more time and showed her all the pictures. She was still not interested but then I quoted the verse from BG (2.40) “Neha …” and explained her why she should keep these books with her all the time. She quickly decided to buy Ramayana.
As I moved away to another area, I approached a person working on his laptop drinking coffee. Quickly he said he already has BG but when I showed him Ramayana, he could not resist any further and decided to buy.
The next 30 odd minutes was a big struggle to distribute even a single book and I heard the announcement for the last and final call for boarding. I decided to give one last attempt and went around the waiting lounge (pretty much the same place where I had tried in vain just few minutes back). I suddenly noticed someone was taking pictures with “some celebrity” (I thought) and just waited for the photo session to complete and approached the persons with Bagavad Gita. First I showed the pocket size Bagavad Gita, explaining the need to propagate this message all over the world, and asked him to donate some money to cover the printing and binding cost. Immediately the man (celebrity) opened his wallet and gave Rs. 1000 and said that he is taking this copy even though he already has another copy with him. All along this time I was hearing the airline staff announcing the final boarding call for myself and another person.
I rushed to the gate and boarded the bus ready to take just the two of us to the plane. The other person (who was late for boarding) entered the bus behind me and I showed him Bagavad Gita. He looked at it and said he will take the book after he gets down from the plane in Coimbatore. Indeed he took the book at Coimbatore airport but he also did not have the change for the book and had only Rs. 1000.00. It was around 9.00 PM and I was struggling to find the change since I only had 650.00 in change and then he asked me what else do you have and readily took the telugu Ramayana for the remainder of the money.
On my return flight back to Hyderabad, the only person who took the Bhagavad Gita said he was an atheist but still he wants to learn from this book in any case.
I have heard many senior devotees sharing their book distribution realizations, that never to leave a stone unturned when it comes to distributing Srila Prabhupada’s books. However this is the first time that I personally experienced and realized the need for me to put all my efforts and take no chances by ignoring people on face value or give up too soon when it comes to distributing books for Guru’s, Srila Prabhupada’s and Lord Krishna’s pleasure. The nectar of Lord Krishna’s, Srila Prabhupada’s and Guru’s reciprocations are inconceivable, so much so, that I realized my 2 hands are not sufficient to hold and receive all that mercy.
Your Humble Servant,
Sridhara Srinivasa das