Books and Prasadam Distribution in Thailand (Album with photos)… 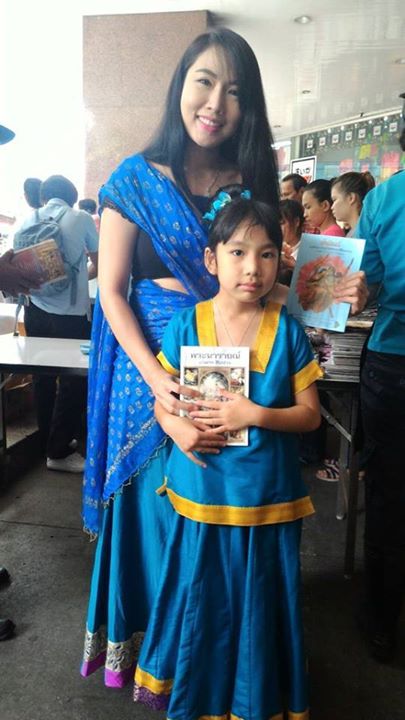 Books and Prasadam Distribution in Thailand (Album with photos)
Siam Devotees help the local people connect to Shyam…
July, 1976-Room Conversation, New Mayapur
Hari-sauri: People in Thailand are quite pious.
Prabhupada: Yes. They are Indian culture. Their original culture is Indian. It is called Siam. (pronounces like Syama) Krsna’s name. And they have got the airplane, Garuda.
Hari-sauri: Yes. Garuda Airlines.
Prabhupada: So they are devotees originally, all Krsna devotees.
Devotee (1): The king is speaking Sanskrit.
Prabhupada: Yes. It was known, it has been changed now. Formerly, it was known as Syam state, Siam. Syam is the name of Krsna. Whole state was named under Krsna. So, and they manufacture very nice idol of Radha-Krsna. They’re accustomed.
Hari-sauri: They have a very strong Buddhist influence there now.
Prabhupada: Huh?
Hari-sauri: Buddhist.
Prabhupada: Later on, they became Buddhist, but originally they were Vaisnava.
Devotee (1): So they will not make some objection if they think we are thinking we have come to preach Hinduism in a Buddhist country?
Prabhupada: It is not… Don’t establish Deity. Talk on philosophy.
Devotee (1): “God is the supreme controller.”
Prabhupada: Yes. We accept Lord Buddha as incarnation of God. Show in our books that we have got all respect for Buddha. We do not disrespect Lord Buddha, neither go against him. Anyway, if we get one house to live and a supporter, a big supporter, then our position will be secure. And if our cause is honest, then nobody can check.
Find them here: https://goo.gl/cMXTm1