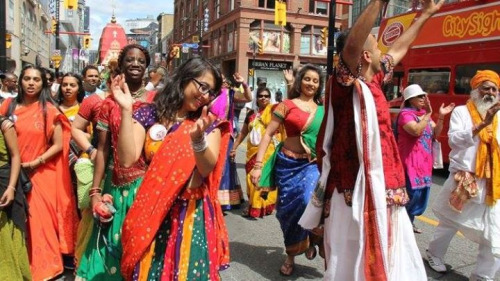 Toronto Rathayatra Inspires Second Gen Leadership.
Madhava Smullen: Growing every year in size and popularity under a second generation team, Toronto Rathayatra has inspired younger devotees to take on more and more leadership in their community, and senior devotees to hand more and more to them.
Seventeen years ago, when he was only eighteen, just one second generation devotee, Kevala Bhakti Das, became part of the Rathayatra organization team. Today, the festival is put on by thirty-two younger devotees from high school kids to thirty-somethings, heading up twenty different departments.
This year’s Rathayatra, Toronto’s 44th annual, was the biggest yet. It began with a ‘pre-festival’ on June 26th, giving the public a taster of what to expect three weeks before the parade.
To read the entire article click here: http://goo.gl/bpJ0Ux

Vrindavan Institute for Higher Education newsletter. The VIHE in…