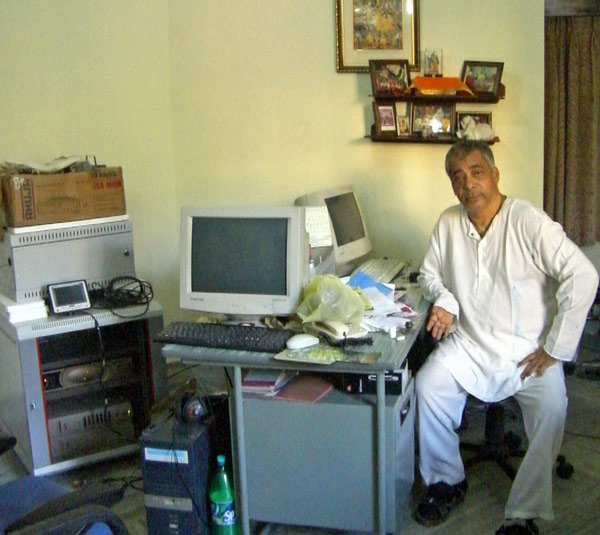 On Gaura Purnima I had the good fortune to meet my old friend Haridas Prabhu at the Radha Rasabihari Mandira in Juhu Mumbai. Haridasa Prabhu was one of the first Indians to join in Bombay. He is very much attached to SRILA PRABHUPADA. After finding a BTG with a picture of His Divine Grace Haridas walked from the far side of Bombay to Juhu to meet Srila Prabhupada. Srila Prabhupada loved him very much and we see many photos where Haridas is sitting attentively near to Srila Prabhupada

He was a dedicated preacher for many years, making many life members. He specialized in preaching to the people of Bollywood. After many years he acted in many movies and learned much about movie making technology. He was being prepared for some big preaching service.

When he returned to the temple for full time service he stated ITVINDIA. He did this on his own with his own money. He never asked for any help. To make a long story short, he now broadcasts on 17 channels between TV and INTERNET. His shows are reaching all over the planet. One series of
365 shows covers the entire BHAGAVAD GITA. The classes are by Devakinandan das (Juhu), Gauranga das (Chowpati) and others. This has been show over and over on STAR TV for 7 years. Soon they will film a series that covers the entire SRIMAD BHAGAVATAM..

While functions are going on in the temple, that is broadcast live. When the temple is closed he plays other shows that he has carefully prepared. The latest feature is that one can tune in on a cell phone and attend the temple programs.

Haridas Prabhu’s mother was for many years a dedicated cook for RADHA MADHAVA in Mayapura. She was fully absorbed in cooking for Their Lordships and distributing the prasada.

Now Haridas is making documentaries of various holy places. One on Dwaraka is finished and others will come soon. Haridas is extremely humble while working 10 hours daily. He told me that he is just trying to pay back the investment that Srila Prabhupada made in him.

[kqf=15]
What happens when a new devotee is met by an opponent who tries to test him?
Srila Prabhupada Spoke to Me in a Dream

One Response to “Haridasa Prabhu ITVI”