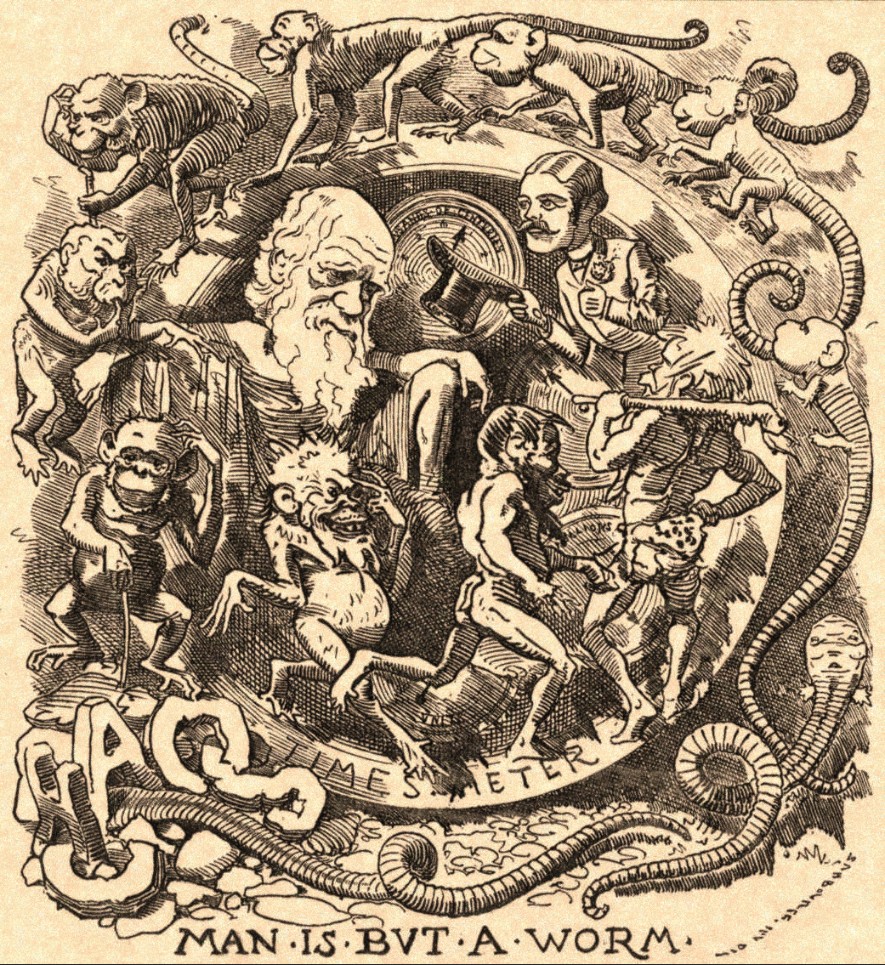 The doctrine Of evolution is difficult to hide from. It is so pervasive in textbooks of science, geography, history, and literature that the reader, numbed by repetition, hardly notices the constant drone.

Our children need help to remain awake to spiritual life amidst this sleepy cloud of propaganda. We need to teach them the truth. And we need to show them, clearly and specifically, how evolutionists are lying.

Does it really matter? Is it important for our children to know the origin of life and the universe? Perhaps they can be clear about spiritual life without bothering to think about Darwin one way or the other.

But can they? In most standard modern versions, evolution links tightly with the outlook that all order, law, and life come about by chance. But spiritual life means connecting with the Supreme Spirit, Krishna, who is a person directing the cosmos and giving the seed of life.

Also inherent in most of today’s evolutionary views is the notion that life is a complicated organization of matter. But spiritual life begins when one understands that the self, the essential living being, is irreducibly spirit, always distinct from matter.

Therefore, we need to teach the truth. The order and law of this world are everywhere. For young children, we give simple analogies. “See the white line in the middle of the street?” We show them. “That means there is a government. I may not see the mayor or the governor or the president, but this line is proof that they exist. In the same way, the cycle of seasons and the intricate design of a plant are proofs of an intelligent creator.”

Materialistic evolutionists scoff at proving God by design. What of injustice and suffering, they ask? Did God design these?

“Yes,” we tell our children, “just as the government—made up of people—has designed the prison and court system.”

The problems posed by the materialists become an indication of God when resolved by explanations of karma and reincarnation.

In such ways, whether informally as opportunities arise or as part of a planned curriculum of science and social studies, we can teach young children to see Krishna in His creation.

We also need to teach the difference between life and matter.

The love of a cat for her kittens, the urge for survival that sends the ant over what to him is a hundred miles for a grain of sugar—these are constant signs that life is other than matter. The inability of a machine, even a computer, to become aware of its own existence tells the child that consciousness does not arise from a complex combination of matter. Rather, just as I, a conscious being, operate a computer, so I operate this body. My computer will never write this article by itself.

Srila Prabhupada’s books brim with evidence for God and the soul. Daily in-depth study of his books will awaken children’s true vision. They will see that behind the veil of maya is the face of the Supreme Lord.

We need to protect our impressionable and vulnerable children from the evolutionists’ propaganda machine. Films, television programs, textbooks, and science museums often conform to evolutionary doctrine unquestioningly. Exposure to these, especially frequent exposure, may draw the blind of darkness over the window of our children’s knowledge.

But how can we combat the evolutionists’ propaganda? When the child matures in the realm of intellectual and reasoning ability, we must systematically attack the unsound premises of evolution while giving evidence for the existence of Krishna and the soul.

Our first argument is that the bodily machine of even the simplest life form cannot arise from a chance combination of matter, any more than an explosion in a printing shop could bring into existence a dictionary or the works of Shakespeare.

Second, even if somehow the external body of a living being could spring forth from random material processes, the body cannot work without the soul. An airplane is built by intelligent people, not by a tornado in a junk yard. But however an airplane is built, it needs a pilot. Otherwise, it can sit on the runway for thousands of years without flying. Despite a machine’s complex technology, it still needs a living being to push the buttons.

In this way, we can explain that the symptoms exhibited by living beings—from the plant to the ant to human beings—indicate the presence of a “driver,” the soul. And as soon as this driver leaves, the body dies and decays.

Evolutionists say that life came originally from matter and that all species have gradually developed from the first life form. Practically speaking, that’s what evolutionists must say. Why? Because they’d never convince us that advanced life forms arose from matter. We’d never believe that giraffes appeared suddenly from a pond. Evolutionists would be a laughing stock if they asserted that each species developed independently in its present form from chance molecular collisions.

Yet how strong is the evidence for gradual evolution?At the chemical level, we can point out that scientists have failed to show how matter could by chance alone pull together even one protein needed for life. Going further down the supposed evolutionary line, we can show our children that crucial evidence for evolution is lacking in the fossil record, that mutations are generally harmful and do not change one species into another, and that intermediate forms of organs would be nonfunctional and therefore hinder rather than enhance the survival of their owner. We can give specific examples from the evolutionists’ bag of so-called proofs and show how they are irrelevant or distorted.

Finally, it’s helpful to expose children to mysteries scientists can’t explain. We can study well-documented instances of psychic ability and out-of-body experiences that support the conclusion that the mind is more than the brain. While we don’t rely on such empirical evidence or put full faith in what is sometimes sensationalism, a carefully chosen study of the most solid evidence can help a child know that many of the inexplicable occurrences described in the Vedas are still happening today.

For most of us, to refute evolutionist propaganda entirely from our own understanding and knowledge would be difficult. So I suggest some books and videos that can help structure an educational program, whether at home or at school. There are certainly many other useful resources, and I would be glad to hear of other suggestions. As Srila Prabhupada told us, “The more we kick out Darwin, the more we advance in spiritual consciousness.”

The following are books and videos I suggest for students at least thirteen years old. (Younger children may be able to grasp at least the basic ideas.) The materials not produced by ISKCON are quite valuable. They may not present a complete view of the soul and God, but they do a good job of dismantling evolution and establishing theism, at least in a general way. Please keep in mind, of course, that they may put forth some minor points with which we disagree.

“Mysteries of the Unexplained,” Reader’s Digest, 1982. Often available through bookstores, it probes into such diverse topics as bizarre coincidence, unusual rain (frogs, nuts), inexplicable astronomical occurences, UFOs, psychic ability, spontaneous human combustion, miracles, monsters, and evidence for advanced ancient civilizations (including a reference to the Vedic brahmastra weapon). Each section includes only well-documented cases. The official scientific explanation is offered and then placed into doubt.

Understanding Genesis, Unit One: Creation: Facts and Bias, video, Ken Ham. This is excellent for preachers. Showing how our assumptions affect what we see, it throws doubt on the supposed authority of science. Some slight sectarian references.

Origins: Creation or Evolution, Richard Bliss. Simple and clear, this is the best general textbook I know of. It contains some slight references to a young Earth. No sectarian religious content.

Origin of Life: Evolution/Creation, Richard Bliss and Gary Parker. This only covers whether or not life could have first arisen spontaneously from matter. Easy to understand. Slightly nods to the idea that life is simply a complex organization of matter. No sectarian religious content.

The Glories of Brahmacarya

3 Comments to “ Kick Out Darwin”