Krishna comes to conquer our hearts 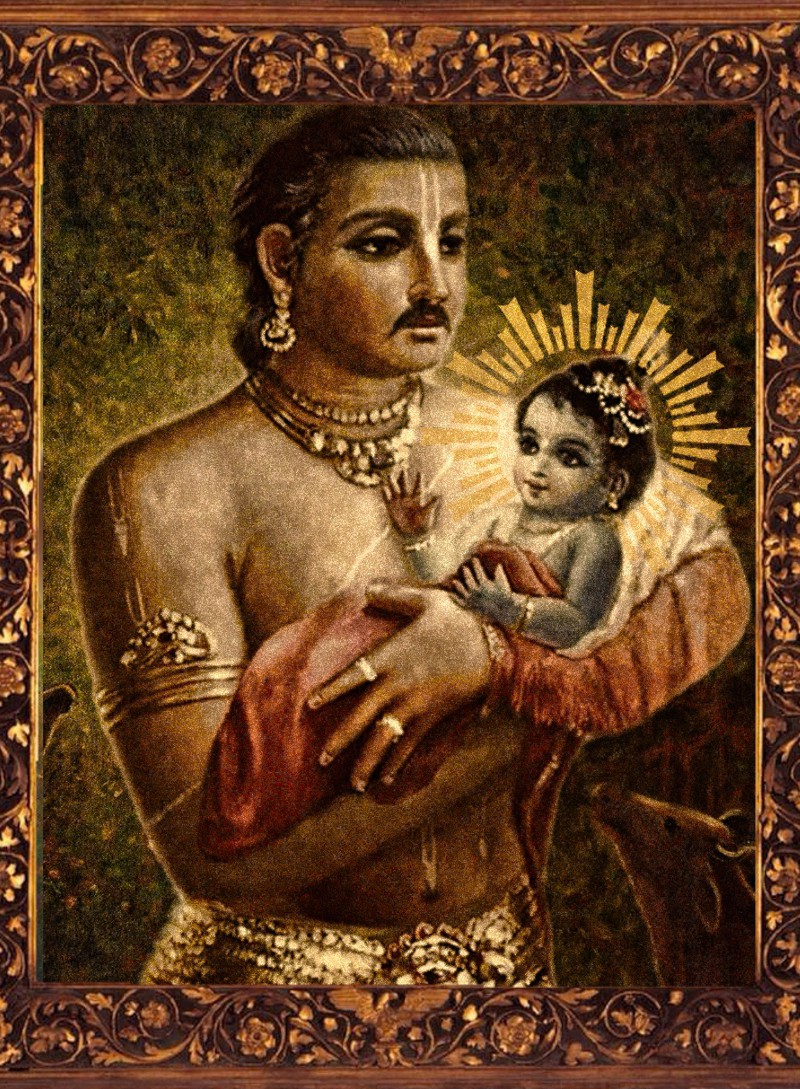 In spite of being bound by iron shackles and confined in a prison cell and in spite of having witnessed the killing of their six little children by Kamsa, Vasudeva and Devaki were indifferent to all the pains because they always meditated on Krishna and were eagerly waiting for his arrival.

And when finally beautiful Krishna appeared in their lives their hearts were inundated with infinite bliss. Not just Krishna’s presence but in fact his mere remembrance mitigates all the sufferings.

The celestial beings had warned Kamsa that his evil deeds would soon come to an end because the Supreme Lord has decided to appear as the son of Devaki and Vasudeva to annihilate him. Kamsa had fantasied that by chaining Vasudeva and Devaki and by locking them in a heavily guarded prison he would succeed in imprisoning the Lord and could even kill the Lord. The Supreme Lord is the Supreme Controller of this cosmic manifestation so he does not have to personally descend on this planet to kill an insignificant and worthless tyrant like Kamsa. Lord could have sent any of his servants to kill him or mere by his glance he could have burnt the demon.

Krishna came not to conquer Kamsa but to conquer the hearts of all living beings – not by force but by love. His ever relishing pastimes of Vrindavan are so delightful that we all want to be part of it. And in fact he comes to invite us to join him in those amorous pastimes. The only price which we are supposed to pay is that we have to weed out all the material desires from our hearts and instead we should sow the seed of spiritual desires in our hearts. Krishna’s unparalleled beauty, unforgettable pastimes, indefinable valor have continuously charmed the hearts of millions of people since ages.

Krishna is also supremely independent. So when Krishna wanted to leave the prison cell and go to the house of Yashoda then nothing could stop him. Immediately the iron shackles of Vasudeva and Devaki opened, the prison cells got unlocked automatically and all the security guards went into deep sleep. That day dark clouds were hovering in the night sky. Heavy rain accompanied with thunderstorm and lightening had made the night dreadful and too dark. But amidst all these, Vasudeva was fearlessly carrying Krishna to the house of Yashoda which was in Vrindavan. In spite of darkness Krishna gave him the vision so that he could see everything clearly. The Yamuna River was overflowing but she too gave passage to Krishna and Vasudeva to cross over and reach Vrindavana safely.

So like Vasudeva if we too establish Krishna in our hearts then we too can fearlessly cross over this material ocean. So when we find ourselves surrounded by too many unpalatable situations, when friends have turned into foe, when future looks too grim and we find ourselves utterly helpless then at that time if we give the reins of our life in the hands of Krishna, the Supreme Controller, then He will surely not just protect us but will guide us towards a path which is free of all miseries and full of all bliss. When we enthrone Krishna in our hearts then we will feel completely sheltered and protected and no amount of material pain will disturb us. Devotion to Krishna guarantees unlimited benefit as confirmed by Krishna himself – “In this endeavor there is no loss or diminution, and a little advancement on this path can protect one from the most dangerous type of fear.” Bhagavad Gita 2.40. So when Krishna appears in our life then all fear disappears.

“Anyone and everyone can become God.” This philosophy is propagated by certain so called spiritual preachers. In order to mislead the gullible people they assert that by chanting certain mantras or doing certain types of meditation one becomes God. But Krishna did not chant any mantra nor he did any sort of meditation to become God. He was always God. And the moment he appeared in this world he had all the qualities of God. All the Vedic books very clearly tell that Krishna is the Supreme God. Srimad Bhagavatam 1.3.28 states, krsnas tu bhagavan svayam, Lord Sri Krishna is the original Personality of Godhead. Brahma Samhita too says, “ishvarah paramah krishnah” i.e. Krishna is the Supreme Lord. Krishna’s appearance and pastimes totally debunks this myth that anyone can become God. Krishna appears to establish religious principles to ensure that we, his children, by following those principles ameliorate our life and achieve everlasting happiness.

Krishna took birth in a dark prison cell. We too are currently prisoners of lusty desires, revengeful thoughts and insatiable greed. But if we pray Krishna to appear in our heart then as he freed Vasudeva from the iron shackles he will also free us from all unwanted impurities and will remove all ignorance which is binding us in material consciousness.

Janmashtami is Krishna’s birthday. On this special day, if we endeavor to understand him by worshipping him, serving him and discussing his transcendental pastimes then we would surely achieve him and will even become eligible to go back to Krishna’s abode. “One who knows the transcendental nature of My appearance and activities does not, upon leaving the body, take his birth again in this material world, but attains My eternal abode, O Arjuna.” Bhagavad Gita 4.9

Janmastami on the Jaladuta
How to Celebrate Janmashtami

Krishna Consciousness Need Not Be A Big Slog

When we the prisoners fall in love with our captors