‘The Walking Monk’ in Surrey with tales from cross-Canada trails 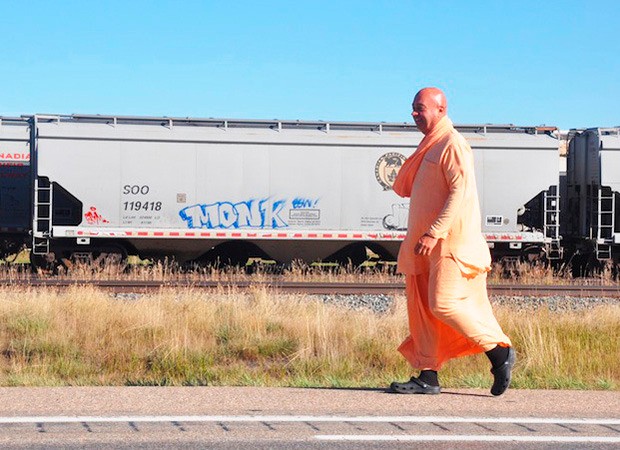 SURREY — The last place you’d expect to find a guy nicknamed “The Walking Monk” is in a car heading toward Chicago.

So apparently Bhaktimarga Swami does not walk everywhere, despite the moniker he’s earned for hoofing it across Canada an impressive four times.

The Ontario-born Swami, who finished his last such trek in 2014, is currently halfway through a similar walk across the U.S., in another effort to promote a “more car-free, carefree lifestyle.”

This week, he’ll be in Surrey to attend a pair of events, and the Now caught up with Swami – known as John Peter Vis before he adopted a monastic way of life back in 1973 – via cellphone as he motored down an interstate in Illinois earlier this week.

“Yesterday was a momentous day where I stopped at the midway point in America, in Nebraska, and now I’m making a return journey back to Toronto, ultimately, my home place,” Swami explained in an interview on Monday (Aug. 8).

“It’s a pleasant day and we’ve had a great trip so far doing half of the U.S. The whole idea is to reconvene next spring and do the second half, the western part, heading west.”

Two decades ago, in 1996, Swami set out on his first cross-Canada walk as something of a 100th-birthday tribute to a mentor of his. Putting his “feet and heart together” that year, he started in Victoria and made it all the way to Cape Spear, Newfoundland, with many stories to tell.

“I’d always wanted to see Canada closeup,” he recalled, “because before I was a monk I hitchhiked or flew and took buses, things like that, but I wanted to see it the way it was done by the ancients, you know, the way you should do it, especially because it’s a kind of birthright for a monastic person to do this kind of thing.”

He enjoyed the “CanWalk” experience enough to complete three more cross-country journeys in years since.

“I went through a lot of pain, physical,” Swami admitted. “The biggest challenge of all is walking on an angle – it’s like walking on a beach. But nevertheless, everything else compensated for that (pain), including meeting fantastic people, meeting characters, being confronted by black bears, grizzlies, whatnot, and finally I became an addict, I like it, gotta do it again.”

His first coast-to-coast walk was documented in “The Longest Road,” a 2003 National Film Board of Canada movie about the Trans-Canada Highway.

While in the U.S. recently, a spell of hot weather prompted Swami, 64, to experiment with nighttime walking, starting at 9 p.m. and ending at 3:30 a.m.

“It was quite nice (in Omaha and other parts of Nebraska), you know, as long as you had a safe area to walk through, on trails, basically,” he said. “You’re not allowed to walk on the freeways, so the choices in America are a secondary highway or a back road.”

In Surrey this week, Swami will make an appearance at Ram Mandir (8473 124th St.) on Friday evening, Aug. 19, and is also scheduled to visit the market at Newton’s Zaklan Heritage Farm on Saturday, Aug. 20, from noon to 2 p.m.

Across Canada these days, he shares his “Tales from the Trails” at community centres, yoga studios, libraries, schools and other places.

“It’s always an adventure and you don’t know what you’re going to deal with on the day ahead,” Swami related.

“What happens when you’re walking is you start to appreciate the little things around you and everything becomes significant,” he added. “Those of us who are obsessed with the fast pace of life, we just don’t even know what’s in our midst. By walking, you pick up on fantastic details out there.”

In one photo of Swami, the Now noticed he wore a pair of Croc sandals, and asked about a possible endorsement deal from the footwear company.

“There was something happening there with Crocs, yes, on my third walk across Canada,” Swami elaborated. “They sent me a pair, and that was the best I could do,” he added with a laugh. “I found other footwear, though, that was superior, but I do resort to my Crocs once in a while just because they’re pretty lightweight.”

Harinama in Auckland, New Zealand (Album with...
Harinam on a bus in Tel Aviv | ISKCON Israel (Album with photos)...