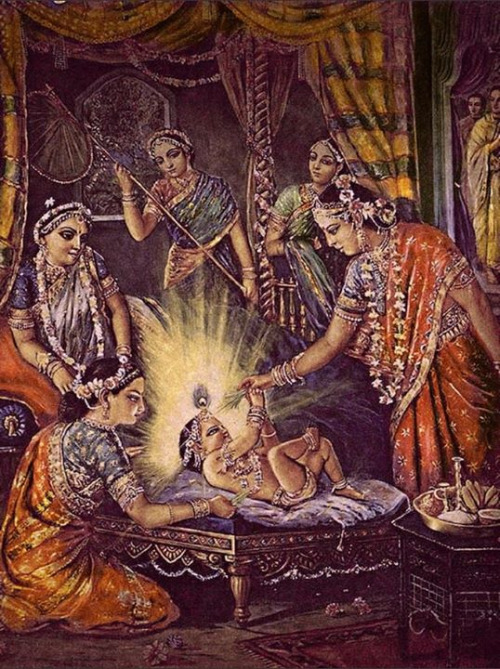 Srimati Sita Thakurani Appearance Day.
Shri Sita Thakurani is to be worshiped just as much as Sachidevi herself, as the mother of the universe. She is the eternal wife of Shri Advaita Acharya. She was the daughter of Shri Nrishinga Baduri. She was married to Shri Advaita Acharya in Phuliya Nagara. After their wedding, Advaita Acharya went to Nadiya, to live in Shantipura. Sita Thakurani was always absorbed in vatsalya prema for Shri Gaurasundara Prabhu, and, out of parental concern used to instruct Jagannatha Mishra on how to care for the boy.
According to Gaura-Ganodesh Dipika, Shri Sita Thakurani is Yogamaya. The Gaura-Parshada-Charitvali says that in Krishna Lila, she was Purnamasi, the mother of Sandipani Muni, grandmother of Madhumangal and Nandimukhi and a disciple of Narada Muni. (Gaura-Ganodesha-dipika, however, says that Paurnamasi in Krishna-lila became Shri Govinda Acharya in Chaitanya lila.)In Dvapara-yuga, during the celebration of Krishna’s birth ceremony, she was present in the house of Nanda, and at that time gave Nanda and Yashoda many instructions on how to care for the child. The Chaitanya Charitamrita gives the following account of Sita Thakurani’s visit to the house of Jagannatha Mishra after the birth of the Lord:
Sita thakurani
“One day, shortly after Shri Chaitanya Mahaprabhu was born, Advaita Acharya’s wife, Sita Devi, who is worshipable by the whole world, taking permission of her husband, went to see that topmost child with all kinds of gifts and presents. She brought different kinds of golden ornaments, including bangles for the hand, armlets, necklaces, and anklets. There were also tiger nails set in gold, waist decorations of silk and lace, ornaments for the hands and legs, nicely printed silken saris and a child’s garment, also made of silk. Many other riches, including gold and silver coinds, were also presented for the child. Riding in a palanquin covered with cloth and accompanied by maidservants, Sita Thakurani came to the house of Jagannatha Mishra, bringing with her many auspicious articles such as fesh grass, paddy, gorocana, turmeric, kunkuma, and sandalwood. All these presentations filled a big basket. When Sita Thakurani came to the house of Sachidevi, bringing with her many kinds of eatables, dresses, and other gifts, she was astonished to see the newly born child, for she appreciated that except for a difference in color, the child was directly Krishna of Gokula Himself. Seeing the transcendental bodily effulgence of the child, each of His nicely constructed limbs full of auspicious signs and resembling a form of gold, Sita Thakurani was very much pleased, and because of her maternal affection, she felt as if her heart were melting. She blessed the newly born child by placing fresh grass and paddy on His head and saying, “May You be blessed with a long duration of life.” But being afraid of ghosts and witches, she gave the child the name Nimai. On the day that the mother and son took bath and left the maternity room, sita Thakurani gave them all kinds of ornaments and garments, and then also honored Jagannatha Mishra. then Sita Thakurani, being honored by mother Sachidevi and Jagannatha Mishra, was greatly happy within her mind, and thus she returned home.”
Sita thakurani loved Magaprabhu in Vatsalya Rasa and Mahaprabhu loved Sita thakurani as His own mother. Sita Thakurani used to cook various bhoga for Mahaprabhu whenever He came to their house. Sita Thakurani always used to keep something special for Mahaprabhu in her house.
Sita devi is indirectly glorified in many prayers. One example is – Narottama Dasa Thakura in His song Sri Krsna Chaitanya prabhu doya koro more addresses Advaita Acharya as Sita Pati Advaita gosai – O! husband of Sita devi please bestow mercy upon me for only by your mercy can one achieve Mahaprabhu and Nitai.

The Lord Will Glance Into the Direction of Those Who Plead for Mercy!

THE BIGGEST THREAT TO OUR WORLD!!! (1 min video) By Sivarama Swami