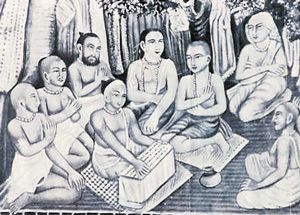 Recently, in Alachua, the local GBC segretary Sesa prabhu had a program for about one month where he sat under a canopy outside the temple each Sunday feast with a sign “Ask a GBC.” So the devotees had the chance to approach, ask and discuss different GBC related questions.

We thought of having a similar arrangement here on Dandavats, so that all devotees could have the opportunity to contact and ask, not only members of the GBC body, but also other leaders as gurus, sannyasis, authors and heads of different projects in Iskcon.

You can write your question (within the Dandavats posting guidelines!), and we will try to have them answered as soon as possible.

Below, Praghosa dasa answers some of the questions we recieved recently:

Answer: 1. Probably the biggest challenge facing the GBC today is staying chaste and loyal to Srila Prabhupada and his mission while at the same time having the intelligence and courage to adjust things according to time, place and circumstance. On one side we could change nothing and remain in the ‘safety zone’. On the other hand changing things whimsically or only due to vox populi etc., would mean entering a very dangerous zone. Neither of these extremes would be acceptable to Srila Prabhupada who was both fierecly loyal to the principles of Krsna Consciousness while at the same time he was an extraordinary innovator. So getting the balance right on the above is certainly one of the challenges we face.

Answer: It would depend on the GBC of course but the general day is usually pretty intense (probably one of the reasons why many GBC’s have health difficulties) rising early for the morning program and then throughtout the day engaging in a combination of preaching activities, management duties as well as any crises that arise and of course counselling devotees. Then of course for the grhastha GBC’s they also have families to consider!

4. Why does it seem to take so long for the GBC to make decisions?

Answer: The first point to make is that the decisions that appear to take a long time are generally very complex. Another point to make is that often the issue that is needing a decision is not known to all the GBC members. If you are the GBC for China you are not going to be so familiar with issues in Sweden or Chile. So the first thing that has to happen is that all GBC’s are fully briefed on whatever the issue is. Then there is a period of discussion that takes place among the GBC members and of course this is generally done via e mail which also slows things down. Then finally an informed decision can be made. There is little doubt that the GBC body gets through far more work when they are assembled together each year in Mayapur than they do during the year when they are scattered throughout various parts of the world.

5: Is the GBC favorable to discuss internal lskcon problems in pubblic forums, like the internet, and if not why?

Answer: In principle yes, although there are always going to be some constraints. The simple answer is that whatever is best for the person involved and the society would determine how the issue is discussed. Sometimes it might be appropriate to do so in public, sometimes not so. Srila Prabhupada was very careful not to discuss inappropriate subject matters in public. Still on principle as many issues as possible should be discussed in public.

Establishing the Division of Legal, Accounting and Regulatory Compliance