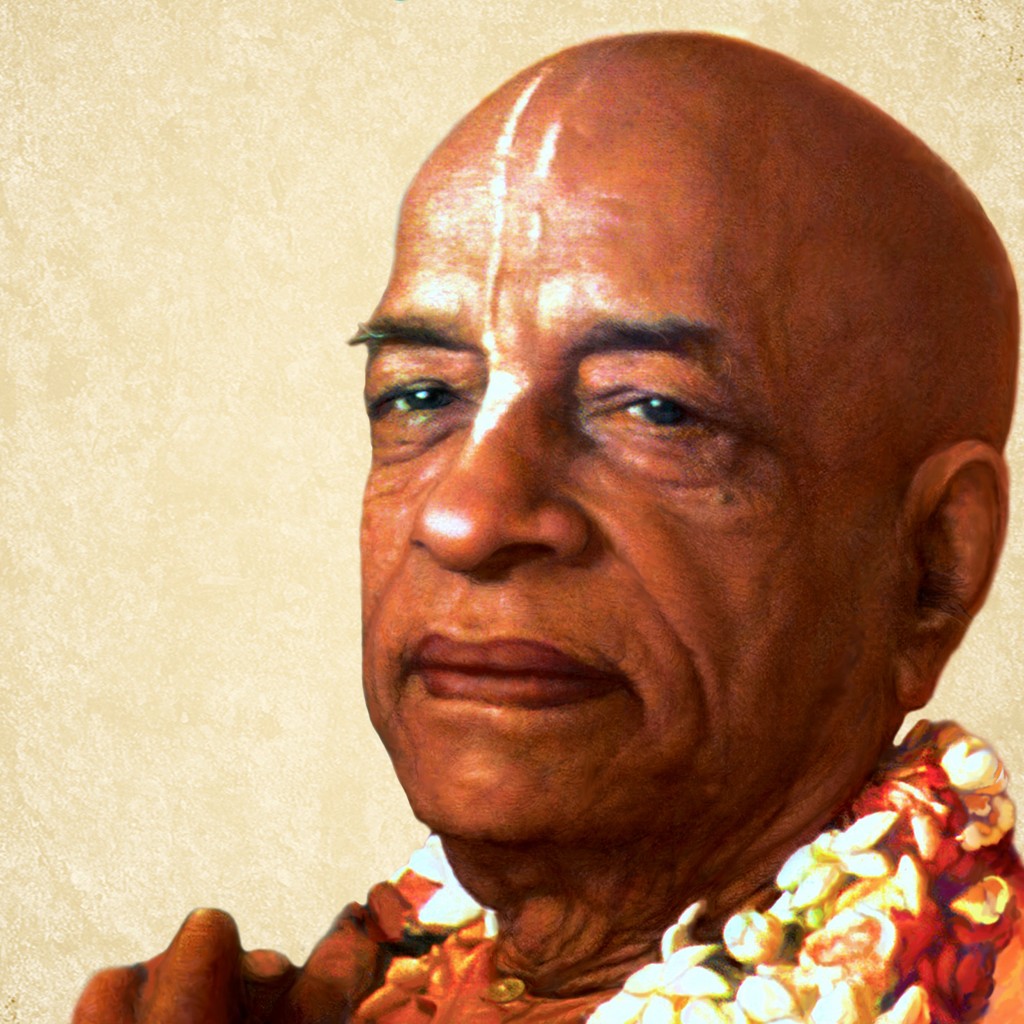 Nara Narayan: The minute I sincerely begged, his eyes floated around to the side and he looked at me. I froze. That moment seemed like an eternity. He neither beckoned nor rejected, just observed. My whole system collapsed from the inside out. I said, “Oh my God.” All sorts of confusing emotions ran through me. I thought, “I must straighten myself out and think things through. I am not ready to become his disciple yet.”

Harivilasa: Prabhupada looked at me for the first time. His look was very weighty. I could barely look at him.

Kaliyapani: I had my hands folded, and as he very slowly passed right by me, he looked up at me and returned my gesture, which astounded me. Then our eyes met for one or two seconds. That glance is probably the most memorable experience of my life, because it seemed as if time stopped. I felt that Prabhupada saw thousands of my nonsense births and still completely accepted me in spite of everything. It was an experience that was timeless, that was in another dimension.

Radhanatha Swami: When I got up Srila Prabhupada was in front of me. I was on my knees looking up at Srila Prabhupada, who had a serious, concerned expression and was looking right at me. I felt that he was looking into my soul and that it was touched by Srila Prabhupada’s glance. Never before in my life had I had a sensation like that…..Prabhupada stood silently looking at me, penetrating me with his glance. It seemed like hours. Perhaps it was about thirty seconds.

Jadurani: If Prabhupada just casually or even quickly looked at us, it had tremendous significance. Like many devotees, I felt that he wasn’t just seeing my me. It was almost embarrassing, but at the same time it was not embarrassing because you knew that not only was he seeing beyond the body, but he was seeing beyond the faults and beyond the interactions of the modes of nature. He was seeing the soul, which is so full of wonderful qualities. It was embarrassing, and then it went beyond embarrassing; it was blissful when he would glance at you.
We hear that when Krishna took lunch with His cowherd boyfriends, everyone would think, “He’s just looking at me, it’s just me and Him.” That’s how it was with many of us and Prabhupada. If ten people were in the room with him, each had a personal story of the same moments.

Sureshvar: Finally his eyes fell on me. It’s the only time I remember Srila Prabhupada looking directly at me, except for my initiation. He looked at me with such compassion while I was sitting there with a stupid grin on my face. His look said to me that I was an idiot but he still loved me. I thought, “That’s right, Srila Prabhupada, I’m an idiot. You love me, and I’m an idiot.” I was blissful.

Brahmananda: Prabhupada came in. He was to get up on the platform, but instead he stopped, turned, and looked at me. I’ll never forget that. It’s burnt into my memory.

Rambhoru: Prabhupada repeatedly looked around and then looked back at me. Although I had tried to hide myself, I had made myself more obvious. Every time Srila Prabhupada looked at me, my heart broke. I felt humiliated by his glance, and I started to cry. I sobbed and sobbed, and after about ten minutes I felt purified. I felt clean and rejuvenated. It was my first experience of the glory of being humiliated by a pure devotee.

Yasomatinandan: Prabhupada stopped and looked at me, and I realized he was actually looking at me—a soul, not my body. His look said, “Where have you been?” Prabhupada’s eyes had a profound effect on me.

Visakha: At that juncture, Prabhupada looked at me right in the eyes and, although we had looked at each other before this, this was the first time at such a close distance. We were a couple of feet apart. It was a most memorable experience. Prabhupada’s eyes were dark, and they seemed bottomless. I felt that he saw way past the obvious, way past the body and even past the mind. He could actually perceive my consciousness, which was discomforting because my consciousness was far from what it should have been.
You can say his was a penetrating look. But ordinarily the word penetrating implies a critical or judgmental or harsh look. Prabhupada’s look was none of those things. It was a caring, gentle, concerned, and perceptive look. At that time, since it was the first of several times I would experience this, I was quite surprised by how perceptive I felt he was. In the months and years that followed, when he looked at me, my reaction would always be that I was not where I should be in terms of my Krishna consciousness. But rather than being discouraged with my lacking, I wanted to improve, to become more Krishna conscious, just to please him.

Mahakratu: Prabhupada stopped and looked at me. We were very close to each other, looking into each other’s eyes for what seemed like ages. I stood there frozen. At that time, the first time that I had seen Prabhupada came back to me. His eyes were moist, and there was such warmth in them. And their depth was so great that I felt I was looking into another world. It was amazing.

Brahmatirtha: Prabhupada looked right through me as if I wasn’t there. It was as if I was a transparent sheet of glass. Only Prabhupada could have humbled me with that look, I hope for the rest of my life.

Vrindavaneshvari: When I came up to the vyasasana and Prabhupada asked me the four regulative principles, I could hardly speak, and when he looked at me, my head jerked away as if two magnets were repelling each other. It was strange. I couldn’t look at him. I felt that he could see right through me and he knew exactly who I was, where I was at, and what a rascal I was. It was very cleansing. It was so intense that even when I tried to look at Prabhupada again I had to look away.

Candramauli Swami: It seemed like he was looking at me and looking through me. I’ll never forget that look. I thought, “Oh, my God, he’s seeing what I don’t want him to see.” The fact that he noticed me was a nice experience but the other half of it was, “I’m afraid of what he’s seeing.”

Divyanga: At one point, and I’ve heard other devotees have said this happened to them too; Prabhupada looked right through me. It was like some kind of electronic transmission of sorts but I knew that he knew. He looked right into me and I almost fainted. I was freaked out for a second. Then he turned away and I was just surprised. But that was the time when Prabhupada looked into my soul.

Kalakanta: I remember when I was first introduced to Prabhupada with some other library party members. When Prabhupada looked at me, like so many of my God-brothers, I felt that he was looking right through me. I felt like a little insignificant spec of dust in the universe and completely unworthy of being engaged in his service. I was feeling that way and I heard from Srutakirti in one of his books about what Prabhupada was really thinking in his perception when he would look at his disciples that way. He was thinking, “How can I engage this person in Krishna’s service?”

Jaya Gauri: Nobody knew what was happening so that gave him the reason to pay specific attention to me and to look deeply into my eyes. He looked at me as if he could see this life, my past life and all the dirt in my heart and the good things if I had any.

Sama Priya: Prabhupada affected everybody so deeply. His kindness is the kindness of Krishna. He saw the soul in all living beings. All his disciples had felt that glance of Srila Prabhupada that pierces through all the anarthas and bodily identification.

Rasananda: Then I paid obeisances and, rising up from the obeisances, I looked up and he was looking at me with that penetrating look that gave the one being looked at the understanding that this great personality sees our soul.

Draupadi: I just looked up at Prabhupada and Prabhupada looked down at me and he said, “Hare Krishna!” and a big, big smile on his face. It was like at that time everything just went spinning. It seemed that I had been traveling through so many universes and so many lifetimes just to come to that point, to see my spiritual master and spiritual father and pure devotee of the Lord stood before me just looking at me in this first meeting.

Vrindavaneswari: Sometimes in my mind I’d be thinking – I was young – “Oh, I wish Prabhupada would look over here, I wish he would look at me.” All of a sudden, Prabhupada would be looking directly at me, piercing me with his eyes, and I felt very foolish.

Tribangananda: Then he looked at me right in the eye and said, “So what is the use of so many stars when with one moon you can light up the whole night?” And it was such a touching experience, Prabhupada talking in that way directly looking in my eyes so deeply, seeing for the first time Prabhupada’s depth of purpose.

One Response to “An unbearable glance”