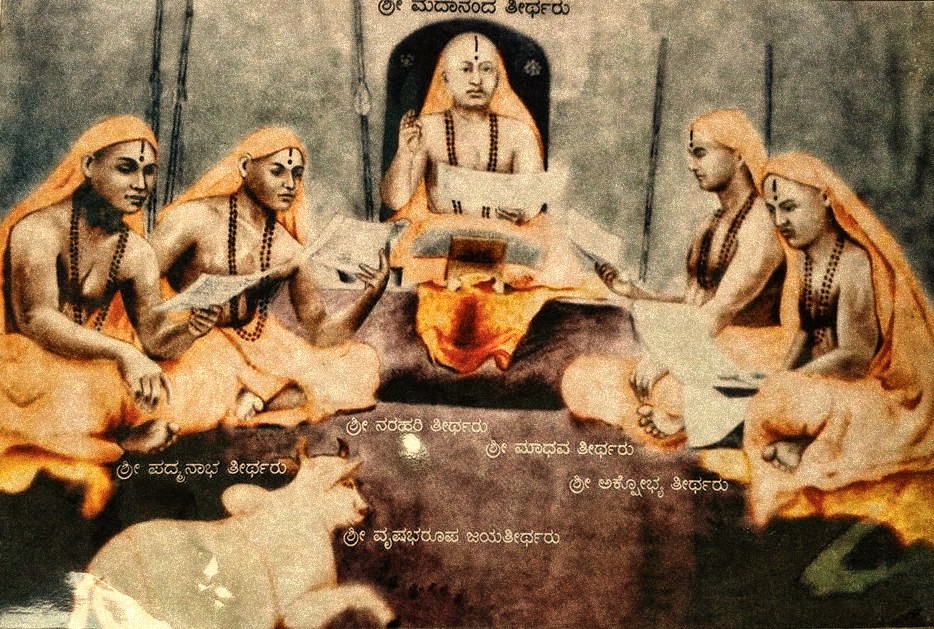 “Sripada Madhvacarya took his birth at Udupi, which is situated in the South Kanarada district of South India, just west of Sahyadri. This is the chief city of the South Kanarada province and is near the city of Mangalore, which is situated to the south of Udupi. In the city of Udupi is a place called Pajaka-ksetra, where Madhvacarya took his birth in a Sivalli-brahmana dynasty as the son of Madhyageha Bhatta, in the year 1040 Sakabda (A.D. 1119). According to some, he was born in the year 1160 Sakabda (A.D. 1239).

In his childhood Madhvacarya was known as Vasudeva, and there are some wonderful stories surrounding him. It is said that once when his father had piled up many debts, Madhvacarya converted tamarind seeds into actual coins to pay them off. When he was five years old, he was offered the sacred thread. A demon named Maniman lived near his abode in the form of a snake, and at the age of five Madhvacarya killed that snake with the toe of his left foot. When his mother was very much disturbed, he would appear before her in one jump. He was a great scholar even in childhood, and although his father did not agree, he accepted sannyasa at the age of twelve. Upon receiving sannyasa from Acyuta Preksa, he received the name Purnaprajna Tirtha. After traveling all over India, he finally discussed scriptures with Vidyasankara, the exalted leader of Srngeri-matha. Vidyasankara was actually diminished in the presence of Madhvacarya. Accompanied by Satya Tirtha, Madhvacarya went to Badarikasrama. It was there that he met Vyasadeva and explained his commentary on the Bhagavad-gita before him. Thus he became a great scholar by studying before Vyasadeva.

By the time he came to the Ananda-matha from Badarikasrama,Madhvacarya had finished his commentary on the Bhagavad-gita. His companion Satya Tirtha wrote down the entire commentary. When Madhvacarya returned from Badarikasrama, he went to Ganjama, which is on the bank of the river Godavari. There he met with two learned scholars named Sobhana Bhatta and Svami Sastri.Later these scholars became known in the disciplic succession of Madhvacarya as Padmanabha Tirtha and Narahari Tirtha.

When he returned to Udupi, he would sometimes bathe in the ocean. On such an occasion he composed a prayer in five chapters. Once, while sitting beside the sea engrossed in meditation upon Lord Sri Krsna, he saw that a large boat containing goods for Dvaraka was in danger. He gave some signs by which the boat could approach the shore, and it was saved. The owners of the boat wanted to give him a present, and at the time Madhvacarya agreed to take some gopi-candana. He received a big lump of gopi-candana, and as it was being brought to him, it broke apart and revealed a large Deity of Lord Krsna. The Deity had a stick in one hand and a lump of food in the other. As soon as Madhvacarya received the Deity of Krsna in this way, he composed a prayer. The Deity was so heavy that not even thirty people could lift it. Madhvacarya personally brought this Deity to Udupi. Madhvacarya had eight disciples, all of whom took sannyasa from him and became directors of his eight monasteries.Worship of the Lord Krsna Deity is still going on at Udupi according to the plans Madhvacarya established.

Madhvacarya then for the second time visited Badarikasrama. While he was passing through Maharashtra, the local king was digging a big lake for the public benefit. As Madhvacarya passed through that area with his disciples, he was also obliged to help in the excavation. After some time, when Madhvacarya visited the king, he engaged the king in that work and departed with his disciples.

Often in the province of Ganga-pradesa there were fights between Hindus and Muslims. The Hindus were on one bank of the river, and the Muslims on the other. Due to the community tension, no boat was available for crossing the river. The Muslim soldiers were always stopping passengers on the other side, but Madhvacarya did not care for these soldiers. He crossed the river anyway, and when he met the soldiers on the other side, he was brought before the king. The Muslim king was so pleased with him that he wanted to give him a kingdom and some money, but Madhvacarya refused. While walking on the road, he was attacked by some dacoits, but by his bodily strength he killed them all. When his companion Satya Tirtha was attacked by a tiger, Madhvacarya separated them by virtue of his great strength. When he met Vyasadeva, he received from him the salagrama-sila known as Astamurti. After this, he summarized the Mahabharata.

It was reputed that there was no limit to the bodily strength of Purnaprajna, Madhvacarya. There was a person named Kadanjari who was famed for possessing the strength of thirty men. Madhvacarya placed the big toe of his foot upon the ground and asked the man to separate it from the ground, but the great strong man could not do so even after great effort. Srila Madhvacarya passed from this material world at the age of eighty while writing a commentary on the Aitareya Upanisad. For further information about Madhvacarya, one should read Madhva-vijaya, by Narayanacarya.

To date, in the Udupi monastery there are another fourteen Madhva-tirtha sannyasis. As stated, Udupi is situated beside the sea in South Kanarada, about thirty-six miles north of Mangalore.

Most of the information in this purport is available from the South Kanada Manual and the Bombay Gazette.”

Srila Madhvacarya, quoting Padma Purana, states: vivikta-drsti jivanam dhisnyataya paramesvarasya bheda-drstih. “One who has clear vision and who is devoid of envy can see that the Supreme Lord is separate from all living entities, although He is situated in every living entity.” Madhvacarya further quotes from Padma Purana: