Neophyte, but Pure! His Divine Grace A. C. Bhaktivedanta… 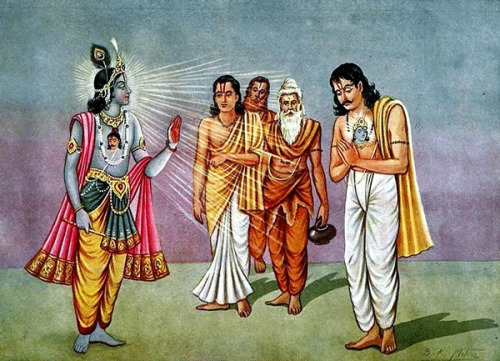 Neophyte, but Pure!
His Divine Grace A. C. Bhaktivedanta Swami Prabhupada: When one is situated on the neophyte platform, one cannot understand the devotional ingredients of a pure, unalloyed devotee. However, when the novice engages in devotional service — especially in deity worship — and follows the order of a bona fide spiritual master, he is a pure devotee. Anyone can take advantage of hearing about Krishna consciousness from such a devotee and thus gradually become purified. In other words, any devotee who believes that the holy name of the Lord is identical with the Lord is a pure devotee, even though he may be in the neophyte stage. By his association, others may also become Vaishnavas.
KK Bindu #385: With first time translation of a little known song glorifying Srila Raghunath Bhatta Goswami. CONTENTS INCLUDE:
* NEOPHYTE BUT PURE – His Divine Grace A.C. Bhaktivedanta Swami Prabhupada speaks about the power of someone following the process of bhakti.
* ALL GLORIES TO RAGHUNATH BHATTA GOSWAMI – A first time translation done especially for this issue of Bindu of a Bengali song by the medieval poet Radha Vallabha Das.
* VRINDAVAN SADHUS AND BHAGAVAD-GITA – Another first time translation done for this issue of of an excerpt from a little known book by a disciple of Srila Gopal Bhatta Goswami.
* IDEAL RESIDENCE IN VRINDAVAN – Another fresh translation from Srila Prabodhananda Saraswati’s Vrindavan-mahimamrtam. This issue can be downloaded here: https://archive.org/details/bindu385

We Love Cows (Album of photos)On our farm we really love cows….