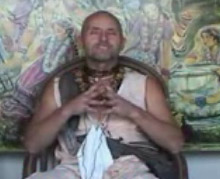 (Scroll down to see photos from the cremation ceremony and a video in seven parts of Radha Kunda Prabhu in Vrindavana 2004 entitled: This is my spiritual life )

It is with mixed feeling that I hear about the departure of my beloved God brother and close friend, Radha Kunda prabhu, from this world. He has gone to join Sri Sri Radha and Krishna in their nitya lila, somewhere in Gokula in some universe, but we are left without his loving friendship and association. I had heard some months back of his possibly terminal health problems, so at least the news did not come as a totally sudden shock. I first met Radha Kunda in the mid-U.S. City of Saint Luis, Missouri.

I was temple president there at that time, which would have been approximately 1972 to 1974 or so. He arrived at the temple sporting long hair, and easily could have been confused with being an ordinary hippie. Later, however, he told me that for years before becoming a devotee he had often lived an extreme ascetic life in caves, eating only green things from around the area, even the moss in the cave itself! His appearance as an ordinary hippie, therefore, was not his full story. However, he was going by the name “butterfly”, so he became “bhakta butterfly”. We did not try to force him to go by his legal name, whatever that was. He did nicely in brahmacary life, and was always an enthusiastic devotee. After some time, I sent his name in to Srila Prabhupada, recommending him for initiation. His name came back as “Radha Kunda”.

This in itself is very significant, for it surely teaches us something important about Srila Prabhupada. Prabhupada had never physically met him, yet as “tri-kala jna” (one who knows the past, present and future), he could see Radha Kunda prabhu’s future attachment for the most sacred pond, and that he would frequently reside there (as recommended in the Nectar of Instruction) for long periods of time. About ten years ago, I would sometimes see Radha Kunda prabhu in California (west-coast U.S.A), where I come from. On one occasion, we were both at an all-devotee festival out in the countryside, attended by about 700 devotees from all over the state. Radha Kunda was the principle cook for all those devotees, and he was super excellent in his skill–I mean, full-on gourmet of the highest quality. He could whip out a super-tasty, exceptional (on a world scale) feast for so many devotees in les than two hours! One sunny afternoon I asked him if he would like to do a guided Vaishnava meditation (I am professionally trained and certified in guided visualization, but it is a skill I very rarely apply).

He thought it was a great idea, so we went to a quiet place next to a beautiful lake where the devotees were camped. With this type of visualization, you never know what the type of experience is going to be, as it is always unique and spontaneous. To invoke auspiciousness, I asked him to meditate on the beautiful reddish, decorated palm of the hand of Srimati Radharani, as she stands in the temples benedicting the devotees. I did not know what was going to follow next, but it came as a great shock. He saw Srimati Radharani Herself, in full, standing before him! That was certainly far more than I had expected! She was wearing an apron, indicating her appreciation for his cooking service to the devotees.

Then he reported seeing just the head of Srila Prabhupada in the corner of his vision. I asked him to bring Srila Prabhupada more into the picture, so he did, but still only his head was showing. I could not see what he was seeing, but he continued to describe his vision. Srila Prabhupada was extremely grave. He did not speak anything, but he communicated a non-verbal Narashingha guru message with thunderbolt weight. His unmistakable, very clear message was, “Don’t think that you have attained this vision by any means of your own merit! It is by my mercy alone, and do not ever foret this!”

As Radha Kunda prabhu relayed this message to me, I certainly felt struck by a thunderbolt, it was so heavy! I was very shook up, and was shook up for days afterward, as Srila Prabhupada’s message reverberated throughout my heart. That was the sum total of the experience, but those two things together–the mercy of Srimati Radharani and the powerful instruction from Srila Prabhupada, was more than enough! Over the years I did not have Radha Kunda prabhu’s association at all, until I came to India four years ago. I would then see him in Vrindavan. He showed me photos of a cave in the Himalayas where he would go to stay every year. There was a village near by, across from the mountain. He proudly showed me pictures of the villagers, also, whom he was teaching to chant. The villagers accepted him as their siksa guru, and would bring him things to eat and other gifts, just like in the days of yore. He was continuing his very austere life of penance. In these later years, Radha Kunda prabhu dived deep into hearing and chanting about the pastimes of Sri Sri Radha and Krishna.

The very last time I saw him was at the sacred pond, Radha Kunda itself. I had gone there for darshan with the pond, and I met my old friend, Nava Yogendra Swami sitting there. I sat down next to him on the steps, and we were chatting. He asked me, “Do you know Radha Kunda prabhu?” I said, “Yes, I sent in his initiation and performed his fire jajna years ago”. In the next moment, Radha Kunda prabhu himself jumped down like a monkey from the stairs above us. Maharaj had known he was there, but I did not. It was a fun mini-pastime. I had the distinct feeling that Sri Sri Radha and Krishna were watching the fun (certainly it is their place of nitya lila), and that they got some pleasure out of it. Those who knew Radha Kunda prabhu know that he also had his “salty side”. His primary complaint in life was that he felt our society should immerse itself deeper in Hari katha.

Those friends who want to honor him the most should do exactly that, for indeed, it is pleasing to Srila Prabhupada and to Sri Sri Radha and Krishna. I will certainly miss him and his pleasing, jovial nature. He was usually smiling and happy. It is hard to believe that I will never see him again.

Yet we must remember Srila Prabhupada’s words–“There will be another ISKCON in the spiritual world”. That does not mean that upon arrival we should look for the oval, white, pink and blue lotus sign that says “ISKCON devotees this way”. Rather, we must understand that we are all part of Srila Prabhupada’s eternal group, and are eternally under his direction, though our bodies and rasa in Vraja will be most perfect. May we all follow in the footsteps of Radha Kunda prabhu, and be personally taken Home by Srila Prabhupada and by Srimati Radharani herself.

The following photos were put together by Subhangi dd and Sahadev Prabhu, good friends of Radha Kunda das for the pleasure of the devotees world wide. Click on them to get the full size picture.

This is my spiritual life

3 Responses to “Departure of Radha Kunda prabhu – video and photos”