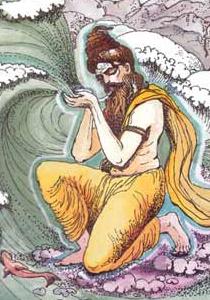 The following was taken from “Our Merciful Mother Ganga” (page 377):
Ganga-saptami or Jahnu-saptami appears in the month of Vaisakha (Vaisnava month of Madhusudana-April/May) on the 7th day of Sukla-paksa, or the waxing fortnight of the full moon. After the Ganga descended onto the Himalayas, the river entered the sacrificial arena of Jahnu Rsi and disturbed his mediation.

As stated in the Padma Purana (Patala-khanda 85.49):
“Formerly on the seventh day of the bright half of Vaisakha, Ganga was drunk through anger by Jahnu, and let out from the cavity of his right ear.”

Also in the Narada Purana (Uttara-bhaga 41.37):
“It was on the seventh day in the bright half of the month of Vaisakha that the Ganga was drunk up by Jahnu Rsi out of anger and cast off later on through his right ear.”

There are other accounts regarding how Jahnu Rsi released Ganga. Therefore, Ganga also became known as Jahnavi, or the descendent of Jahnu.