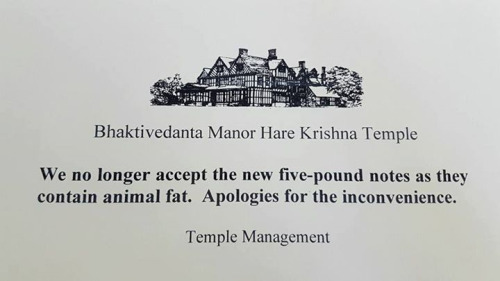 Iskcon’s Bhaktivedanta Manor and several Hindu temples in UK joined a vegetarian cafe in BANNING new £5 note because it contains animal fat - as singer Morrissey says people who use them should donate their OWN bodies!
Satish Sharma from the National Council of Hindu Temples UK told BBC Asian Network he’s aware of three temples which aren’t allowing the new fivers, including Bhaktivedanta Manor in Aldenham, Hertfordshire.
Rainbow Cafe in Cambridge is also refusing to accept the notes as its owner said they were “repulsive”.
Speaking more about the issue, the outspoken singer Morrissey said: ‘If it had been revealed by the Bank of England that the new British Five Pound note contained slices of cat or dog, the country would be in an uproar.
To read the entire article click here: https://goo.gl/wsYGuP