Identifying the Deity as Bhagavan. Question: Kindly inform me on… 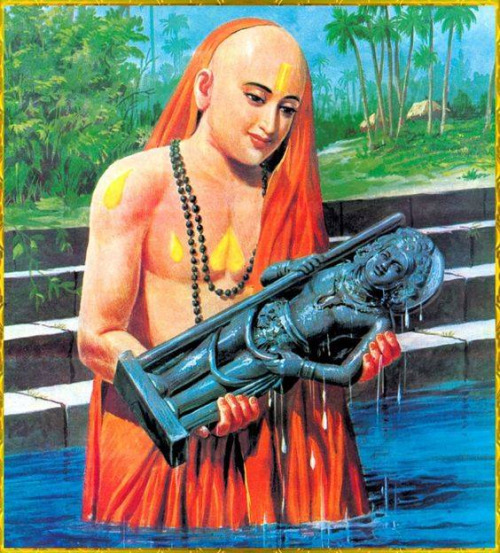 Identifying the Deity as Bhagavan.
Question: Kindly inform me on what basis we identify Krishna/Bhagavan Vigraha, which is sat chit ananda, with deity/archa which is made up of matter. I want to know the Gaudiya logic and appropriate scriptural backing.
Romapada Swami: The Personality of Godhead is the source of all energies, both material and spiritual. Because He is full of inconceivable potencies, God can convert His different potencies according to His own will, much as an expert electrician can employ the same electric energy for both heating as well as cooling purposes. For the Lord there is no difference between material and spiritual energies; that He can transform His energies as He wills is Srila Vyasadeva’s sublime teaching of shakti-parinamavada. He is the controller of both energies, and He cannot come under their influence at any time, as we do. A fundamental and axiomatic principle in spiritual science is that unless one accepts this inconceivable nature of God’s potencies, there is no way of understanding Him. The conclusion is that Krishna, being omnipotent, can transform matter into spirit and spirit into matter as He desires, and He can accept our service through any sort of medium.
The Supreme Lord is called ‘adhoksaja’, which means One Who is beyond the reach of our mundane, imperfect senses. It is also stated that we can approach the Lord only by engaging our senses in His service. How are we to serve and learn to appreciate Him who cannot be perceived? Therefore, out of causeless compassion for the conditioned souls, Krishna appears in a so-called material form, just to become visible to and accept His devotees’ service.
Just as the Supreme Personality of Godhead accepts various incarnations, similarly He takes on forms made out of clay, wood, metal and jewels, which according to shastra is known as archa-vigraha. By doing so this does not mean that His sac-cid-ananda form has been touched by material influence. The archa-vigraha is not fashioned from an artist’s whimsical imagination but is the eternal form of the Lord, confirming in exacting detail to scriptural injunctions. The Lord Himself personally descends in the archa-murti at the request of the acharyas, and invests all His spiritual potencies within the Deity. Thus the devotees get an opportunity to easily approach Him and serve Him even with their present material senses, thereby purifying and spiritualizing their senses.
As Krishna explains in Bhagavad-gita, He is not visible to all (BG 7.25), but reciprocates according to a devotee’s degree of surrender to Him (BG 4.11). Thus, to the degree of one’s faith and devotion, one is able to perceive the presence of the Supreme Lord in His Deity form. There are many historical instances wherein the Deities have personal exchanges with the worshiper, talk to them and accept their offerings. But for one who considers Him to be merely stone or wood, He continues to remains so.
Therefore scriptures warn us to carefully avoid such mundane perception of the archa-vigraha. (Isopanishad Mantras 5,8 purports, Padma purana, quoted in Cc Madhya 5.95-97, etc)

Married to the Holy Name.Samapriya devi dasi: Betrothed by…