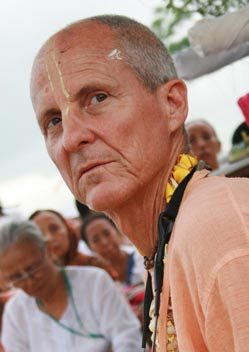 I recently opened amazon.com and found the following books being promoted. The authors must be descendants of Hiranyakasipu, Kamsa and other demons.

The titles speak for themselves. Learned people see their arguments as foolish, but their word jugglery bewilders innocent peoples. We should be inspired to become more determined to distribute Srila Prabhupada’s books, and to educate ourselves and society in general to understand them. That requires spreading the holy name widely.

What follows are a few of the titles:

God Is Not Great: How Religion Poisons Everything by Christopher Hitchens

The God Delusion: by Richard Dawkins

This one was number in London last December, and is seen prominently in bookstore everywhere. In a major Cambridge bookstore there was a special display with the heading “Read the Divine Dawkins”. He is a geneticist and a fervent promoter of Darwin’s theories. I met a nice philosophy professor who formerly worked with Mr Dawkins at Oxford. He said that no one could be more fanatic about his “religion”.

These books are widely read and the authors teach in Universites. So we can understand that we have to be very conversant in vaisnava siddhanta in order to free the conditioned souls from the misleading influence of Kali..

These attacks are not aimed solely at us, but at religion in general. Here are some statements from Srila Prabhupada, just to clear the air.

Prabhupada: No, there are many… First thing is that my students are advised, “No illicit sex, no meat-eating, no intoxication up to the point of smoking cigarette and drinking tea, and no gambling.” But this is their life. How they can give up this? That is… It is a shock. Therefore they say, “brainwashing,” that “How a gentleman can give up all these things?” Many… No many. A few of my students, they left. They said that “Swamiji is denying the primary necessities of life.” They left. They could not tolerate even. So I do not make any compromise. That you want to become my student you have to give up these things. So the responsible parents, they are appreciating that “My son is now purified.”

So our little attempt is to spread Bhagavad-gita as it is, and whatever it may be, it is being accepted in the Western countries. Not by all. But the people in general, now the… Feeling the weight, they have now began opposing. Indian man: Have seen the new light. Prabhupada: Yes. They’re opposing me very vigorously in America. Indian man: And that is a good sign. Prabhupada: Yes. That is our victory, when there is opposition, and that is our victory. In spite of opposition, we are selling our books in large quantity. Yes. Large quantity. What is the one week sale that? Eighteen lakhs or something like…

Pictures from Houston
On the road again