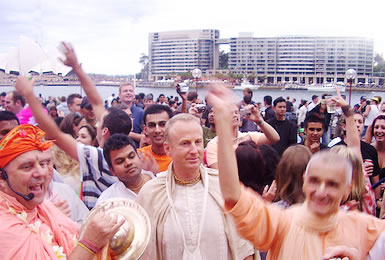 Please accept my humble obeisances. All glories to Srila Prabhupada

As Kirtan is the single-most important activity of our movement, the GBC decided this year at Mayapura to form a “Kirtan Standards Committee”. I would like to briefly inform you of the progress in this regards.

The request of the GBC is to produce a book, laying out ISKCON standards and guidelines for Kirtan and related matters. By Mayapura 2008 the committee is expected to make a presentation to the GBC.

Our Krishna Consciousness movement is practically based upon music and dancing. Letter to: Mr. Levine, 25 January, 1969

Lord Caitanya’s movement of Krishna consciousness is full of dancing and singing about the pastimes of Lord Krishna. CC Adi 2.2 purport

Sankirtana means when many persons combine together and chant and dance. 740417bg.bom

It is often experienced that without any checking, or guidelines, the standards for Kirtan, Bhajan, playing musical instruments, dancing, kirtan etiquette, dressing, consciousness, etc develop in numerous ways, many of which may not be pleasing to Srila Prabhupada or favourable for the awakening of pure devotional service. Many of them may be speculative, introduction from apa sampradayas or a show of false ego. It is the business of the committee, whilst inspiring everyone in the performance of kirtan, to nonetheless lay out the guidelines for this and future generations, based on Srila Prabhupada’s directions.

We can hardly imagine the possibilities of deviations in generations to come when even now 30 years after Srila Prabhupada’s departure we are faced with this phenomena.

During Prabhupada’s personal presence many incidents occurred where Prabhupada himself intervened to correct and establish the standard. There are other situations where no specific directive from Prabhupada is available. In these less clear areas the need to focus on Prabhupada’s approach would be even more essential. There are areas where according to time place and circumstance Prabhupada gave different directions. It is a challenge and a great privilege to render this service to ISKCON. We feel it is of great value to the society.

The committee consists of HH Lokanatha maharaja, HH Bhaktivikas Swami, HH Janananda Gosvami (convenor), HG Hari Sauri prabhu, HG Jagajeevan prabhu and HG Aniruddha prabhu.
We have set up a conference to exchange with each other. Later on after sorting through all the available materials and analysing them we will be calling upon the open forum of devotees to offer their input and comments.

On the 21st May, Hari Sauri, Aniruddha and Janananda Gosvami met to formulate a plan of approach and to establish a format for the book.

We are looking at presenting our findings in the easiest understandable and applicable way so the devotees can access the information as simply as possible. At the present the committee is finalising our strategy and approach to the outline – thematic etc.

We will need some devotees with some expertise, time and willingness to help with the data sifting etc. If any devotee would like to assist in this important service please contact myself. More details of this service will be released shortly.

House for sale
The "Savior-Guru" syndrome