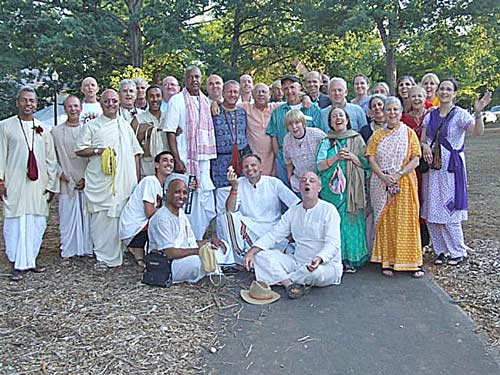 We, your local servants at New Panihati Dhama ISKCON Atlanta, thank all the devotees for coming to our festival. We understand the great expense most of you occurred to attend this year. Hotel costs were much higher than normal due to the many special events in and around the city that same weekend. Gas prices and airfares were exceptionally high as well. Thanks so much for coming despite the many challenges.We hope that the festival activities were enjoyable, prasad was sufficient and satisfying, and that you were able to get a good night’s sleep. We will work harder next year to make your visit even more comfortable.

Sri Sri Gaura Nitai are the deities that Srila Prabhupada saw during his historic visit to ISKCON Atlanta in 1975. Srila Prabhupada gave one of the shortest and most emotional arrival address in ISKCON history; speaking of how merciful Lord Caitanya and Lord Nityananda are. Srila Prabhupada commented on how Lord Krsna demanded that we first surrender and then He would give us love of Godhead; but that these two Lords don’t demand anything, and simply request us to just take this love of Godhead. Srila Prabhupada became full of ecstatic love and could not speak anymore.

In honor of the 40th anniversary of the incorporation of ISKCON, our beloved Sri Sri Gaura Nitai deities were worshiped with a maha-abhiseka only for the second time in Their 32-year presence here in New Panihati. All who attended the event will surely agree that it was a very ecstatic and beautiful offering.

Here are my memories of the maha-abhiseka:

The abhiseka began at about 7 pm when the curtain dropped to reveal Their Lordships standing ready for Their bath in a large pool in front of the altar. At the same moment, the demigods immediately offered their own abhiseka to the New Panihati community in the form of a downpour of rain. I had just returned from informing His Holiness Jayapataka Swami in his quarters that we were about to begin and Maharaja reassured me that he would arrive in time for the panchamrita offering. I entered the arena and said, “let’s begin” to the awaiting pujaris. I was stunned to hear the heavy rain hitting the temple and could see the downpour outside from the temple room windows. Not a drop of rain had falling when I walked down to the temple a few seconds earlier.

By this time, His Holiness Jayapataka Swami had arrived (soaked from the rain), so the three swamis – HH Lokanatha, HH Hridayananda, and HH Jayapataka Swamis – began to offer the last two items before the panchamrita, tailam (musk and sandalwood oils) and a blended sesame seed paste that the maharajas smeared all over Their Lordships’ bodies. The paste was then washed off and the panchamrita offering began.

After the swamis had offered panchamrita, the festival sponsors began to bring their kalashes to pour the contents into the Swamis’ waiting conch shells. 2nd generation devotee Visvambara prabhu leaded the chanting while playing the harmonium, accompanied by Bali on flute and Sugosh and Kishor on mrdanga. The bhajan was very sweet. A special area was roped off for the bhajan group and our special festival donors. Everyone sat absorbed in watching the abhiseka and chanting along with the ecstatic bhajans – mahamantra, panchatattva mantra, and various other traditional prayers. After some time of offering panchamrita, HH Lokanatha Swami took his turn seated at the microphone and led the chanting while playing harmonium.

After a couple of hours of chanting and bathing the deities, the devotees could no longer sit still. The special roped-off area gave way to the enthusiasm, and everyone except Lokanatha Swami and musicians stood up and began to dance, filling the packed temple room with movement. Devotees danced practically on top of each other in the ecstasy of Maharaja’s bhajans-turned-kirtana. Finally, a fine powder of rice and kumkum was offered to the deities and They were bathed a last time with scented water to cleanse away the dusting. A final pushpa abhiseka of fragrant rose petals was offered as a colorful, dry shower. The devotees screamed, “Haribol! Haribol!”in their desire for the intense moment never to end. The curtain closed and the abhiseka came to an end, even though the devotees continued to chant and dance for some time afterwards.

The abhiseka had gone on much longer than planned and it was about 9:30 pm. Devotees lingered, deciding whether to attend the stage performances or wait for a late darshan of the deities during the evening arati. The festival organizers tried to encourage devotees to honor the performances down on the stage, but it took 30 minutes to get the temple room kirtana to stop, and of course, many remained in front of the altar to chant for the last arati.

A video of this abhiseka is being prepared by Rasacarya das of Rasa films and we will be posting announcements on the Internet when it becomes available. For now, please have a little taste of the nectar by checking out the two-minute digital camera video clip on this website.

Again, we thank all of those who attended and pray that next year, you’ll return and bring along with you those who had wanted to make the journey but somehow couldn’t. It is our pleasure here in New Panihati to serve you.

Sikhi Mahiti das and your servants at ISKCON Atlanta