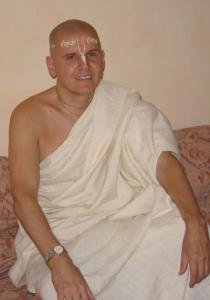 This letter underscores what Srila Prabhupada said about his books versus our preaching. He said something to the effect that “what is the good of your 5 minutes preaching, instead just give the person a book.”

Please accept my humble obeisances. All glories to Srila Prabhupada!

Nearly three years ago I ordered astromaps to find out where to go to find my guru and spiritual path – choosing you at random and not caring much that you were “in the service of Sri Sri Radha Govinda” whose names I did not understand anyway. I discovered that my birth time was actually seven minutes later than the one I gave you, so I didn’t relocate but pondered your words as you warned, “beware of bogus gurus”. In addition to the protection you gave me verbally, you rendered more service with the gift you sent, Bhagavad Gita As It Is.

I had taken it out of a public library almost 10 years ago while trying to learn about yoga, but returned it due to my heart being bitter and not wanting to absorb Srila Prabhupada’s purports. I went back to reading the Mayavadi type Gitas and other similar literatures, remaining very unhappy and lost.

Upon receiving Bhagavad Gita As It Is from you in September 2004 I kept it by my bedside and read a little each night, for almost two years before seeking out devotees. In early summer 2006 I began chanting the maha mantra on my own. Then on August 15, I decided it was now or never, I needed to hear this mantra chanted from the lips of pure Vaisnavas, as Srila Prabhupada had advised. I found out there was a center at 26 Second Avenue in NYC and took a two hour train ride alone, not knowing what to expect. Arriving sweaty and with a rapid heartbeat, I was greeted by two brahmacharis and went to sit down for kirtan for the first time.

It is difficult for me to describe what happened to my body and mind while first hearing Hare Krsna Hare Krsna, Krsna Krsna Hare Hare, Hare Rama, Hare Rama, Rama Rama Hare Hare from these devotees – all my pain and fear disappeared and I felt I was being held in the arms of someone who loved me very, very much. I continued attending temple programs and when asked how I came there, I tell devotees it was because of a gift from you. I am indebted to you, Shyamasundara Dasa, because it was your mercy combined with that of Krishna and Srila Prabhupada that arranged for Bhagavad Gita to be put in my hands again, this time with the intelligence to understand and pursue Krishna Consciousness.

One Response to “The transcendental power of Srila Prabhupada’s books”