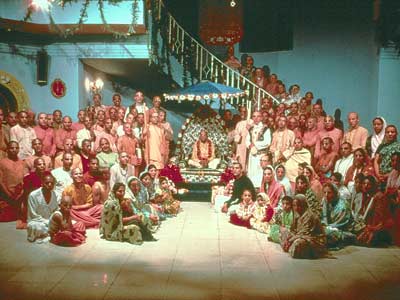 First a little bit of history: In 1859 was proclamed on mexican constitution the separation between the church and government and the confiscation of all churches possessions by Benito Juárez. This law was proclamed due big interferences by catholic church on politics at that time. After some years this law was sobreseed by impractical, priests retook ministeries, and all people continued with his religious observances.

But the law was not been removed, this caused an empty space on mexican laws, officially religion didn’t exists, but the reality was that relligion continued and grew and diversified in all these years. ISKCON first temple (Mexico City) was opened in 1970 by Citsukhananda das (ACBSP), and Guadalajara Temple in 1975

Since 1859 all buildings used by religion was property of Mexican Government, but all new temples was registered as particular property due non-official existence or religions. This official non-existence caused really big problems with property successions, and originate common abuses from non-scruple people (from inside or outside congregations) who ambitioning the richness into these buildings, not only the buildings, also the pharapernalia, statues, paintings etc.

Finally Mexican Government saw the need to regulate the proliferation of different religions and to protect actual religious buildings and richness from abuse and steal. In 1992 launched Law for Religious Associations and Public Worship.

Basically Mexican Religious Association and Public Worship Law and his office has the following purposes:

What this means? Laic state in Mexico means no official religion, this is still different to atheistic state. Laic state allow all people to choose his own religion. Since 1992 all religions can be registered as AR (Religious Association). All buildings used at time of law launching (1992) are Federal Property since 1992 and lent forever to the same religion association have in use for public worship. All pharapernalia, icons and statues used for public worship at time of law launching (1992) are in same way protected and need to be registered also in INAH (History and Antropology National Institute). This means also Deities are federal property. Mexican government grants to provide buildings each religion need to his worship affairs.

What means last listed point? Simple, this means Mexican Government offer periodically some federal properties to be used by non-profit and religions for his ministerial purposes. This means BBT, FFL, Preaching centers, etc, can have his own buildings while they continue doing his preaching activities without the need to pay any rent for.

These laws has been caused that in 2003 are more than 80,000 federal property buildings registered in use of almost all officially registered religions in Mexico, and is growing. How much for ISKCON Mexico, none, only the two original temples are on file, but not yet officialized, not more.

This means also that is legally impossible that in Mexico can happen same issues like New Vrindavan (Prabhupada’s Palace of Gold) separation (in 80’s) or like Bangalore Temple few years ago.

Is very common that some devotees spend a lot of years as bramacaris in Temples, and when they want to be married goes out without any support. Is possible that ISKCON Mexico authorities offer to them, in good standard devotees, a department or so to live with the only one requisite to do public worship into. The same for the devotees that give full-time service on Temple or other programs.

How to do that?, simple also. 1. Ask for current list of disponible properties to CABIN (National Assets Valuation Commission – Federal Building Assets General Direction), 2. Do a search there. 3. Ask ISKCON Mexico autority to apply to CABIN for these property and expose preaching plans for.

2 Comments to “ Dharma is protected by government in Mexico”