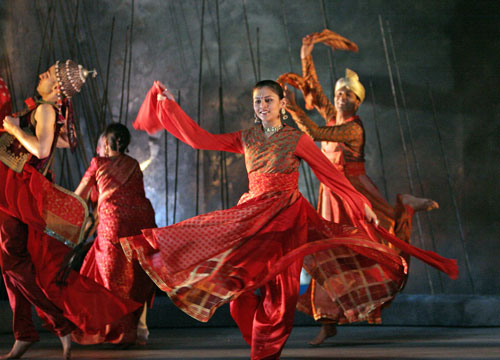 In June 2007 we experienced that the dreams of many come true: the Mahabharata, the most famous Indian epic, is being performed on a theatre stage. I went to the performance with my husband, guru and a few devotees from Oxford. A member of Iskcon, Gaura Lila Prabhu from Switzerland, was the co-producer of this professional project. Amongst the celebrities that prepared the play was a famous composer Nitin Sawhney, the writer Stephen Clark who won the Oliver Prize, and 27 dancers, singers, musicians and actors under direction of Stuart Wood, as well as the Karthak and Akram Khan choreographer Gauri Sharma Tripathi.

The result? A fantastic blend of singing, ecstatic dance, music and theatre. There was traditional Indian and modern music, which gave the Mahabharata a very vivid character, bringing up ancient the message of drama, together with its culture and philosophy, to a contemporary spectator. Due to the extensive range of topics that the Mahabharata deals with, only one theme has been portrayed and this was a story of Draupadi as the passionate catalyst of the worst war amongst wars – a war of Kurukshetra. Very often they recited Sanskrit verses from Mahabharata, especially from its heart, the Bhagavad-Gita. Krishna himself was portrayed in this play as a friend of Draupadi and also as an observer of the events, often engaging himself in them and helping his devotees. This production was therefore very inspiring for a devotee of Krishna, reminding us about the fact that God really has been present on the Earth and that he is a participant in our lives.

It is very encouraging that devotees are using Western professional theatre as a medium of communicating the theology and culture of Vaishnavism. I think this approach is more advantageous than inserting Vaishava culture into Western mediums through rock music because by going through the higher aspects of Western culture we will contact the higher classes.