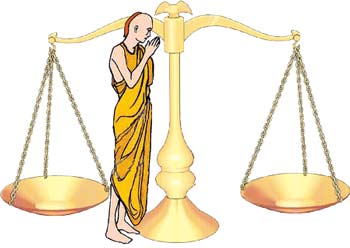 (A reply to Satyaraja Prabhu’s “Time to be Dharmic”)

What follows is not an official GBC position paper. Rather, it is a statement of one member’s personal views, expressed in response to Satyaraja Prabhu’s posting on Dandavat.com titled “Time to Be Dharmic.” I respect Satyaraja Prabhu’s right to express his opinions. At the same time, I feel the need to balance the scale. I pray that since Satyaraja Prabhu advocates forgiveness, he will also forgive me for any offense found in this reply.

Now the matter has proceeded to the point where the GBC executive committee has issued an interim instruction to Dhanurdhara Maharaja that he should not initiate. They have also petitioned the full GBC to discuss and then vote on whether or not that interim restriction should be extended for the rest of Dhanurdhara Maharaja’s life.

To inform that discussion and vote, each GBC member has received:

b) Dhanurdhara Maharaja’s reply /defense in that original case

c) A summary of the evidence from that case

d) A cover letter by Tamohara Prabhu, the director of the Child Protection Office.

Satyaraja Prabhu states that Dhanurdhara Maharaja “has paid his dues.” Actually, the original CPO decision of 1999 states that while Dhanurdhara Maharaja would immediately be restricted from initiating in ISKCON for five years, his future, permanent status as an initiating guru in ISKCON should be decided by the GBC. That is the question the GBC is taking up now. There is no double jeopardy here (being tried for the same crime twice). The GBC is simply responding to a question remaining from the initial case decision. The devotee community is now asking other questions of the GBC, such as “Should Dhanurdhara Maharaja continue as a sannyasi?” Satyaraja Prabhu criticizes the GBC for making decisions on high without allowing the devotees to be informed of or involved in the decision-making process. Yet when the GBC agrees to give serious consideration to questions from the devotees, he faults the GBC. Damned if we do, damned if we don’t. For Satyaraja Prabhu to demand that the GBC take up his questions but slam the door on the questions of others is inconsistent and unfair.

As for whether or not Dhanurdhara Maharaja did in fact perform the deeds he is accused of, there is no question about it. There is an overwhelming body of firsthand accounts. These abuses (and they are horrendous and heartbreaking) have been confirmed by numerous adult witnesses and admitted to by Dhanurdhara Maharaja himself. To brush these aside as “the dim memories of young minds” is profoundly insensitive to the victims and a distortion of the truth.

Satyaraja Prabhu argues that the abuses Dhanurdhara Maharaja engaged in, whatever the details, all occurred long ago, and the transformative power of bhakti has now made him “a pukka Vaisnava without question.” Thus, he should be forgiven for past offenses and be honored for his present preaching activities and character.

I regret having to mention the following, but Satyaraja Prabhu’s repeated claims and demands oblige me to do so. A case can be made for a questionable pattern of behavior that continues up to the present day, a pattern of one who may not yet be fully purified by the transformative power of bhakti.

There is the dark chapter of Dhanurdhara Maharaja’s first tenure as headmaster of the school from 1979 to 1986. He stepped down and then returned to the post in 1989. As late as April of 1995, against ISKCON policy and despite his personal public promises, Dhanurdhara Maharaja continued to covertly instruct teachers at the Vrindaban gurukula to beat students with sticks. Again, there are firsthand adult witnesses, photos of students covered with black-and-blue welts, and Dhanurdhara Maharaja’s admission of guilt. These events are not in doubt.

His compliance with the CPO decision was lukewarm and at times crossed the line, as confirmed by Tamohara Prabhu, the director of the Child Protection Office. Dhanurdhara Maharaja’s response to the CPO decision was not the surrendered embrace of both the spirit as well as the letter of the law that Satyaraja Prabhu presents.

Up until today, despite the firestorm his position of continuing as an initiating guru has created, Dhanurdhara Maharaja appears to maintain a deep attachment to initiating disciples. To resolve the current conflict, a number of senior devotees have recommended to him that he let others initiate those new devotees enlivened by his association, while he continues to help them via a siksha relation. This is not an unreasonable proposal. Rather, it is a principle under which ISKCON has functioned since its creation. All over the world, temple presidents, sannyasis, and GBCs guide and encourage devotees who are not their initiated disciples.

Vows of self-sacrifice for the greater good are found throughout the Vedic history. Bhismadeva gave up his personal desires, renouncing the throne and vowing to remain a brahmacari. In private conversations, many senior devotees have appealed to Dhanurdhara Maharaja to voluntarily vow to not initiate anymore, thus avoiding much grief for himself, his disciples, and the other members of ISKCON. Such a magnanimous act would earn him appreciation from around the world. Yet he has refused to do so.

This adamancy, added to all the other history above, serves as another indication that his continuing to initiate may not be best for him or for ISKCON in general.

Satyaraja Prabhu asks the GBC to consider the effect on Dhanurdhara Maharaja’s disciples, followers, and friends. No doubt this is one of the elements of this issue that pains the GBC the most. It is one of the reasons it has taken so long to resolve the situation. However, it should also be noted that the disciples and friends will take their lead from Dhanurdhara Maharaja. Imagine if he were to sincerely say to them, “This is the decision of the GBC. I accept that it is for my own purification and the good of ISKCON. Therefore, I will abide by, not bitterly but willingly, and I ask you to please do the same.” The storm clouds would part and we could all move forward together.

As for forgiveness, the GBC does not have the power or right to mandate that. It has to be given freely, by those offended. Therefore, the GBC executive committee has recommended that Dhanurdhara Maharaja allot 50% of his time to help heal the wounds of those abused in ISKCON’s gurukulas. This is not a punishment but rather the best means for him to actually earn their forgiveness.

I am sorry to have been obliged to speak so frankly. There is no doubt that Dhanurdhara Maharaja has another side to him, one where many good qualities are found. I regret having to lay out facts that will undoubtedly be painful and disturbing for his disciples to read. I can only pray that Dhanurdhara Maharaja will reconsider, voluntarily vow to not initiate anymore, and by such a magnanimous and saintly act help to begin healing this tragic rift.