A Flood of Happiness and Joy 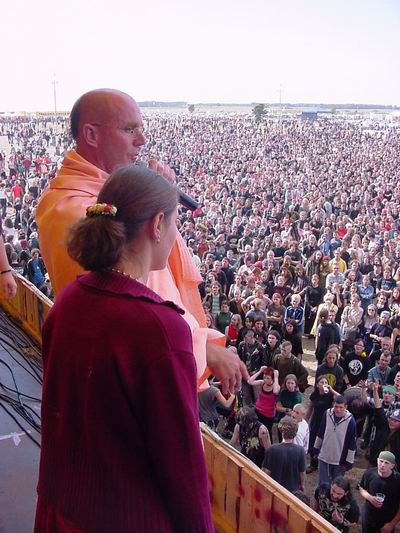 As the fire chief in Niechorze had predicted, it rained endlessly as we continued our festivals along the Baltic Sea coast in July. The Polish media attributed the unprecedented bad weather to global warming. Pious local farmers concluded it was because God was displeased with the government’s compromise on market prices with the European Union. One new devotee
(exhausted after many days of long Harinamas) went so far as to suggest we might be doing too many Harinama yajnas because yajnas cause rain to fall.

Whatever the reason, it didn’t keep people away from our events. When Polish national television sent a film crew to the coast to report on the unusually wet summer, they visited the opening day of our festival in Pobierowo. They planned to come for only twenty minutes, but intrigued by what they saw, ended up staying almost four hours.

“All the other events along the coast pale in comparison to yours,” said the woman reporter. “Your event is so big, so well-organized, and so entertaining that besides including it in our report we’re planning a documentary on your festivals.”

After interviewing several devotees, the film crew went into the crowd to interview guests. I was a little worried they might pick the odd person who would say the wrong thing, but Krsna sent a nice couple for the main interview.

“We visited this festival several days ago in Kolobrzeg,” said the wife with a smile.

“And we enjoyed it so much,” said her husband, “that we called our boss in Warsaw and got permission to extend our vacation four days longer in order to come here in Pobierowo.”

As the television crew was leaving, the producer spoke to Jayatam das, “Don’t worry about the rain,” he said. “You have more people at your festival than all the other events we’ve covered this summer put together.”

In the town of Miedzyzdroje we presented our festival in an amphitheater near the beach. Because of limited space we were able to put up only a few tents, and unsurprisingly it rained on and off throughout. During our regular festivals, guests can take shelter in the many tents around our sites, but in Miedzyzdroje they had to leave the amphitheater to find cover. Determined to enjoy the show, however, they would return to their seats as soon as the rain stopped.

I met one family on their way back into the amphitheater after a rain shower.

“We heard about this festival from our friends who came back from vacation last week,” said the man. “We drove 400 kilometers yesterday to come, so we’re making sure we see the whole show.”

As our crew prepared to leave one morning to set up the festival in Mrzezyno, Nandini dasi received a call from the captain of the port. “Sorry, but you are not welcome this year,” he said.

“But we signed a contract with the town office six months ago,” said Nandini.

As she telephoned the town office Nandini turned to me and said, “He’s probably expecting a bribe.”

By Krsna’s arrangement she got in touch with the head of Poland’s coastal ports. “I know this festival,” he said. “I went with my family in Kolobrzeg two weeks ago. I will let my subordinate know that you have my permission to hold it without any interference.”

With his blessings our men left but were soon confronted by our biggest opponent: rain. But this time it didn’t simply rain: it poured. Somehow the men managed to set up, but by the time I arrived in town with a bus full of devotees for Harinama, some of the streets had become flooded.

During a short break in the storm we jumped out of the bus and did Harinama along the sidewalks. We had managed to distribute only a few thousand invitations when the rain started again. We raced back to the bus and sat inside hoping for another break.

“How will anyone know about the festival if we can’t do Harinama?” I said, feeling exasperated.

“Don’t worry, Guru Maharaja,” said a devotee sitting nearby. “I was distributing books here last week, and everyone I talked to was planning to come to the festival today. I was amazed. Some said they had planned their vacations to coincide with the event. Most of them knew about it from the radio and internet. Even if we can’t do Harinama, we’ll get a big crowd.”

While we waited in the bus I had a devotee call the weather bureau. The report was worse than disappointing: “Continual rain through the rest of the day and into the night, possibly clearing late tomorrow afternoon.”

As it was obvious the rain wasn’t going to stop we proceeded to the festival site. My heart sank when I saw much of the area under water. “Looks like we’ll have to cancel another festival,” said Nandini who arrived at the same time.

“Don’t cancel yet,” I told her. “Let’s wait until the last possible moment.”

“But Guru Maharaja,” she said, “it’s pouring, the festival site is flooded, and most of the devotees are soaking wet. The festival is supposed to start in one hour. What hope is there?”

“I have a plan,” I said thinking fast. “Let’s send the devotees back to the base in the buses and have them change into dry clothes. In the meantime, if the rain stops we’ll call the fire department and have them pump the water out of the festival site like they did in Niechorze. Then the Manipur dancers can perform until our devotees get back.”

“It will take at least an hour and a half for the buses to go and get back,” Nandini countered. “And it will take time to pump the water out of the site. And that’s only if it stops raining.”

We quickly got the devotees into the bus and sent them back to change clothes.

The few of us remaining sat in the van looking out at the sky as the clouds continued rumbling and the rain pouring. Then suddenly, 45 minutes later, a ray of light burst through the clouds in the distance. It was the first sunshine we’d seen for days. It was so sudden that Amritananda das jumped up. “Look!” he shouted. “Sunshine!”

A minute later it disappeared, but for us it was a sign from heaven and gave us hope the festival might indeed happen.

To our amazement a strong wind began 20 minutes later, and in no time at all, there wasn’t a cloud in the sky. Just as the wind died, the fire department arrived with six large machines and began pumping water out of the festival area. Within an hour the site was dry. Throughout the entire time we all sat riveted to our seats.

As the fire department began putting their equipment away, I glanced towards the entrance to the port. I was stunned to see hundreds of people walking quickly in our direction.

“People are coming for the festival!” Amritananda called out.

“Turn on the generator!” I yelled to the sound technician. “Get the sound system and lights up and running! The show’s on!”

I turned to our stage manager, Vraja Kishore das. “Tell the Manipur dancers to get dressed fast.” I said. “They have ten minutes.”

As I ran around the festival site helping to organize everything, I looked at my watch. The festival was starting two hours late, but at least it was going to happen.

Within minutes, hundreds of people were sitting on benches in front of the stage as the Manipur troupe began the show with a dazzling drum sequence heralding the women’s performance of the rasa-lila dance.

Just then the devotees returned from the base. I’ll never forget the look on their faces as they stared out of the bus at the scene before them. The entire area was bathed in sunlight. Thousands of people were streaming into the festival site. Every tent was filled to capacity. The restaurant had a line 20 meters long, and the cooking-demonstration tent had a capacity crowd of 200. The yoga tent had 30 people sitting in the lotus position, their eyes closed as they listened to a devotee giving them instructions. As I walked towards the buses, people filed past me, many holding Srila Prabhupada’s books, which they had purchased at the book tables.

An elderly woman approached me. “My little granddaughter is in Germany and can’t come to the festival today,” she said. “She was here three years ago and won a sari in the dance competition at the end of the festival. She wears it every morning as she dances around the house before school, singing Hare Krsna.”

She gave me a piece of paper. “In particular,” she said, “my granddaughter wanted to say hello to Gokularani, Rajesvari-seva, and Mathuresvari. Can you pass them this message?”

“Now I’m going to the stage show to take some pictures and send them to her,” she said as she left.

As I kept walking I met Nandini who was speaking to a well-dressed man.

“This is the head of the coastal ports,” she said. “He decided to come and check whether everything was all right.”

“And to see the festival,” he said with a smile.

“His best friend is in India at the moment,” Nandini said, “and this friend is encouraging him to go there. But our friend here just sent him a text message saying ‘India, in all its glory, is here in Mrzezyno. No need to go anywhere else.'”

Our security company estimated the crowd at more than 5,000, and most people stayed until the end.

“Who’s going to believe all this when I write about it in the diary?” I said to Amritananda as we drove back to the base by the light of a full moon under a canopy of stars. “A deluge of rain suddenly turned into a flood of happiness and joy.”

“I believe it because I was there,” he said and started to smile. “And if someone wants to challenge it, we have 5,000 witnesses.”

“The whole world is now suddenly flooded by the nectarean waters of the ocean of pure love for Krsna. Now there is suddenly a great wonder of symptoms of ecstatic love never seen or heard before. All this has suddenly appeared now that Lord Krsna has descended in a form as splendid as molten gold!”

2 Responses to “A Flood of Happiness and Joy”