The Governor of Arizona issues Proclamation for Sri Krishna Janmashtami

Bhaktin Janet (Napolitano)- as His Holiness Ganapati Swami Maharaja says- the Governor of Arizona, U S A – issued another Proclamation for Sri Krishna Janmashtami, Tuesday September 4, 2007. 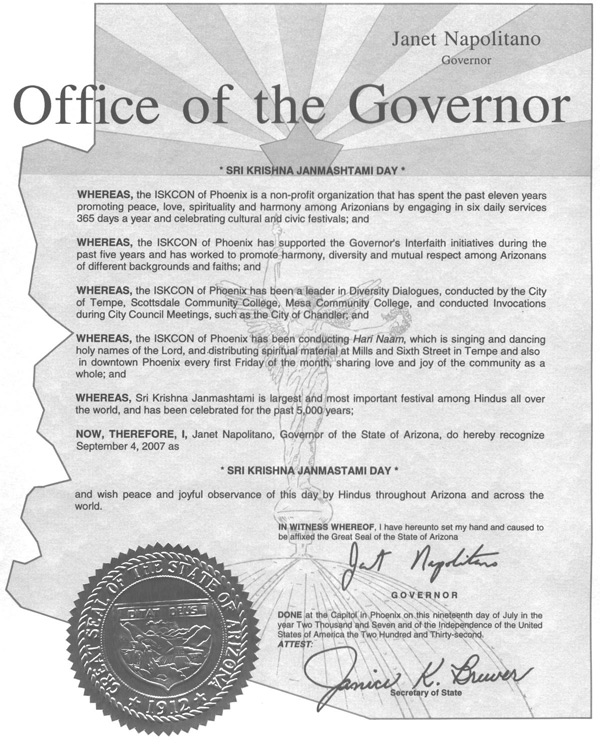 Last year, she became the first ever government official any where in the world to issue a Proclamation for Sri Krishna Janmashtami.

In it, she recognized “Hari Naam” – singing and chanting publicly on streets – conducted by ISKCON of Phoenix in Tempe and downtown Phoenix, Arizona and continued . . . . : ” Sri Krishna Janmashtami is the largest and most important festival among Hindus all over the world, and has been celebrated for the past 5,000 years”.

For photos at the Hari Naam, taken on June 1 which she briefly attended at Roosevalt and Third Street in downtown Phoenix, please click here.: 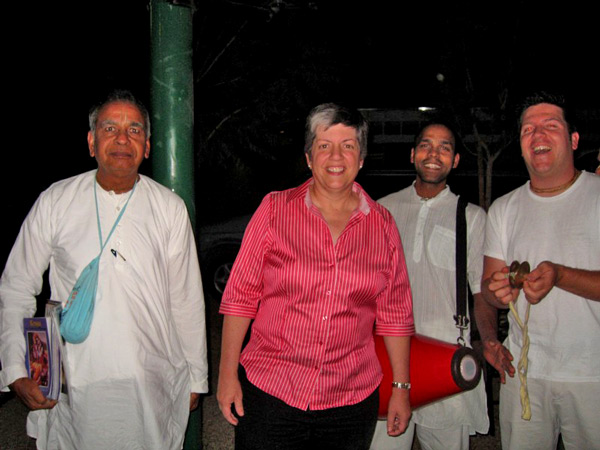 WHEREAS, the ISKCON of Phoenix is a non-profit organization that has spent the past eleven years promoting peace, love, spirituality and harmony among Arizonians by engaging in six daily services 365 days a year and celebrating cultural and civic festivals; and

WHEREAS, the ISKCON of Phoenix has supported the Governor’s Interfaith initiatives during the past five years and has worked to promote harmony, diversity and mutual respect among Arizonans of different backgrounds and faiths; and

WHEREAS, the ISKCON of Phoenix has been conducting Hari Naam, which is singing and dancing holy names of the Lord, and distributing spiritual material at Mills and Sixth Street in Tempe and also

in downtown Phoenix every first Friday of the month, sharing love and joy of the community as a whole; and

WHEREAS, Sri Krishna Janmashtami is largest and most important festival among Hindus all over the world, and has been celebrated for the past 5,000 years;

NOW, THEREFORE, I, Janet Napolitano, Governor of the State of Arizona, do hereby recognize September 4, 2007 as

and wish peace and joyful observance of this day by Hindus throughout Arizona and across the world.

IN WITNESS WHEREOF, I have hereunto set my hand and caused to be affixed the Great Seal of the State of Arizona
G O V E R N O R

DONE at the Capitol in Phoenix on this nineteenth day of July in the year Two Thousand and Seven and of the Independence of the United States of America the Two Hundred and Thirty-second.