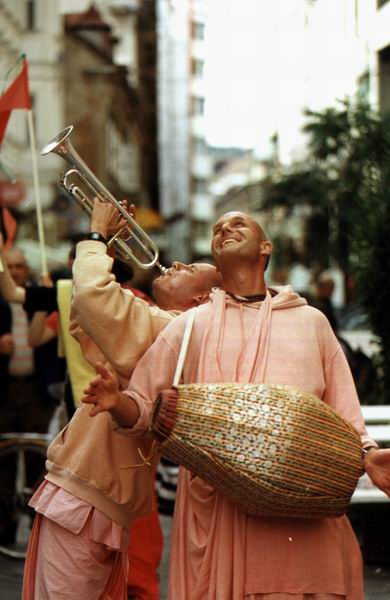 After Woodstock, the festival group returned to our base on the Baltic Sea to continue the programs in the coastal towns. There were still two weeks of summer left and we planned to do 14 festivals in rapid succession. After six weeks of rain, the sunshine had finally arrived, and tens of thousands of people were coming up to the coast to take advantage of the good weather.

Everything seemed auspicious for preaching. No reports were coming in of attempts to cancel our events or to evict us from our base, as at the beginning of the summer. I joked with the devotees that with the better weather, even our opposition had gone on vacation. We took full advantage of the situation, and by the Lord’s grace enjoyed smooth sailing to the end.

As we chanted along the crowded beach in Neichorze advertising the festival there, a devotee distributing invitations met a nine-year-old girl. “I know Krsna,” said the girl. “He’s the Supreme Personality of Godhead.”

“How do you know Krsna?” the devotee asked.

“My mommy reads the Krsna Book to me every night before I fall asleep,” she replied.

“Have you ever visited one of our temples?” the devotee said.

“Where did your mother get the book?” the devotee asked.

“She bought it on the beach last year, from someone like you,” replied the girl.

Then her face lit up. “Last night we read how Aghasura ate up all of Krsna’s friends,” she said. “Then Krsna jumped into the stomach of the monster and killed him.”

As we chanted along the beach people smiled and waved. I thought about how different it was from ten years ago when we had so much unfavorable media coverage. The anti-cult campaign has all but died out, due in part, I concluded, to the favorable impression people receive at our festivals.

“Each truth passes through three stages before it is recognized. In the first it is ridiculed; in the second it is opposed; in the third is it regarded as self-evident.”

As we had experienced on numerous occasions, thousands of people showed up at the festival that afternoon, the result of only one Harinama. Though the devotees were exhausted from Woodstock, they still put on a great show.

As the festival ended, I overheard a middle-aged man on his cell phone. “Mother,” he shouted, “I’ve been trying to get you to come to one of these festivals for years. I don’t care if you have to drive for five hours to get here. Today you missed the best one they ever had.”

The next day as 150 of us chanted and distributed invitations on the beach in Rewel, we were surprised to see our old friend the seal who visits us at least two or three times each summer. As we chanted along the shore it swam along only two meters away, attracting a lot of attention. Suddenly, two lifeguards, apparently unaware of the innocent nature of the animal, jumped into the water and began beating it with paddles. The seal quickly swam away.

That night at the festival in Rewel I visited the tent of Prahlad Nrsimha das, our festival astrologer. He is expert in reading charts and convinces practically everyone who consults him to purchase a Bhagavad-gita and a set of japa beads as the best means to deal with all of life’s reverses.

“Two children came to my tent when the festival opened,” he said. “They begged me to see their grandmother. They said she had been waiting in line at each festival here for the past two years, but had never had the opportunity to meet me.”

“I had them run home and get her,” he continued. “When she arrived I began reading her chart, but she just laughed and said she wasn’t interested. She said all the time she was waiting in line she was observing how happy the devotees were chanting Hare Krsna. She only wanted to know how to chant herself and go back to the spiritual world. She left with beads, chanting the maha-mantra.”

After leaving the Astrology tent I visited the fashion booth, where women can choose a sari to wear for the evening and have one of our girls help her put it on. Almost all the 300 saris on display had been taken.

A seven-year-old girl was standing outside dressed in a beautiful red and green sari. She had just returned from the gift shop with a set of beads and a beadbag. “She insisted on getting the beads,” her mother told me. “She said it was part of the uniform.”

She then turned to the girl. “The beads are not simply for dress, darling,” she said. “They’re meant for praying. If you want to keep them you’re going to have to learn the Krsna prayer and chant it on the beads. Do you understand?”

Moments later a woman came up to me, pulling her son by the arm behind her.

“My son is too self-conscious about the mole on his cheek,” she said. “We argue about it constantly. Please convince him he shouldn’t worry about it.”

Taken by surprise I hesitated for a moment. Then I looked at the boy. “Our understanding,” I said, “is that we are not these bodies. We are the spirit souls within the body. Compared with the soul, which is truly beautiful, everyone’s body is imperfect. So do not be so concerned about your outward appearance.”

The mother shook the boy. “You see,” she said. “The man says you’re not that body. You are a soul. So stop being so upset about that stupid mole.” With that she turned and took him away.

When I went into the Book tent, where our presiding Deities, Gandharvika-Giridhari, stood majestically on an altar, I saw some of our maintenance crew building a small fence in front of the altar.

“Why are they doing that?” I asked Rasamayi dasi.

She started laughing. “Guru Maharaja,” she said, “everyone wants to take a picture in front of Radha and Krsna. Sometimes there are so many of them they start to argue who goes first. The fence is to protect the Lord.”

The next day as we advertised the festival along the beach in Pobierowo, to our great delight the seal showed up again. All the towns along the coast are close together and apparently it swims from one to the other. When we saw the seal, we moved our chanting party closer to the water. As always, the seal swam along, stopping when we did and moving with us as we proceeded. Soon people on the beach noticed it and more than 100 of them began following us.

Ahead, many people stared at the crowd. Unaware of the seal, they thought the crowd was excited by the singing and dancing. I turned to Sri Prahlad. “This seal is an animal,” I said, “but it’s doing devotional service. Because it’s following us, these people are getting the chance to hear the holy names.”

Sri Prahlad laughed and quoted Srila Prabhupada: “This maha-mantra springs automatically from the spiritual platform, and as such anyone can take part in this transcendental sound vibration without any previous qualification and dance in ecstasy. We have seen it practically – even a child can take part in the chanting, or even a dog can take part in it.”

On the evening of the last festival in Ustronie Morskie, I walked around the event for the final time. I felt a sinking feeling in my stomach. I couldn’t imagine life after the festivals. My feelings of separation intensified when I walked in to Sri Prahlad’s seminar, “The Art of Happiness,” and heard him ask the audience, “What were the five happiest moments in your life?”

An older woman raised her hand. “Young man,” she said, “the five happiest moments in my life were the five times I have attended this festival.”

Another woman raised her hand, “This is my first time at your festival,” she said. “But I can understand what she means. The happiness is evident in your faces.”

I left to go to the stage for the final kirtan. It was 10pm, and more than
1,000 people were still present. As I walked up the stairs to the stage, I thought about how it would be another nine months before we would be back on the beaches chanting, dancing, and holding festivals for thousands of people daily.

As I sat down before the harmonium to begin singing, I looked out at the huge crowd stretching back 100 meters. Pausing for a moment, I closed my eyes and prayed to the Lord for the mercy to share the nectar of His holy names with such people for as many years, or as many lifetimes, as He saw fit. I could think of no better fortune, for I know such festivals give the greatest pleasure to my spiritual master.

“Regarding your proposed festivals, yes, that is a good idea. Please do it very nicely. These public festivals have proven very effective in spreading knowledge about Krsna consciousness to all the citizens. In fact, I have directed the GBC to organize such festivals and traveling sankirtan throughout their zones. The festival we are holding at present in Delhi has been extremely successful, and by Krsna’s grace everyone is appreciating this movement by seeing the beautiful Deity worship, by hearing the melodious kirtan, and by seeing the bright faces of my students.

Ghee Lamps in a Bag and the Lord in My Hands