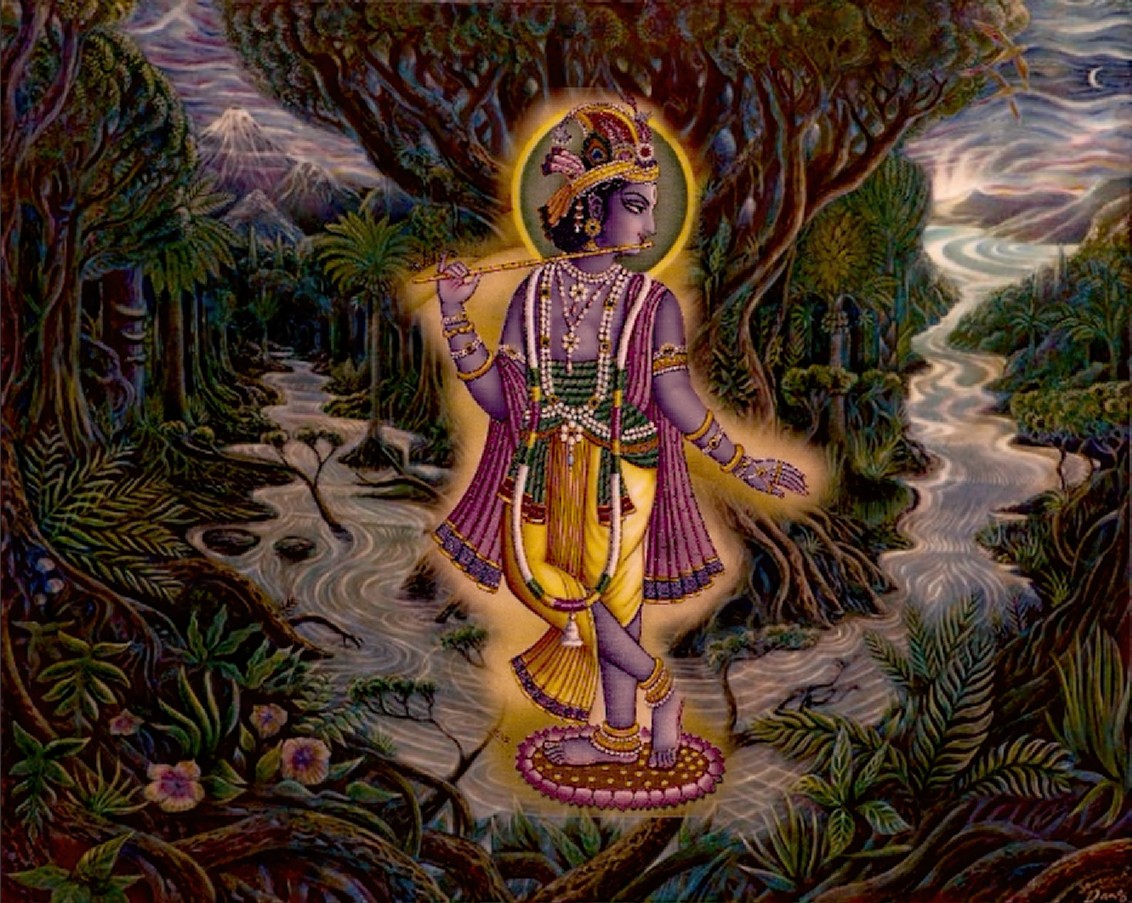 The Deep Ecology movement is rooted in the conclusions of Professors Lynn White and Arne Naess. By the late 1960s, Prof White, a historian and university president who had studied the development of technology from medieval times to the present, published “The Historical Roots of Our Ecologic Crisis”. In that influential article, he identified society’s mentality of anthropocentrism (human-centrism) as the root cause of the ecologic crisis. Shortly after that, Prof Naess, philosopher and environmentalist, coined the term “deep ecology”. Similar to White, deep ecologists are those who see the need for a change in mentality, philosophy, or morality with regard to nature. They actively promote a nature-centric worldview. Shallow ecologists are those who wish to correct environmental problems, but without giving up the anthropocentric relationship with nature that the deep ecologists so adamantly oppose.

Vedic culture, which thrived in India thousands of years ago, came to experience similar tensions regarding society’s relationship with nature. Over time, many who followed the Vedas developed an anthropocentric view of life. Early on, they had been more nature-centric, being part of an agrarian society and worshiping the higher powers in order to synchronize humanity’s interests with those of nature and the Supreme Lord. Nevertheless, they gradually became more concerned with human interests, albeit in a less selfish and more natural manner than today’s exploiters of the environment. In reaction to the degradation of Vedic culture, several reform movements emerged. Some of them extracted overlooked themes in Vedic culture and reprioritized them, while others rejected the Vedic literature and its social applications in favor of a more complete doctrinal and social overhaul. Of particular concern to most of these movements was animal slaughter. According to the Vedic tradition, the priests could sacrifice animals, which would then be elevated in their next births. However, over time, the sacrifices became ineffective; the priests no longer possessed the mystical power to synchronize the needs of humans, animals, and plants, with those of the higher powers, the gods. In other words, the priests and their patrons performed sacrifices for selfish ends. The ritual killing of animals no longer mitigated sin, but heaped sins on humanity.

Several movements that were concerned with such violence and exploitation of nature broke with Vedic tradition, and out of those Buddhism and Jainism survived and flourished. Both established a non-violent perception of the world. Such a perception diminished the previous human-centric tendencies, and ceded more rights to nature.

Even prior to these movements, others emerged that did not reject the Vedas or Vedic social structure. However, they put aside the Vedas in favor of their corollaries, the Upanishads. They retired the Vedas, not because of any fault in them, but due to the people. The influence of time had caused them to become greedy, selfish, and unable to apply the Vedas properly. Foremost among these ancient reform movements was that of Krishna, whom his followers consider either an avatar of Vishnu or the original source of Vishnu. He presented His teachings in the Bhagavad-gita, “Song of God”, which has become the basis for most of Hinduism.

Krishna’s Gita retains a perspective on the Vedas, and yet focuses on the yoga tradition as well as Vedanta (essence of the Vedas), whose philosophy was established by the Upanishads and Vedanta Sutras. Based on these doctrines, Krishna extracts at least three themes that directly relate to deep ecology. First is the concept of the individual soul distinct from the body. Second is the universal soul spread throughout creation. Third is yajna (sacrifice), which formed the socio-economic basis of Vedic society. Indirectly related to deep ecology, He discusses knowledge or epistemology, karma (human action), analysis of the psychophysical and metaphysical elements of the world, and humanity’s relation to the Supreme. Putting these aside, however, the first three topics are particularly relevant to ecology. In His discussion of soul, universal soul, and sacrifice, all within the context of yoga, He rejects the anthropocentric view of the world.

He begins His teaching in the Gita by establishing the nature of the soul. In contrast to those who had been misusing the concept of soul to kill animals, He explained that a person should act selflessly in the knowledge that he or she is soul, not the body. In this way, His instructions on the soul encouraged simple living and detachment from the world, not exploitation of it. In addition, He urged performance of actions, based on one’s identity as soul, within a yogic perspective. One of the goals of yoga is to control selfish desires, and in so doing, to see all beings, including animals and plants, as equal souls.

In the sacrifices of the Vedic culture, a yogic theme had existed. However, it had been minimized, and Krishna revived it. He presented yajna (sacrifice) as indispensable and interdependent with yoga and karma (action). He echoed the Vedas by saying that the gods (demigods) supply the necessities of life and one who does not offer a portion in return is a thief. The result of His teaching is that the structure of Vedic society and economy remains, but with a yogic (unselfish, non-exploitative, equal-seeing) perspective. In this way, He redefined Vedic yajna, a pantheistic practice that had degraded into selfish anthropocentrism. His yajna became a devotional, spiritual, intellectual, or altruistic practice that removes human-centrism and replaces it with yogic selflessness, which is consistent with the spirit of the Vedas.

The concept of the universal soul is another important part of the Vedas, and, along with the individual soul, Krishna emphasized this worldview. A recurring theme in the Vedas is that humanity is an integral part of or one with the total environment. For example, parts of the Vedas extol the pervasiveness of fire and the sun. In this context, priests offered some Vedic sacrifices to the universal soul, Vaishvanara, which is also a name for the sun. In addition, they placed their offerings into the fire (Agni), who is not just a localized flame, but also a deity who is a pervasive representative of the gods, and who consumes offerings on their behalf. The concept of the universal soul is one of the great, mystical aspects of Vedic culture. In His Gita, Krishna emphasizes everyone’s relationship with the Supreme Soul, whom He describes as the dear friend in each person’s heart, and the enjoyer of sacrifices. A goal of yoga is to turn one’s attention inward toward the universal soul, away from selfish exploitation of the world.

Many great thinkers have wrestled with humanity’s complex relationship with nature, which includes its inescapable exploitation and destruction. Humans do not exist separate from nature, including its plants, animals, inanimate objects, and the gods, or their processes like the wind, sun energy, rain, seasonal cycles, and so on. Humans often delight in nature’s gifts, but do not like to reciprocate with her; they do not mind being violent toward nature, but do not appreciate her violence toward them. Deep Ecology recognizes these tensions, and encourages a moral response.

Over time, worldviews yield in some degree to the greed of humans. Indeed, as millennia have gone by, some greedy people also infiltrated Krishna’s movement, Vaishnavism. In order to address this problem, five-hundred years ago another great reformer, Sri Caitanya, again tried to purge the impure elements from individuals and society by further simplifying sacrifice, and re-emphasizing the theo-centric or Krishna-centric way of life. In doing so, He embraced trees, taught animals to chant Krishna’s name, worshiped the holy rivers, and generally taught his followers to see Krishna in all things. He reaffirmed the Gita teaching that everything belongs to the Supreme Lord, and those who see otherwise are in illusion. Today, most Vaishnavas make efforts to lead a theo-centric life. They struggle to remember that they are souls who are equal to the plants and animals, and that they are not their bodies, with the associated desires to exploit and kill the Lord’s nature. They try to remember that the universal soul or Supreme Soul is their friend who is in their hearts and who with love beckons them to turn away from violence and exploitation.

Recent Vaishnava sages, like Prabhupada and his predecessors, envisioned the great contributions that the Vaishnava and genuine Vedic perspectives can make in a world of selfishness. They became Vaishnava activists and requested their followers to practice Krishna-centrism, which includes a non-anthropocentric relationship with His nature. Moreover, they urged their followers to propagate that view. There are more than half a billion Vaishnavas around the world. By Krishna’s grace and that of His divine nature, their struggles to have a deep ecological impact in the world will be successful.

In Devotees We Trust
The Lake of Death: A story from Mahabharata