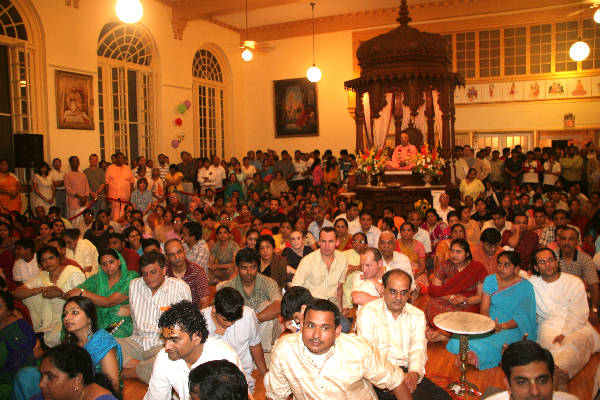 His Holiness Romapada Swami then gave a discourse about the significance of Janmastami, the day Sri Krishna appeared. He urged everyone to get purified by chanting the holy name.

Enchanting chanting and a powerful discourse of His Holiness Radhanath Swami kept the congregation spellbound. He said among other things: “Without love there is no happiness. Sri Krishna is all attractive universal God. Srila Prabhupada said that he had come to America to enlighten, and not to convert.

Kalash Abhisheka to the Deities of Sri Sri Radha Krishna was offered by each of the sponsors.

Girish Parikh then described some of the media work being done, and thanked editors and publishers of newspapers for publishing press releases, reports, etc. about the programs of the Temple.

Children performed the drama “Blind following the blind.” Sanjaya Shrama and his friends performed the humorous play “Who is the real devotee.” It revealed that merely performing rituals doesn’t make a real devotee, what is needed is a simple and pure heart and fulfillment of one’s duties. Sachi Patel performed bharat natyam beautifully.

Maha-Prasadam was then served. Over two thousand people had darshan and enjoyed the Janmastami program.

The day after Janmastami is called Parna (meaning a swing — as child Krishna is swung in a swing). The day of Parna is also the appearance day of Srila Prabhupada. It was celebrated as “Vyasa-Puja”.

Pushpanjali (flower offerings), Arati and kirtan, along with abhisheka of Srila Prabhupada were then performed, and Maha-Prasadam was served.

The master of ceremony was Subuddhi Krishna Das for both Janmastami and Vyasa-Puja programs.

Kindly come to the Temple regularly on Sundays at 5 pm, and to attend the special festivals. This will enhance your spiritual life and love and devotion for Sri Krishna.

If you cannot come to the ISKCON Chicago Temple, please check programs at the ISKCON Temple near you.

*Girish Parikh is a Chicago-based Author & Journalist. E-mail: girish116@yahoo.com. He was inspired to write this feature-report by Sunil Madhava Das.
Photo courtesy of Satyabrata Mahapatra.

Calling the next generation of Iskcon Leaders