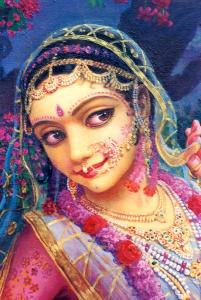 Then, placing Her glorious transcendental form in (the womb of) King Vrsabhanu’s wife, Sri Radha descended into a great palace in a garden by the Yamuna’s shore.

As Krsna appears and disappears independent from the laws of nature so His eternal consort Sri Radha acts. Sri Radha, Srimati Radharani and Sri Radhika all indicate the one who perfectly worships the Lord. The words Sri and Srimati are titles indicating opulence and beauty. Sri Radha descended onto this planet and entered the womb of her mother, by Her own will (avesya rupam). She was not forced to take birth through reproductive processes in the material world as other souls are.
Sri Radha is originally manifested from half of Lord Krsna’s body as explained in Padma Purana:

Sri Radha is the original potency of the Supreme Personality of Godhead. She is beautiful, graceful, saintly and full of all transcendental qualities. She enjoys pastimes in the forest of Vrndavana. She is manifested from half of Lord Mukunda’s transcendental body.

Discussing the verse above, Sri Raghava Pandita Gosvami quotes from the Sammohana-tantra, Patala 1:

It is also said that according to the Brahmavaivarta Purana, Sri Radha was born from the left side of Krsna. Then Srila Raghava Pandita Gosvami further quotes the Govinda-Vrndavana-sastra, where Sri Krsna says to Balarama:

O Balarama, please listen and I will tell You something. One day, taking My flute, My heart full of bliss and My form bending in three places, I went under a kadamba tree and, seeing My own form reflected in a splendid golden platform studded with jewels, I became enchanted. At that moment My heart became filled with the sweet happiness known as conjugal love, which charms the entire world. My heart now desires to become a woman. I yearn to enjoy Myself as a woman.

As the Lord thought in this way, His heart approached itself. From the sweetness of His heart came bliss and from the bliss came Himself, manifested in a second form, a female form of transcendental bliss that could experience the direct perception of Himself.

At that time a goddess, whose form was nectar, whose fair complexion was like a host of lightning flashes, and who was decorated with glittering ornaments, appeared from the Lord’s left side. She is known as Radha, who is half of Krsna’s body, and who is the mistress of all potencies.

This is also described in the Govinda-Vrndavana-sastra, where Lord Krsna says to Balarama:

My beloved Radhika is the form if My three transcendental potencies. As I am beyond the touch of matter, so is She, whose form is My potency. Manifest in three forms, I am spiritual, My form is beyond the touch of the three modes of matter. I am the master of everything, and She is the mistress of this master of everything. She is said to be the kriya-sakti. She has the same sweetness as the other two saktis.

Sri Krishna’s three potencies (tri sakti) are the potency of desire (iccha-sakti) the potency of knowledge (jnana-sakti) and potency of action (kriya-sakti).
In the Varaha-samhita, the seven coverings of the material world and the transcendental abode of Vrndavana are described as follows:

Above that is a great platform made of gold and studded with rubies, and on that platform is a charming lotus flower with eight petals.
This is the favorite place of Sri Govinda. How is it possible to fully describe it’s glories? Sri Govinda, the gopis’ beloved, stays there. By His touch it has become fragrant with many flowers.

The Lord’s beloved Radhika is His dear original potency. Durga and the other goddesses in the world of the three modes are a million-millionth part of a part of Her.

Thus Srila Raghava Pandita Goswami concludes that all potencies of the Lord are manifested from Sri Radha. This is explained in his Sri Krsna-bhakti-ratna-prakasa (The Splendor of the Jewel of Krsna-bhakti) Volume 2 Fifth Ray of Light; Third Part, verses 42-58.